The trailer for the Amazon Prime series ‘Bestseller’ was released and the lines between fiction and reality blur in this nail-biting thriller.

"I instantly knew it would make for a fascinating watch."

Reality and fiction blur as the trailer for Amazon Prime Video’s new series Bestseller was released.

In desperation, Tahir uses her story for his own novel.

But soon enough, the lines between fiction and reality begin to blur and a trail of dead bodies follow as their hidden motives are revealed.

Meanwhile, ACP Lokesh (Mithun) steps in to investigate and unravel the mystery.

Bestseller is directed by Mukul Abhyankar. He said:

“As soon as I read the script, I found it so exciting and thrilling, that I instantly knew it would make for a fascinating watch.

“My experience of working with the cast and crew and shooting with this exceptionally talented team at some of the most authentic locations in the country has been amazing.

“I am certain the audience is going to love every suspenseful minute of the series and will be left asking for more by the end of the eighth episode!”

Mithun Chakraborty, who is making his OTT debut, said:

“I couldn’t have asked for a better streaming debut. I have a lot of faith in Mukul Abhyankar and believe he has done a commendable job in developing an extremely entertaining thriller.

“Bestseller will definitely appeal to suspense and thriller fans across the globe, and I am looking forward to it.”

Shruti Haasan stated: “I am thrilled that Bestseller is my full-feature digital debut.

“When Siddharth [Malhotra] reached out to me for Bestseller, I was working on a number of projects and wasn’t sure if I could make this commitment, but the moment I went through the script, I couldn’t put it down.

“I was hooked to the layers in the story and found my character so compelling that I just had to do it.”

“I always wanted to enter this space with a female lead story and it was an amazing opportunity to play a character I couldn’t pass up.

“I have worked hard to prepare for my role and I am really looking forward to seeing the audience’s reaction to the series.”

Arjan Bajwa added: “The story of Bestseller is one that will have the audiences completely riveted – each character is so distinct, played to perfection by the very talented cast, expertly guided by the vision of Mukul.

“The entire narrative is so intriguing and well-layered.

“I am quite excited about my role as Tahir Wazir, a successful and assertive writer, whose life undergoes drastic twists and turns when he crosses paths with a stranger.

“Given the multiple layers to the character, it was a challenging role to play, but at the same time a fantastic experience as an actor.

“I cannot wait for Bestseller to reach viewers across the world.”

Bestseller will stream on Amazon Prime Video on February 18, 2022.

Watch the Trailer for Bestseller 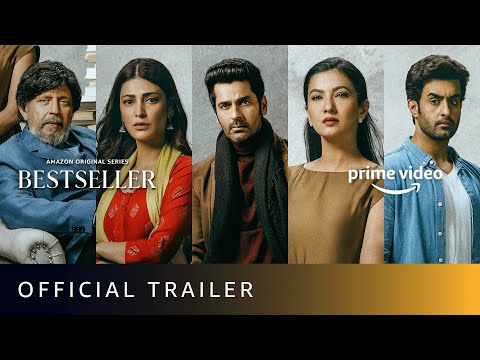 Dhiren is a journalism graduate with a passion for gaming, watching films and sports. He also enjoys cooking from time to time. His motto is to “Live life one day at a time.”
Karan Kundrra says Tejasswi Prakash ruined his Image
5 Things You Didn’t Know About Shannon Singh