Amir Khan’s wife Faryal Makhdoom celebrated her 29th birthday in style. She enjoyed her special day on a luxury yacht in Dubai.

On July 27, 2020, Faryal Makhdoom celebrated her 29th birthday on a luxury yacht in Dubai.

Her husband Amir Khan organised a special party on the lavish Babylon, making sure to let his wife know how much he appreciates her.

Amir documented his wife’s birthday on his social media, giving his fans an insight into the lavish celebrations.

On his Instagram story, Amir revealed an extravagant cake for his wife, which they cut together. The mother-of-three had a huge smile on her face as they cut the cake.

Faryal sported a dark ensemble with a long flowing jacket and a flash of midriff.

She also had her hair in a sleek, loose style and paired it with heavy makeup.

In another clip, Amir was seen cutting the cake by himself which resulted in some of it toppling over.

Close friends were also seen at the small but lavish party, enjoying the celebrations. 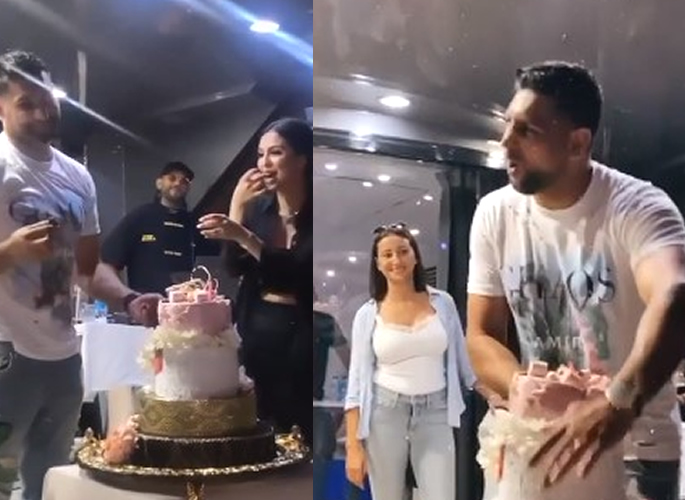 The day before, the boxer revealed to his fans that he would be organising a celebration for Faryal in Dubai.

He tweeted: “Happy birthday to my queen Faryal Makhdoom love you baby. Doing a big celebration for her in Dubai.”

The former world champion said that he organised such a big party because Faryal deserved it for being a great wife and mother.

The couple were also at Marbaiya Restaurant where Amir had a surprise for his wife.

He had a special cake delivered to their table and servers waved lights while an announcer sang ‘Happy Birthday’ and messages were on screens.

Faryal looked elated as she watched the performance.

Amir posted the video on social media and captioned it: “Happy birthday Faryal Makhdoom love you.”

The birthday celebrations come two months after Faryal and Amir visited his parents, seemingly putting an end to a long-running feud.

The boxer’s family visited his parents at their home in Bolton.

The reunion was an emotional one because it was the first time Shah and Falak had met their three-month-old grandson, Muhammad Zaviyar.

The get-together was the first time since December 2018 that Mr and Mrs Khan had seen their son and Faryal and their two other grandchildren, Lamaisah and Alayna.

A source said: “It was a very emotional reunion because both Shah and Falak have really missed not seeing Amir and his family.

“They were also devastated that they had not seen their grandson and there were a lot of tears and joy when they laid eyes on him for the first time.

“There’s been a lot of harsh words exchanged between the two sides over the past few months, but this current coronavirus situation has made them see what’s really important. And that is your family.”

Dhiren is a journalism graduate with a passion for gaming, watching films and sports. He also enjoys cooking from time to time. His motto is to “Live life one day at a time.”
University Student funded Education by Selling Drugs
Indian Man stabs Wife in Dubai suspecting Infidelity