With watches being a popular fashion accessory, we look at the luxurious and expensive watches worn by Bollywood celebrities.

"The designs, in particular, are simple and elegant"

They are more than just for looking at the time. Lavish and potentially expensive watches are the ultimate fashion accessory.

Watches are what make up the whole outfit, they enhance one’s fashion style.

The traditional watch fell out of favour following the rise of the smartphone, which not only tells the time but does so much more.

However, it recently has gone back into the mainstream as it is proving its worth once more.

This is due to technological advances in the watch industry. Manufacturers market solar and kinetic watches, some are also equipped with GPS.

Visual aesthetics and the brand are also vital when choosing a watch to wear.

Celebrities are also big fans of watches, they are often seen with some of the most expensive watches that money can buy.

Bollywood celebrities are the same as they also want to make style statements.

Because of their massive following, anything that they wear will instantly trend no matter the cost of the item.

This includes watches where many Bollywood stars have been pictured with luxury time-pieces. 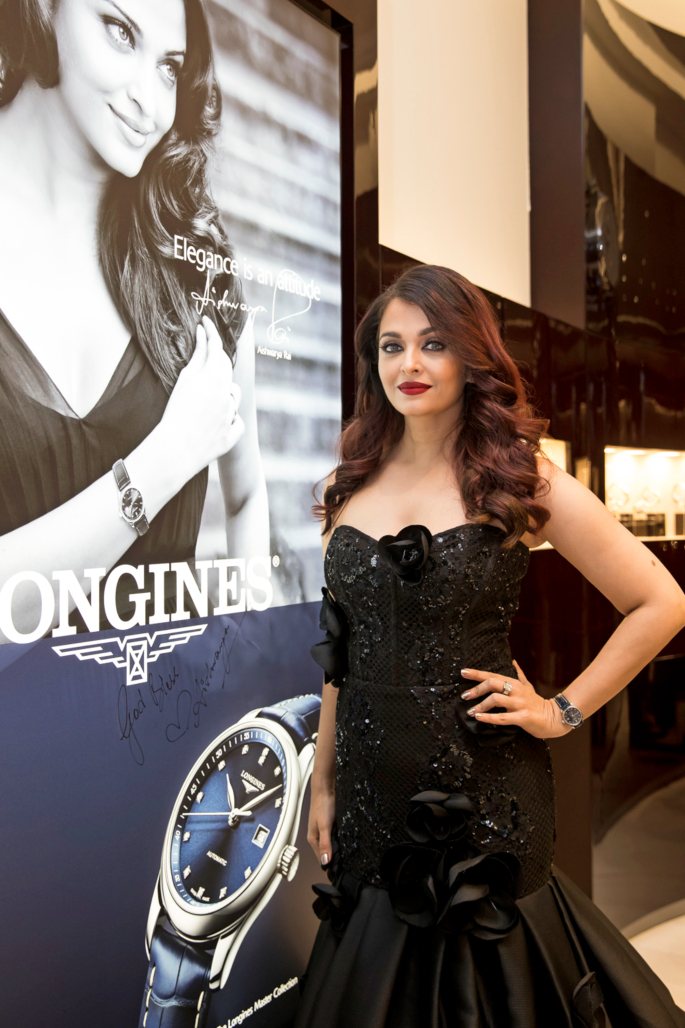 Her preference for the French brand is because she is an ambassador for Longines.

She has been part of the brand since 1999 and has promoted it at many events.

At the 2010 French Open tennis tournament in Paris, the actress presented former tennis player Gustavo Kuerten with the Longines Prize for Elegance.

Not only does Aishwarya wear and promote the watch brand during her spare time, but she wears them during some of her films.

For example, she wore a Longines during the 2008 film Sarkar Raj.

When talking about the brand, Aishwarya said:

“I have been a brand ambassador for Longines for 11 years and that has been a good part of my career.”

“The designs, in particular, are simple and elegant. They’re not in your face, which is great.”

These days Aishwarya is often wearing the brand’s latest collection, called the DolceVita. 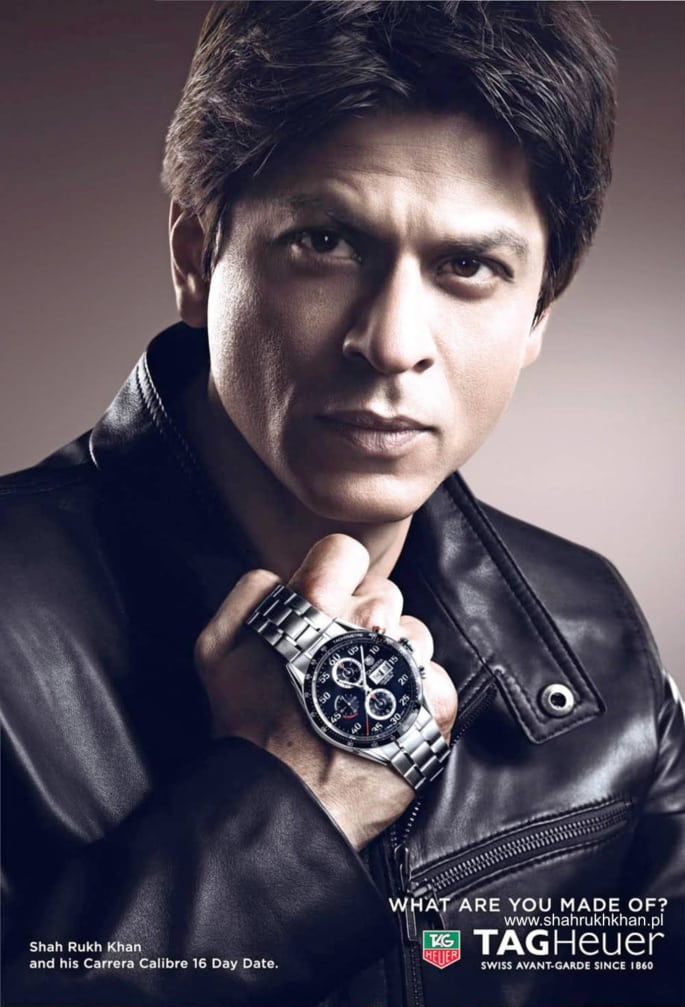 The Badshah of Bollywood is one to have changed allegiances when it comes to wearing watches.

Shahrukh Khan made Swiss brand TAG Heuer a name to be reckoned with in India when he became ambassador in 2003.

However, the cost of the watches did not help increase the market in India and Shahrukh was no longer the TAG Heuer ambassador.

Recently Shahrukh has switched his preference to classic brand Rolex and has been spotted several times sporting one.

At the promotional event for Jab Harry met Segal, the actor was spotted wearing a Rolex Cosmograph.

The Cosmograph is Rolex’s most prized chronograph, which was first introduced in 1963. The name comes from the races it timed at the Daytona Raceway.

The scale on the watch allows drivers to measure speeds up to 248 MPH and comes with a rubber, leather or steel strap.

Shahrukh’s watch has a white gold dial with a steel strap.

This Rolex costs around £13,000 (Rs. 12 Lakhs) and despite the hefty price, this may not be Shahrukh’s most expensive watch in his collection. 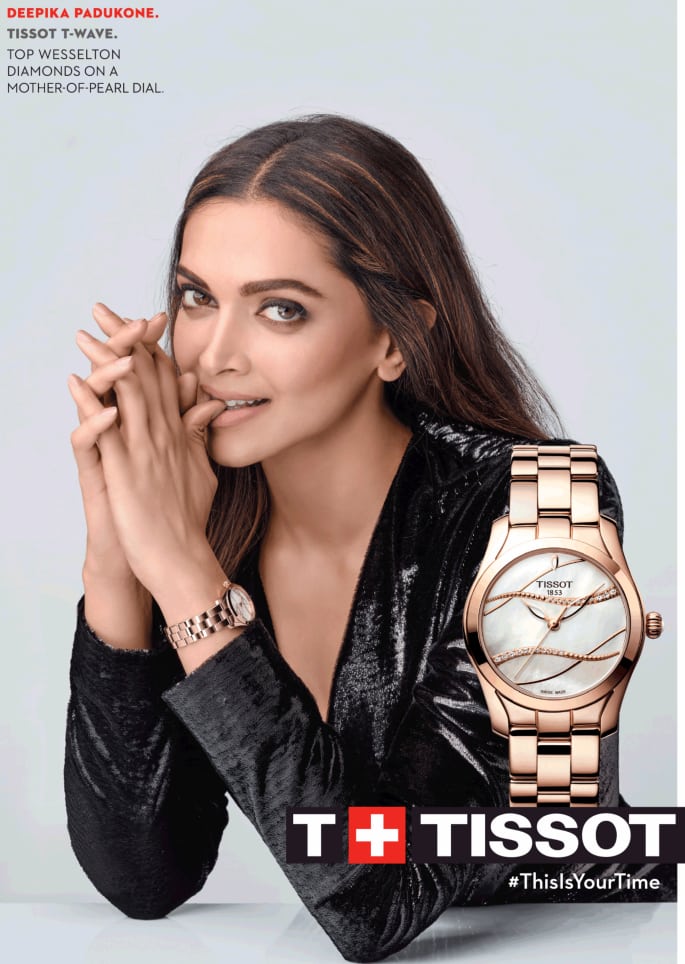 As well as having her own clothing brand, Deepika Padukone is also a watch enthusiast as she is the brand ambassador for Tissot.

She became the Swiss company’s ambassador for India in December 2007 after the success of Om Shanti Om, which catapulted her into the limelight.

Tissot appointed her as she became the “Face of a New Generation”, following her lead debut in Om Shanti Om.

Deepika is the first Indian ambassador for Tissot which is to expand the market to South Asia.

When asked about her thoughts on being a Tissot ambassador, Deepika said:

“Like Tissot, I stay in touch with the times, yet remain traditional.”

Deepika added: “We are both adventurous, sophisticated and classy, yet very approachable.”

Representing Tissot has given the actress great rewards, such as a diverse collection of lavish Tissot watches for any occasion. 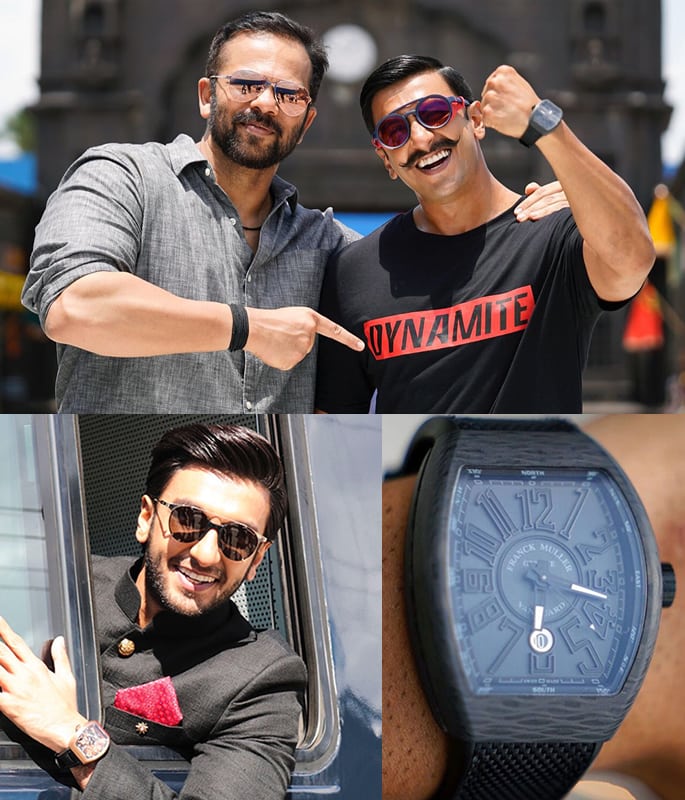 Flaunting expensive watches is something which Ranveer Singh does well.

Although he is not an ambassador for a luxury watch manufacturer, he still possesses expensive watches.

For his 32nd birthday, which was on July 6 2018, he received a Franck Muller Vanguard Automatic watch from Rohit Shetty, the director of his film Simmba.

The all black watch made Ranveer ecstatic and immediately took to Twitter to flaunt his new gift and to say thanks to his boss.

The Franck Muller watch that Ranveer is sporting costs a hefty £6,500 (Rs. 6 Lakhs).

The watch collection prides itself on clean and innovative aesthetics.

It is a collection known for the distinctive numerals which have been hand-polished and hand-brushed.

A sporty elegance is clear, especially with the final touches of the dial and crown. 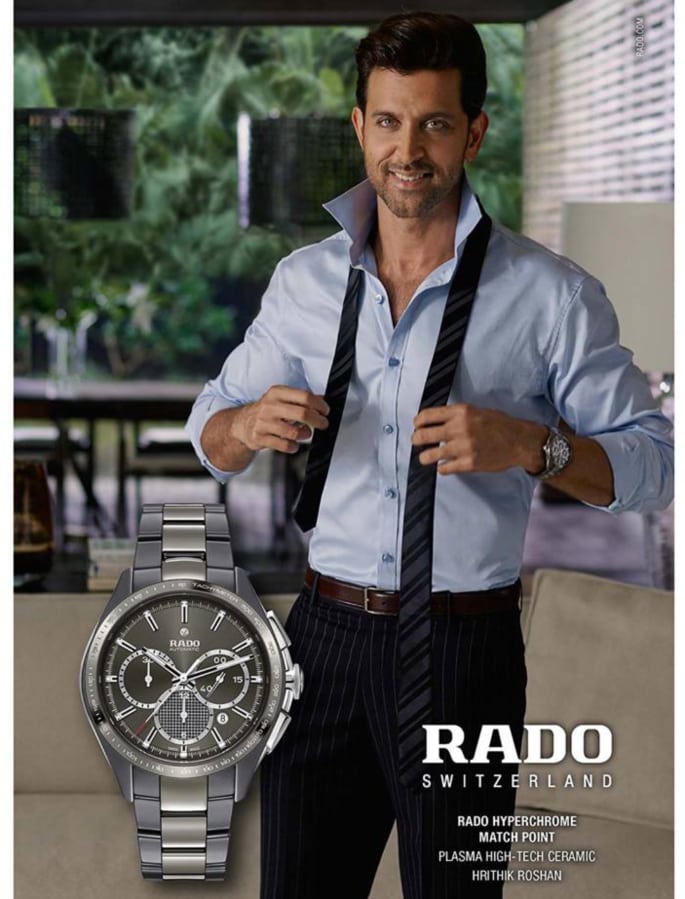 Since 2011, Krish actor Hrithik Roshan has been the brand ambassador for Rado which are considered to be stylishly understated.

They offer the best of both worlds. It goes well with everyday work wear and has a sportier edge to it.

The innovative design and materials are something which Hrithik is a big fan of.

He said: “The innovative range is my personal favourite because every timepiece reiterates my personal sense of style.”

Hrithik has been a fan of the Swiss watch brand for a long time and his personal favourite is the new HyperChrome collection.

This is because they offer an elegant take on Rado’s distinctive new designs.

Hrithik is proud to be part of Rado saying:

“The brand has been an important catalyst in making the watch industry smart, relevant and chic.”

Hrithik’s loyalty to Rado is something which is evident as many variations of the brand are part of his watch collection.

It is not just Bollywood celebrities who are aficionados of expensive watches.

Many sporting icons of India flaunt their time-pieces such as Sachin Tendulkar.

Many Bollywood stars flaunt their watches as a way of promoting the brand they are endorsing. The deals for these promotions are all part of their worth.

Watches will continue to become a major fashion accessory, especially, when luxury brands create new and unique styles, and Bollywood stars will certainly be seen wearing them.