Bollywood Stars who own Rolex Watches

Rolex is considered one of the top luxury watch brands and are a favourite among celebrities. We look at some Bollywood stars who own Rolex watches.

Priyanka’s choice of Rolex is the Cosmograph Daytona.

Rolex is one of the leading watch brands and is a favourite among several Bollywood celebrities.

They are lavish and expensive which make them the ultimate fashion accessory as they complete one’s entire outfit.

In general, watches have regained their popularity in recent years as a result of technological advances in the industry.

The Rolex brand is synonymous with luxury watches as they have been designed with precision and its inner mechanics are hand-assembled.

The result is an elegant and sophisticated timepiece. They do come at a price though which is why many celebrities flaunt their wealth by owning a watch from the Swiss brand.

Bollywood stars love wearing Rolex watches and have one or more in their collection.

Some have even become ambassadors for the iconic watch brand. We present a few Bollywood celebrities who own Rolex watches. 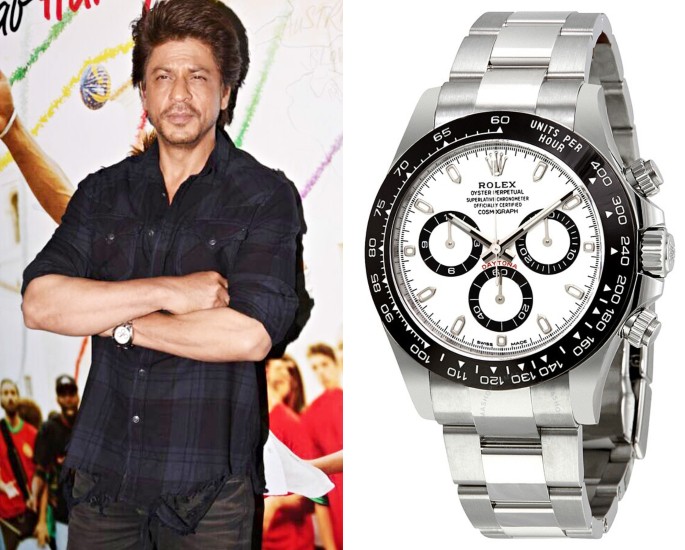 For a long time, Shahrukh Khan’s loyalty lied with TAG Heuer as he was its ambassador, but after the market struggled to increase in India, SRK was no longer an ambassador.

He later switched his preference to Rolex and has been spotted out and about wearing one.

At a promotional event for Jab Harry met Sejal, the actor was spotted with a Rolex Cosmograph Daytona.

Since its introduction in 1963, the watch model is Rolex’s most prized chronograph and its name comes from the races it timed at the Daytona Raceway.

The watch comes with a rubber, leather or steel strap along with a number of dial options including one with 18-carat gold.

Shahrukh’s one appears to have a white gold dial with a steel strap.

Although this Rolex is priced at £13,000 (Rs. 12 Lakh), it may not be the most expensive watch in his collection but he is able to pull off this look. 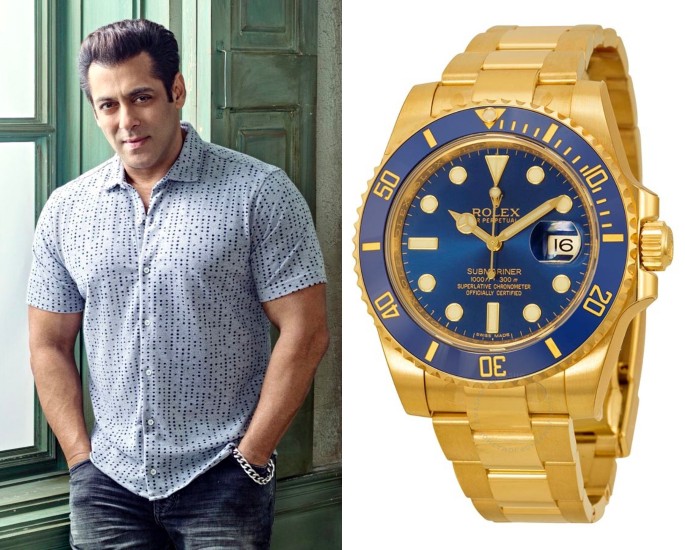 Salman Khan’s fondness for Rolex watches has been a thing since he was a young boy. The brand name stuck with him ever since he asked a friend to “borrow his watch for a day.” He replied: “Are you mad. I can’t give you my Rolex.”

Since then, they have become a prominent accessory to his fashion choices for different occasions.

The actor has a particular liking towards the Rolex Submariner models as it is easy to see why.

They have a robust and functional design which has remained since the original model launched in 1953. The Submariner has since become an iconic Rolex watch.

It has a distinctive dial with large luminescent hour markers and a solid link Oyster bracelet. They range in a number of designs from steel to two-tone steel and gold to even full gold, there is one to suit a number of customers.

Salman doesn’t just love to collect them he is also a firm believer in gifting them to people who visit his home. He invited several Sri Lankan cricketers to his home and each gifted them a Rolex watch as they were leaving.

The generous act in 2007 is somewhat of a tradition as he hands out lavish gifts to first-time visitors to his house.

Salman’s watch collection is ever-growing but he also spares no expense when comes to treating his guests. 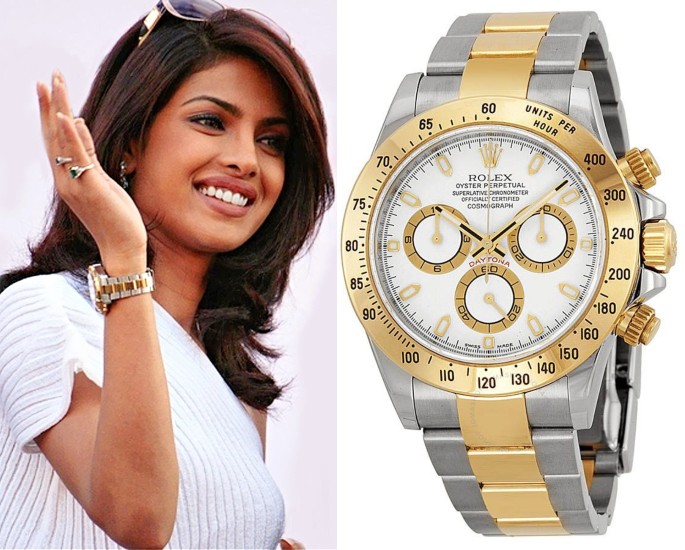 Actress Priyanka Chopra is a huge fan of Rolex and has been spotted several times wearing a number of different variations.

The actress has also worn the brand in some of her films, especially since she expanded her ventures into Hollywood.

In Baywatch, her character is described to be wearing “a big men’s Rolex on her hand.”

When it comes to being out and about, Priyanka’s choice of Rolex is the Cosmograph Daytona.

It is an iconic model by the brand so it is no surprise that one of Bollywood’s most famous stars has opted for that particular style.

She has multiple variants of the Cosmograph Daytona but one which stands out is the two-tone one.

The combination of stainless steel and gold adds that touch of class as the gold shimmers in the light.

While it is likely that there are many more watches in Priyanka’s collection, this is one which stands out a lot. 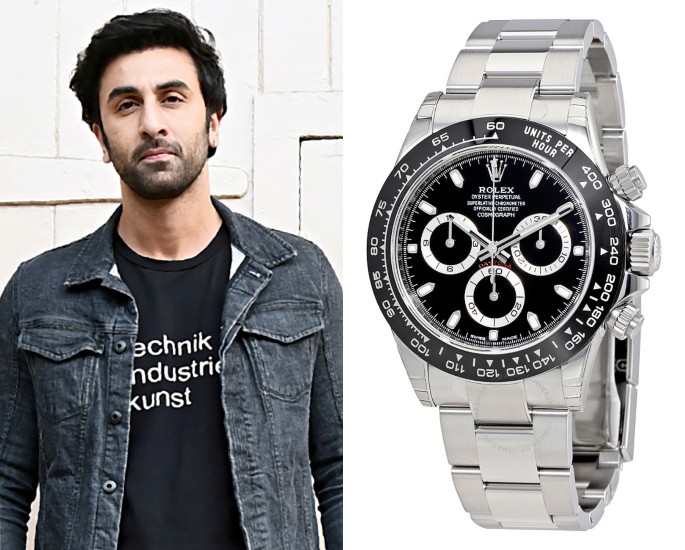 Ranbir Kapoor is known for owning a luxury wardrobe as he is regularly seen wearing designer labels even if it is for casual wear. He also owns a huge collection of expensive trainers.

The Sanju actor even has a lavish collection of watches made by various brands. This includes a sophisticated silver Rolex Cosmograph which he got as a gift.

When Ranbir was dating Katrina Kaif, she gifted him the lavish watch for his 32nd birthday. It was an extra special gift which cost an eye-watering amount.

According to reports by Bollywood Life, it is said to have cost Rs. 1 Crore (£112,000). It may be expensive but it has an air of class just by looking at it.

The silver watchstrap contrasts well with the dark watch face and dial. They have an added depth thanks to the white details within.

It may look like a simple design but it is one which is done very well.

This Rolex design will certainly make a statement when worn alongside any type of outfit. It is a classic watch which is made with precision and worn to make a fashion statement. 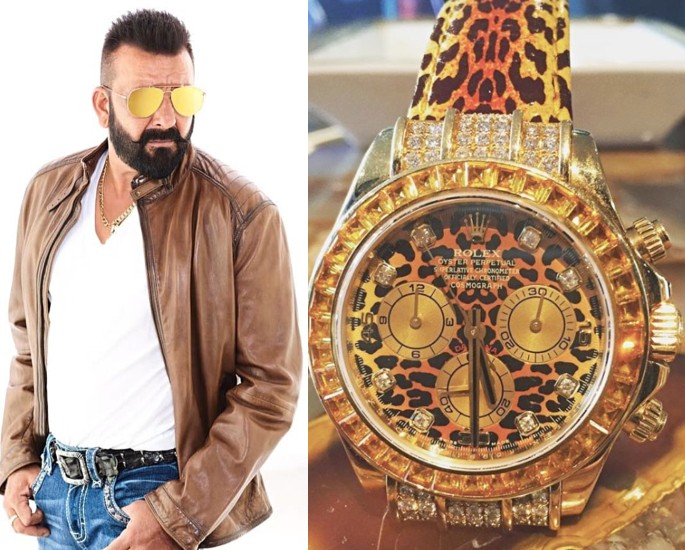 Sanjay Dutt is one of Bollywood’s wealthiest stars and he knows how to show that wealth off with some of the things that he owns.

This includes a wide array of watches, many of which are made by Rolex. His loyalty to the Swiss watchmaker is evident as he is either posting pictures of individual watches on his social media or spotted sporting one.

While his collection includes a gold Rolex GMT Master II with a green watch face, that is not his standout piece.

One of the most extravagant Rolex watches in Sanjay’s collection is the limited edition Leopard Daytona. Low production of this watch is due to the limited availability of yellow sapphire.

This Rolex uses 36 of the precious gems to ornate the bezel. In addition, eight diamonds represent the hours and the leather strap features shaded leopard print.

Sanju is one of the few people to have this rare timepiece and posted a picture of the watch on his Instagram along with the caption: “Rolex, the leopard nice watch.”

Because of the limited quantities and the exotic materials used to make the watch, it does not come cheap. The actor had to part with Rs. 33 Lakh (£37,000) in order to obtain one of the most unique watches by Rolex.

It takes confidence and a lot of money to be able to carry off a watch like this.

While many of these Bollywood stars own a massive collection of watches, they do not compare to their Rolex watches especially as it is one of the most recognisable watch brands.

Many of these watches are all about the classy design with some featuring a more unique look such as Sanjay Dutt’s limited edition Leopard Print Daytona.

One thing for certain is that they all have a high price tag.