After staying away from the camera for over 14 years, Bollywood superstar Sridevi is making her comeback in English Vinglish.

Bollywood Legend Sridevi, is back in front of the camera for her comeback, after a huge gap of 14 years, making the movie one of the most awaited films of 2012. 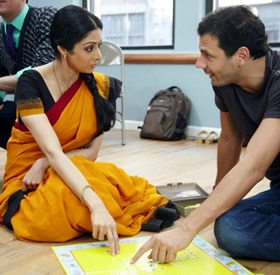 The film has also been dubbed in Tamil simultaneously, and this makes Sridevi’s comeback to Tamil cinema, after a gap of 15 years. The role portrayed by Amitabh Bachchan in the Hindi version, is played by South Superstar Ajith Kumar in the Tamil version.

The music for the film has been composed by Amit Tridevi, who’s known for the hit music for movies such as ‘Ek Main Aur Ekk Tu,’ ‘Wake Up Sid,’ ‘Ishaqzaade’ and many more.

Sridevi used to be one of the most popular actresses of Hindi cinema in the 1980’s and 1990’s. She has often been referred as “The First Female Superstar of the Indian Cinema”. She made her debut as a child artist in 1975 in the film ‘Julie.’

In 1978, she was given her first adult role in a film in Solva Sawan. Throughout her career she has worked with superstars in the industry, including, Rishi Kapoor, Vinod Khanna, Jeetendra, Rajesh Khanna, Amitabh Bachchan, Mithun Chakraborty, Rajnikanth, Shahrukh Khan and many more.

Sridevi had won four Filmfare Awards throughout her successful career, two for Hindi films, and one for Telugu, and one for Tamil films. Sridevi married producer and brother of Anil Kapoor, Boney Kapoor in 1996. After marriage she decided to retire from Hindi cinema and settle down with family.

English Vinglish looks at how money, fame and the knowledge of English play a huge role in India’s society to judge an individual. It is the story of Shashi (Sridevi), a woman who doesn’t know English and is made to feel insecure about this by her family and society at large. The story though light-hearted is about the touching and transformational journey of Shashi. Circumstances make her determined to overcome this insecurity, master the language, teach the world a lesson on the way to becoming a self assured and confident woman. 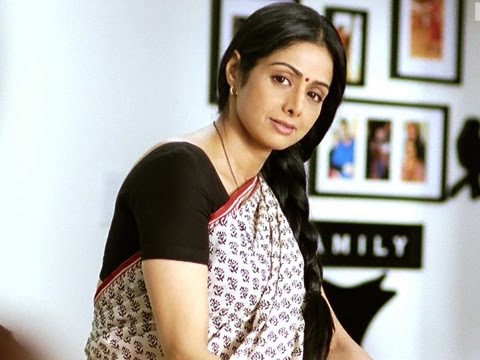 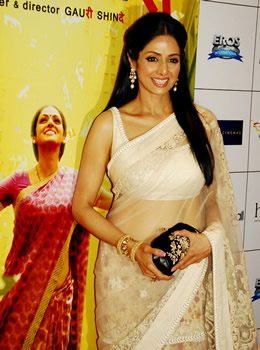 Shot mostly in New York, the film captures the inherent struggle of many people all over the world with the English Language. Hilarious, touching, sensitive, this film marks the come back of does mark the return of Sridevi.

When asked in an interview why this film was the one for her comeback, Sridevi said: “It was only because of the script. When I heard the script, I just fell in love with the script! And of course, when we [Gauri] met, something just happened. We clicked instantly!”

Talking about the film Sridevi feels it will connect with audiences, especially, those generations that have and do still struggle with English as a language. She said: “It is a happy feel good movie, very sensitive and a simple story. It happened with me also [issue of language] most of the time!”

Amitabh Bachchan saw the film in an advance viewing and posted on his Tumblr page:

“A viewing of English Vinglish directed by Gauri Shinde, wife of R Balki, leaves me with collective lumps in the throat and a surge of flushed eyes near the tear ducts. And it is not all the emotion of a particular moment that puts one in such state. It is the uncontrollable effect of appreciation that prevents one from expressing any at all,”

He added “The revelation of immense creative talent in this 100 years of Indian cinema, surprises me with each passing day. The verve and vigour and enthusiasm of the myriad hopefuls in this elaborate and exceedingly competitive profession, is to be seen and experienced.” 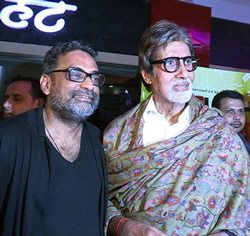 Also Bollywood actor Hrithik Roshan is also anticipating the comeback of Sridevi and said in an interview: “I am dying to see the film. I am sure it is going to be a winner all the way,”

Veteran actor Anupam Kher took to Twitter to express his thoughts on the movie “English Vinglish is Spectacularly Beautiful. Film with a Golden Heart. Take a bow Gauri Shinde. Sridevi, ORIGINAL QUEEN OF CINEMA is BACK.:)”

An exclusive screening of English Vinglish was held for the Superstar of South Cinema Rajnikanth, who was also a co star of Sridevi’s in the 80’s and 90’s.

Trade analyist Taran Adarsh gave the film 4/5 in his review and said “On the whole, ENGLISH VINGLISH is a remarkable motion picture. It’s amusing, emotional, heartrending and also insightful. An inspiring film with an overwhelming message. A must-watch for every parent, every child. Strongly recommended!”

English Vinglish will be released by Eros Entertainment and released worldwide on the 5th October 2012.

What did you think of English Vinglish?

Faisal has creative experience in the fusion of media and communication and research which increase awareness of global issues in post-conflict, emerging and democratic societies. His life motto is: "persevere, for success is near..."
Yash Raj is back with Jab Tak Hai Jaan
Karan Johar’s Student Of The Year