The Indie Pop band ‘Easy Wanderlings’ are fast becoming one of the most popular live acts from India. We present a Q&A with the Pune based collective.

"Our music is primarily easy going and nothing too heavy"

Pune Based, Easy Wanderlings is an Indie Pop collective, which has a loyal fan base in India, particularly the South.

Setting their eyes on conquering the globe, Easy Wanderlings made a super return with the album, My Place to You.

The singles from the album ‘Beneath the Fireworks’ and ‘Madeline,’ came out on  September 27, 2019.

Besides sharing a stage with Alt J and Anoushka Shankar, the band also has the support Rolling Stone, Red Bull Music and Pure M Magazine.

Following the release of their debut album, As Written in the Stars (2017), Easy Wanderlings have gone onto to perform across a large spectrum of spaces. These include Sofar Sessions and premier musical festivals all around India.

The innovate and creative Red Bull Music have gone on record to describe the collective as “Top 10 Indie artists to watch in 2018.”

In an exclusive Q&A with Easy Wanderlings, we find out more about the band: 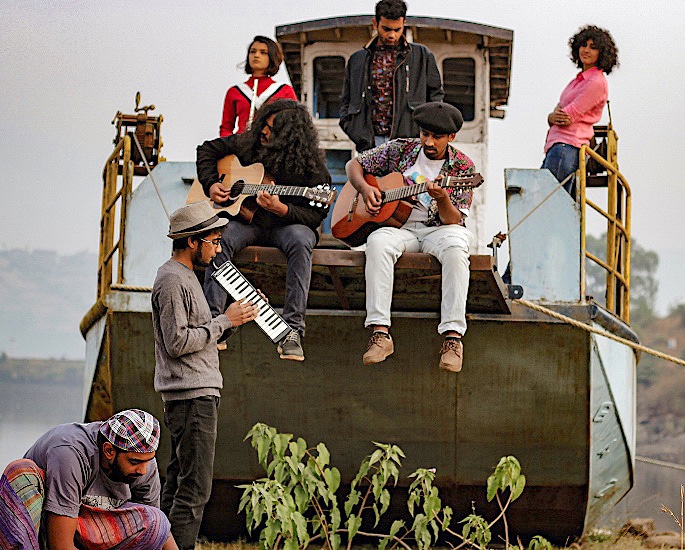 How did you form Easy Wanderlings?

The Easy Wanderlings initially started just as a way for Sanyanth Naroth (composer, songwriter) to put some music that he had written, out into the world.

Working closely with Malay Vadalkar, his friend from college who was also a maestro in sound engineering, they reached out to find a female singer through friends and friends of friends.

Literally, the first girl who walked in was Pratika Gopinath and the moment she sang a verse they knew she was the one.

After releasing our first few songs on Soundcloud and doing a few acoustic shows in the city, we were invited to play at the NH7 Weekender in Pune, one of India’s largest music festivals.

As we prepped for this massive festival, we expanded in number and added instruments that our sound required, forming the Easy Wanderlings that we are today.

Who came up with the name and why?

People often expect a crazy story behind the name, but there really isn’t one. Sorry folks.

We are just a bunch of people who make music about everyday experiences, travel, conversations and observation through many adventures during our lives.

We love to travel and wander into new places and spaces whenever we can.

Somehow Sanyanth came up with it and he knew right then that we are all a bunch of Easy Wanderlings in life and in spirit. 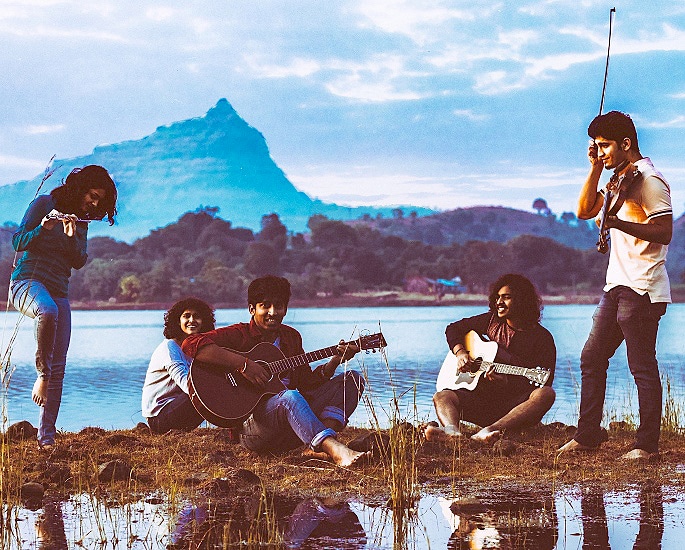 Having band members that are influenced by different kinds of music, the music of Easy Wanderlings also goes across genres, encompassing the influences of each member.

We enjoy listening to hip hop, rock, and folk music. We adore music from the era of the ’60s and ’70s.

Our music is primarily easy going and nothing too heavy on the ear. As many people often say, a perfect accompaniment with a glass of wine or tea on a lazy or rainy day, around a bonfire, or even a time to reminisce or ponder.

I think we are at a stage where we think the sound is slowly evolving and forming a new shape, especially because we are constantly surrounded by musicians, and we are getting more experimentative.

“So the next album might be quite different from the first.”

Who are the members of the band?

Sanyanth Naroth is the composer, songwriter, guitarist and vocalist of the band. After completing a Masters in Social, Entrepreneurship and working in the sector, Sanyanth found his love for composing and songwriting.

Malay Vadalkar is the co-founder, co-producer, bassist, recording and mixing engineer of Easy Wanderlings. Wearing many hats he completed his education in Sound Design from the prestigious SRFTI Institute in Kolkata.

Endorsed by Bosphorus Cymbal Company, Abraham was born in Kerala. He loves action movies, is introverted and has a really dark sense of humour.

Nitin M Krishna is a Berklee College of Music Graduate. He is chief engineer at Gray Spark Audio producing a ton of bands. He plays keyboards and takes care of the production side of this for Easy Wanderlings.

Shardul Bapat is a violinist and educator with a bottomless stomach. An engineer by education, he gave up engineering to pursue the instrument. He is India’s 3rd certified Suzuki Teacher.

At age 17, Siya is the youngest member of the band. She plays the flute and has been trained in Western classical music. 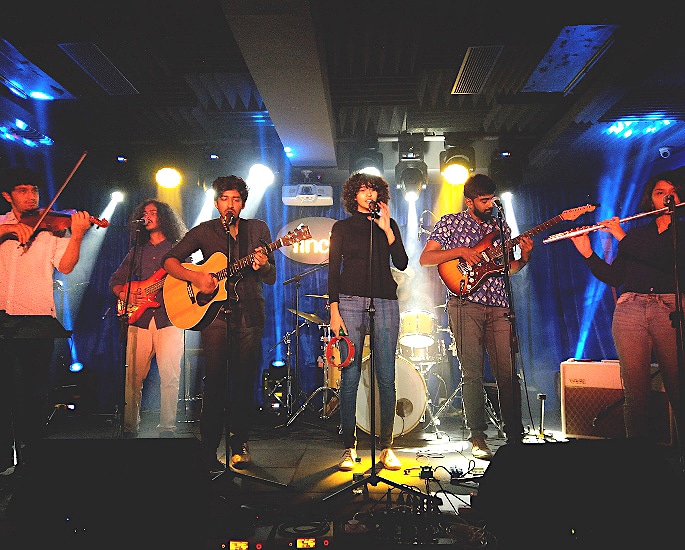 Which stage performances do you have great memories of?

We have been fortunate to have performed at some of the nicest and diverse performance spaces, be it small intimate settings or big music festivals.

It is our chance to form a different bond with our listeners. We had a lot of fun performing at the VH1 Supersonic Music Festival in 2018.

There were at least 5 different huge stages and we were one of the few non-electronic acts that were performing then and the response was fantastic.

The best kind of shows is intimate ones. We really enjoy doing Sofar sessions where people come purely to enjoy and take in the music.

Our music is just perfect for under the night sky themed and bonfire themed gigs.

Hence we were invited to perform at the Bloom in Green Festival, which took place in the Agumbe forest. There we had a magical evening with a great community of music listeners, open starlit skies and a thousand fireflies.

Is the Indie music scene growing in India?

Yes, the Indie music scene is most definitely growing, although at a slow pace.

Lately, there has been a lot of new indie bands that are being widely accepted by Indian audiences. Recording in the studio is fairly affordable. It is wonderful to see the amount of well-produced music coming out of the country lately.

“There is a rise in music venues, festivals and events to showcase the home-grown indie talent in the country.”

Although it would help if media platforms such as radio stations and music channels do more to feature home-grown independent music as opposed to the heavily dominated Bollywood music.

Few radio stations do have a time slot for featuring Indian Indie music. But we think there shouldn’t be differentiation based on the country.

Instead, Indian Indie music should be played alongside international acts one after the other and not feel the disparity. 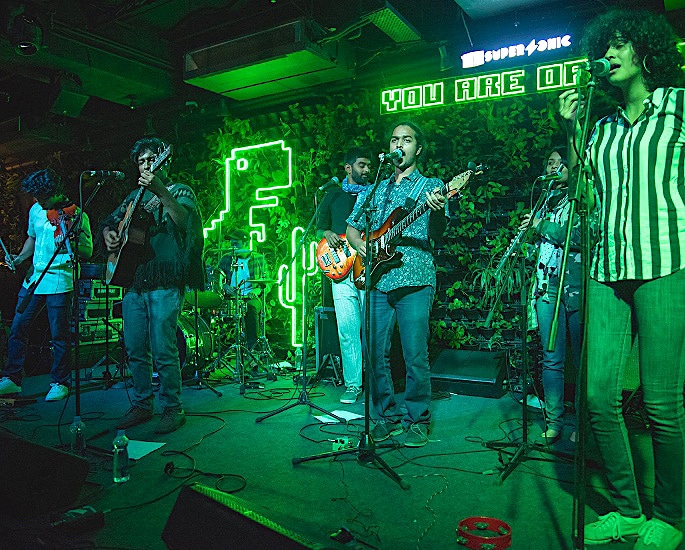 Which parts of India do you like performing most?

Performing in different cities in India is almost like travelling to different countries. This is because there is so much difference in culture, language and food and way of life.

This is what makes it fresh and fun for us while touring across the nation.

As we are based in Pune, the gigs we have in the city are almost like being surrounded by old and new friends who participate wholeheartedly. This makes our experience so much more comfortable and fun.

Playing in Chennai and Bangalore brings a great crowd of family and friends and loyal fans who deeply indulge in the show.

Performing in Delhi is fun and especially in venues like the Oddbird Theatre and The Piano Man Jazz clubs. These are some of the finest venues that strive to deliver the best quality environment for a great show.

Will you be touring the world including the UK?

With our new two-track EP, we are hoping to push our music to a larger audience, both in India as well as globally.

We have been fortunate to have performed all across India and we think now would a great time to venture out for an international tour.

Sadly this is an area we don’t really have much experience with. Having more western influences than regional, our music definitely belongs outside India, where we feel it will be appreciated more.

Our eyes are on the UK first and we’re on the hunt for a good booking agent who can help us plan a tour. We can’t wait! 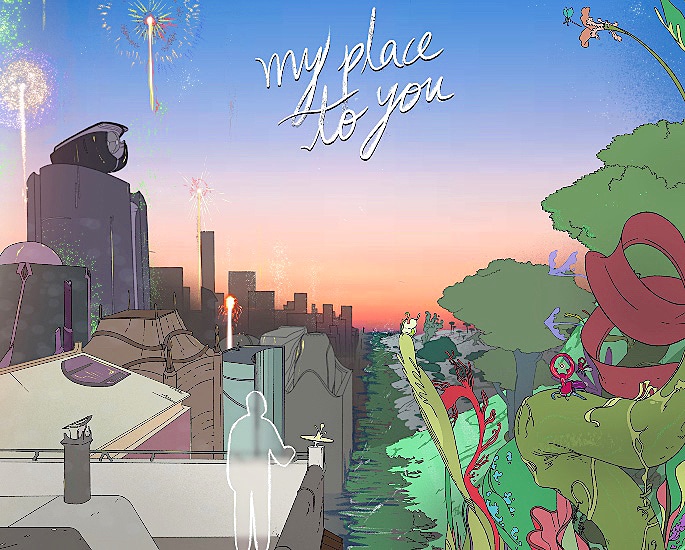 Would you collaborate with someone, if so who?

We haven’t yet collaborated with anyone yet, but in the future, definitely yes – Michael Kiwanuka, Leon Bridges and Norah Jones.

I feel like there is some soul connect with regards to the music. We get what they are trying to say and it’s genuine and simple. They are bringing back the old sound but still being relevant in the contemporary music scene.

These are qualities of a great musician. We are hugely influenced by the sound of the Norwegian band, Kings of Convenience.

It’s super minimal, melodious, catchy and the easy-going mood is just what we love about them. It would amazing to maybe one day collaborate with them, hopefully when we get to tour Norway.

Which producers would you love to work with?

It has to be legendary Indian composer and producer AR Rahman. It’s always wonderful to see what a mind like he can bring to the table.

He’s just so good with all genres and has taken the whole of Indian movie music to a different level. Hopefully, soon, fingers crossed.”

“The clarity, minimalism and the feel are commendable.” 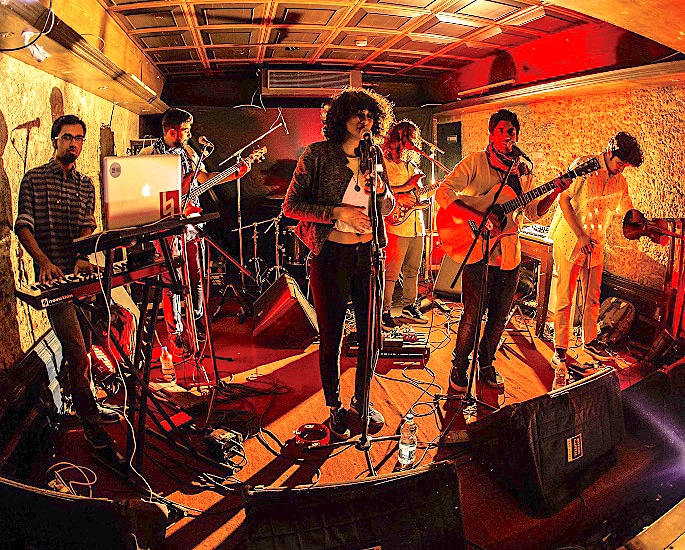 Who do you admire in the music scene?

We admire John Mayer. He is one of the few early 2000s artists that is still relevant after 2 decades. For us, he has the perfect blend between what he wishes to create artistically and compromise to make music for the masses.

Also, we admire his ability to understand his audience and his foresight on how his song will be received by his listener.

He is incredible. There are no frills in his songwriting and it’s impressive how he can condense all his ideas into a well-made and thoughtful product.

Easy Wanderlings won several awards during a successful 2017. Their accolades include bagging Beehype Magazine’s Best Album of 2017, A Humming Heart’s Most promising debut of 2017 and Rising sounds of the country- DSSC.

Gaining global recognition for their calm and collective tunes, the band have collected other awards. ‘Chill Song of the Year’ at the 2019 VIMA Music Awards is one that stands out.

My Place to You by Easy Wanderlings came out under the banner of music company CDBaby on September 27, 2019.

Fans can stream Easy Wanderlings via their SoundCloud channel here:

Faisal has creative experience in the fusion of media and communication and research which increase awareness of global issues in post-conflict, emerging and democratic societies. His life motto is: "persevere, for success is near..."
Eternal Taal Impress with Ranveer Singh for Siyaram’s Advert
Bakulaben makes Bharatanatyam Dance debut aged 75