A sensitive topic and often seen as taboo in modern day Britain, domestic violence towards men is a real issue within South Asian and non-Asian communities, DESIblitz explores.

In recent years, domestic violence against women has been a sensitive topic that has been picked up and exposed by the media in Britain and across the globe.

But to the surprise of many, domestic violence towards men is also becoming ever more common, especially within the South Asian community across the UK.

With charities such as Refuge and Women’s Aid aiming to combat domestic abuse, it would appear to be safe to say that domestic abuse against women and children is no longer such a taboo in society, and the general public tend to be more willing to fight against such forms of violence.

However, even the thought of the mere existence of domestic violence against men would appear unrealistic to many. Whether this is due to traditional mind sets or society being a victim of its own ignorance is hard to tell, but what can be said is that the increase in domestic violence towards men in recent years is worrying.

In particular, a common problem in the South Asian community is violence towards men who come from their native country, by their British Asian wives. A Pakistani man, Muhammad, who married a British Asian woman for four years, was promised by his in-laws that he could finish his degree in Pakistan before joining them in England. 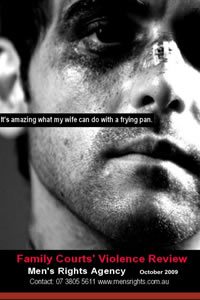 After going to England on holiday for two weeks however, his passport was confiscated by his wife’s family. His brother-in-laws threatened to harm him, and at the end of the first week he was taken by force to factories in search of work. His wife beat him and he claims that his in-laws and wife only wanted him for his money.

To think that such injustice occurs in modern day Britain is shocking, and what is even more so is the inability of revealing the truth to someone who could potentially improve the situation. Shazia Qayum of Karma Nirvana, a charity which ‘supports victims and survivors of forced marriage and honour based abuse,’ states: “Men choose to suffer in silence for the sake of respect.”

Many men feel ashamed or embarrassed to admit that they are victims of abuse, which is a mind-set that runs strong, especially within the South Asian male community, where men are expected to carry a strong, dominant role within families.

Amber from Birmingham shares her opinion on the matter: “It would probably be difficult for any man, especially South Asian men, to admit to being abused. 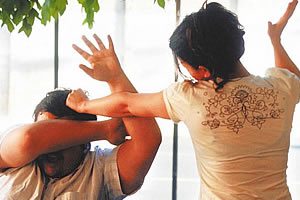 “Many men who are victims of violence would probably stay with their wife/partner for the sake of retaining family honour and their children, both of which are valued deeply within the South Asian community,” she adds.

Research would suggest that this mind-set does not only exist in South Asian communities, but in non-Asian communities as well. One such case which proves this is the experiences of Jack; who shared his story with AMIS (Abused Men in Scotland).

Speaking to AMIS, Jack stated how he is attacked by his wife, who punches and pokes him in the testicles, because of how much taller he is than his wife, he says: “Admitting to this publicly is just simply not possible.”

He mentions that he stays with his wife simply for the sake of his child, and he is expected to take the abuse, ‘like a man’.

With their slogan, ‘Domestic abuse damages men’s lives too’, AMIS stresses that not only can domestic abuse affect anyone, but that it can also exist in many forms:

“Domestic abuse is threatening, bullying, controlling or abusive behaviour between adults who are or have been intimate partners.”

Our society is such that it would appear strange to place the words ‘men’ and ‘victims’ in the same sentence. But the question which must now be posed is as to why this is?

One possible solution to this is the feminist movement. Since the 1970’s when feminism took up the cause of domestic abuse of women, campaigns, including methods of activism, led to the general acceptance that domestic violence and violence against women are no different from each other.

Although women are generally not physically violent, studies show that methods of control still exist, which may well lead to something worse. In his book, Gender Inclusive Treatment of Intimate Partner Abuse: A Comprehensive Approach (2005), John Hamel states: 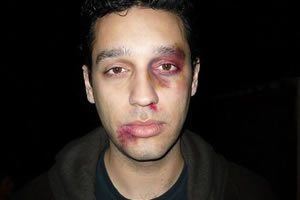 “Women are raised to avoid direct expressions of aggression. However they learn indirect methods of control, such as ostracism, gossip, and passive aggressive behaviour.

“More importantly, society grants women considerably more leeway in the expression of physical violence against intimate partners than it does men.”

One of the main questions regarding the issue remains unanswered; why does domestic violence against men occur?

Whether this is due to women believing that this violence is a means towards independence, or whether the violence is traced back to childhood trauma or abuse from a previous partner is yet to be discovered.

But what can be pointed out is the clear hypocrisy prevalent within society; unless we accept that violence can be committed by both sexes, peace and equality between the genders will remain but a dream.

If you or anyone you know is suffering from domestic violence contact Men’s Advice Line free on 0808 801 0327 Monday-Friday 9am-5pm, or email info@mensadviceline.org.uk.

Lead Journalist and Senior Writer, Arub, is a Law with Spanish graduate, She keeps herself informed about the world around her and has no fear in expressing concern in regards to controversial issues. Her motto in life is "live and let live."
Popularity of Sex Toys in India
Will Asians accept the UK Gay Marriage law?