Saboor Aly was trolled for allegedly attending a clinic for whitening treatment. The actress has now revealed the truth.

"You and Ali Ansari have had whitening injections"

Saboor Aly has revealed the truth behind her allegedly receiving whitening injections.

She and her husband Ali Ansari were subjected to trolling when a photo showed the couple at a clinic receiving drips.

The picture went viral and many suspected that it was a whitening cocktail that is used to lighten skin tone.

When Saboor Aly made an appearance on The Talk Show with Hassan Choudary, she dispelled the misconception that she had received whitening injections.

Hassan asked: “You and Ali Ansari have had whitening injections, which got misinterpreted, would you clarify that?” 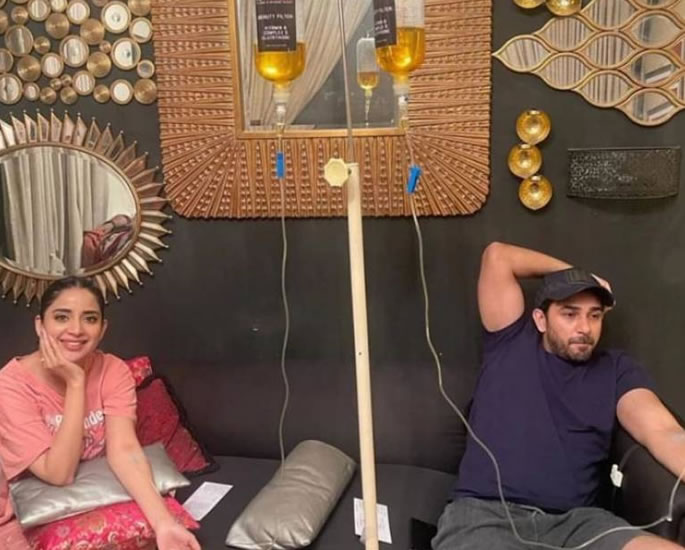 “They were just vitamins injections, we work a lot, we become tan and dehydrated and that’s why we had them.

“Had I been white, I would have been in every other drama and I would have turned all white, but it’s not like that.”

In addition, Saboor Aly noted that the practice of television directors prioritising the application of ivory foundation to all actresses to make them appear fairer is changing within the industry.

The actress claimed that although she doesn’t know if the trend has changed, she is now in a position to refuse it.

Fans in the YouTube comments of the interview appreciated Saboor’s openness and honesty.

One comment said: “Saboor is a genuine, straightforward and a talented actress who has her own identity.

“I never miss her interviews because of her honest answers.”

Another said: “She has worked her way up from the bottom and never felt overshadowed by an older sibling.

“She may be underrated but definitely has carved a niche for herself.”

In January 2022, the Pakistani television actress tied the knot with Ali Ansari.

The celebrity couple has been teasing their followers on social media with adorable photographs of their PDA and great chemistry.

Although the couple has been a social media favourite, their fans also want to see them in a project together.

While husband Ali is revelling in Bebaak‘s record-breaking glory and Saboor is enjoying the success of her most recent drama series Mushkil, fans are awaiting a project that would feature both.

The couple was asked whether they would collaborate on a project as they were on the red carpet for the Lux Style Awards 2022.

The actress claimed that despite numerous project offers, they would prefer to play happy and romantic roles together, instead of typical drama-filled plots in the industry.

Saboor Aly has a reputation for having strong beliefs and stating the truth, regardless of how unpopular it may be.

Ilsa is a digital marketeer and journalist. Her interests include politics, literature, religion and football. Her motto is “Give people their flowers whilst they’re still around to smell them.”
Pics from Hansika Motwani’s dreamy Wedding go Viral
Priyanka Chopra shares a Glimpse of Dubai Vacation