“I grew up doing a lot of impressions... So Sonny is a mash-up of certain people."

The original film was one of the surprise success stories of 2012. On a production budget of £6m, the Brit hit unexpectedly earned more than £90m worldwide at the box office, along with no shortage of critical acclaim.

Director John Madden’s most notable achievement is arguably his directing of Shakespeare in Love, which won an Oscar for Best Picture in 1998.

The original Marigold Hotel film was based on a novel by Deborah Moggach, These Foolish Things (2004). However, Moggach herself saw no need for a sequel. 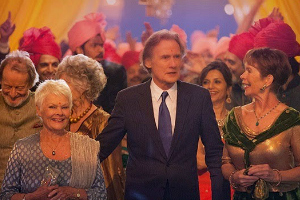 Nevertheless, Madden believes that there is still more to say about life in old age, particularly with the issues of death and mortality looming in the background.

Madden says: “The notion of mortality obviously hovers over the first film, and I felt even more strongly that it should in this one.

“The characters are facing the very real decisions and choices that confront people at this point in their lives.”

The plot of The Second Best Exotic Marigold Hotel is set eight months after the end of the first film.

Dev Patel plays the hotel manager, Sonny Kapoor, who is juggling wedding preparations for his marriage to Sunaina (Tena Desai), and trying to launch the ‘Second Best Exotic Marigold Hotel’, along with the always-witty, Muriel (Maggie Smith). 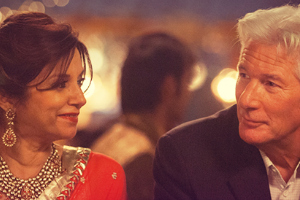 As the big day nears, the guests of the hotel find themselves swept up in the irresistible intoxication of a jovial Indian wedding.

The recently-widowed Evelyn (Judi Dench) and Douglas (Bill Nighy) venture into Jaipur, wondering where their regular breakfast dates will lead.

This situation is made more precarious when Evelyn is offered a job she cannot refuse, and when Jean (Penelope Wilson), Douglas’ estranged wife, makes an unexpected return.

Furthermore, we see the introduction of two new characters played by Tamsin Greig and Richard Gere. The latter plays the role of American writer Guy Chambers, who finds a muse in Sonny’s mother (Lilette Dubey) for his next novel.

The 24-year-old launched his career playing Anwar Kharral in the teen drama Skins. However, it was following the colossal and widely acclaimed success of Danny Boyle’s Slumdog Millionaire (2008) that he attained star-status.

As well as his appearances in the Marigold Hotel films, and in HBO’s Newsroom as Neal Sampat, he will also feature alongside Hugh Jackman in Chappie, and Nicole Kidman in Lion. 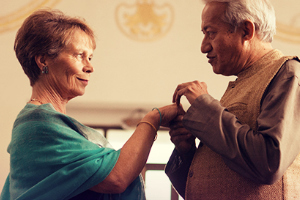 His recent breakup with his longterm girlfriend, Freida Pinto, has brought media scrutiny to his private life also.

Patel has not commented on the split, even though his ex-girlfriend has been quoted saying that she is ‘single and happy’. Incidentally, Patel was recently spotted with a mysterious brunette in LAX airport.

In The Second Best Exotic Marigold Hotel, Dev Patel plays a character that is full of life and bursts with enthusiasm. One wonders how he gets the Indian nuances so right considering he’s lived in London all of his life.

Speaking exclusively to DESIblitz, Patel said: “I grew up doing a lot of impressions of people so I was good at mimicking people. So Sonny is a mash-up of certain people I’ve met along with way.

“One uncle of mine that always gets drunk, my choreographer in this film, and a couple of other people blended in.” 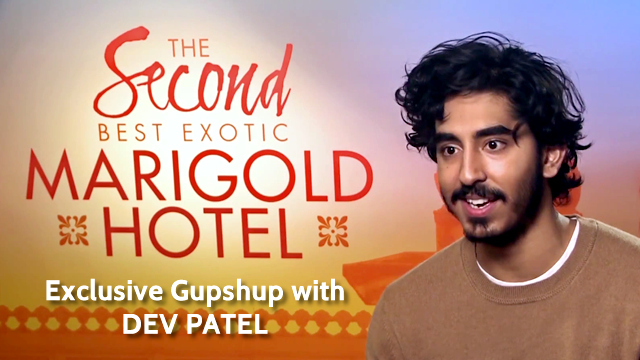 Patel told DESIblitz that he learned a great deal by being part of an all-star cast with the likes of Dench, Smith, and Nighy:

When DESIblitz asked Patel if he had any advice for young British Asians looking to get into acting, he said: “Keep doing it, man! And continue to represent!”

“It’s always nice to see Asians being pushed into things other than being a doctor or a dentist, and into the arts.” 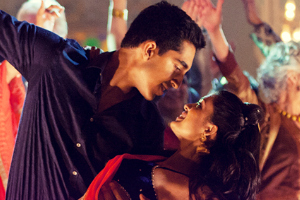 Patel does see himself as a role-model for young British Asians: “I love waving the flag on that front. I guess me sitting here is a product of success. It can happen, and there are roles, and it’s changing more and more.

“Slumdog did open a lot of doors and there are some really interesting stories to tell.”

Some critics have questioned the need for a second Marigold Hotel film. However, most are unanimous in their appreciation of the unique storyline of this feel-good rom-com series.

What critics have also found refreshing is that The Second Best Exotic Marigold Hotel portrays the lives of people from a heavily under-represented demographic.

In addition, the depth and the warmth of the characters, and the emotional engagement that the audience develop for them, is enough to carry the film through any flaws that it might otherwise have.

Those who enjoyed the first film are bound to enjoy The Second Best Exotic Marigold Hotel, which releases in cinemas from February 26, 2015.

Sonika is a full-time medical student, Bollywood enthusiast and lover of life. Her passions are dancing, travelling, radio presenting, writing, fashion and socialising! “Life isn’t measured by the number of breaths taken but by moments that take our breath away.”
Honour Killing is a British Bollywood Drama
Amitabh Bachchan summoned by US Federal Court