In an interview with Vogue India, Deepika Padukone talks about life after depression and how it felt important for her to speak on her battle with mental illness.

Back in March 2015, Deepika Padukone broke down barriers when she discussed her battle with mental illness. Now, she has opened up on how her life has changed since then in an interview with Vogue India.

The new edition is set to hit stores on 1st February 2018.

In particular, she discusses the importance of sharing her own experiences. Especially when one considers the stigmas attached to mental illness and how many can feel unable to seek support from family and friends.

“For various reasons, there’s a stigma attached to mental illness, which is why people choose not to talk about it. There were several reasons I chose to speak up.”

One such reason was on a personal level as “it transformed [her] life in many ways”. She explains:

“It was the most difficult experience I’ve been through, but it also taught me a lot about myself and about life… A large part of why I was unable to deal with it was that I wasn’t able to share it with anyone.

“If I had a fever I could tell people but with this going on inside me I would come to work not feeling great but not be able to express myself. What do I tell them?

“I tried in my own way. Sometimes I’d say I’m not feeling good… A large part of it for me was my own experience.”

Her words will resonate with many who too have faced harrowing experiences with mental illness. When Deepika recovered from her battle, she recalls:

In March 2015, she opened up about her mental illness, which had begun around early 2014. She explained how she hid her battle from her family until she broke down in front of her mother. After councilling and medication, the actress felt she had recovered.

Deepika adds how life has changed for the better since then, saying:

“Today I know that wherever I might go in the world people might look at me as someone who has experienced depression. I feel liberated and free. I don’t feel caged anymore or like I’m hiding something.”

The starlet also graces the cover of the February 2018 edition of Vogue India. Posing with a beautiful smile, she injects positivity into the cover by wearing a sparkling, rainbow-coloured shirt. 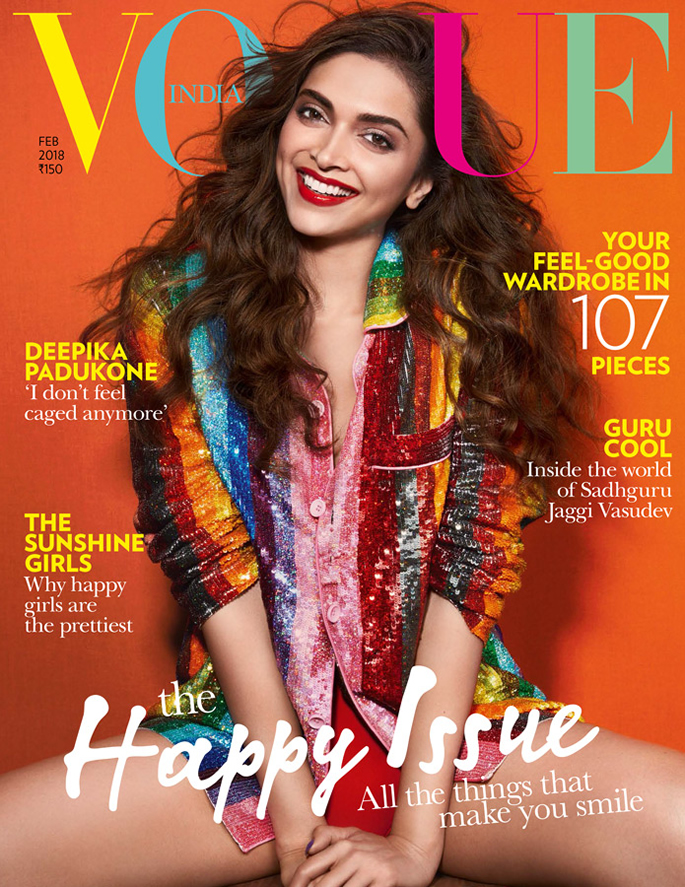 The star also reflects on how she feels she has a “pre-depression life and post-depression life”. In particular, she explains how she now handles social media negativity:

“I’ve never been someone who has reacted to tabloid gossip, negativity or the constant media glare.

“But what my depression has made me better at is what I choose to do with that information. The way I look at it, it’s okay for people to think the way they do, to have the opinions they have.”

With charm and beauty radiating through her words and the magazine cover, one can see how Deepika does truly feel liberated. She continues to hail as an inspirational figure, not just for speaking on mental illness, but how recovery is possible.

Make sure you pick up the new edition of Vogue India on 1st February 2018. Read more of her interview here.