700,000 migrants coming to the UK could be missing out on learning English. It has found that funding for English lessons has been cut steadily between 2008 and 2013 by the UK government.

At the last census 850,000 migrants said they could not speak English well.

A report published by a British leading cross-party think tank called Demos has found that 700,000 migrants to the UK could be left unable to speak English after government funding cuts to English for Speakers of Other Languages (ESOL).

At the last census there were 850,000 migrants who said that they could not speak fluent English, or not speak the language at all.

Yet there are currently 150,000 people registered to receive English Language teaching under the ESOL scheme provided by the government, so the lessons cannot have been successful.

The ESOL provision has been for many years in the remit of the Department for Business, Innovation and Skills.

This centralised system is different from those in place in both Scotland and Wales, who have devolved local strategies to ensure that as many migrants as possible can speak English.

Demos obtained statistics under the Freedom of Information Act that show the government has decreased throughout the past 5 years from £212 million during 2008-9 to £128 million in 2012-13. 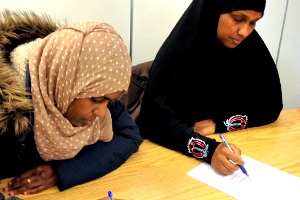 This report advises a rethink of the ESOL policy and a renewed emphasis on teaching migrants to speak fluent English, rather than more funding cuts.

Also criticised is ESOL scheme’s structure, saying: “Current ESOL policy suffers from fragmentation, lack of clarity about the aims and intended outcomes of learning, and the tendency to take a short-term view.”

“It is not just individuals who stand to gain; unlocking migrants’ potential will result in widespread and long-term benefits to society as a whole.”

Demos argue that improved English tuition could actually lead to the UK having a bilingual workforce within its economy, making the country stronger in an international business market.

The researcher at Demos who is the author of this report stated: “It is essential that we get as many newcomers as possible using English with confidence. Currently around 700,000 people are left in limbo and it is unlikely their English will improve without sustained learning.” 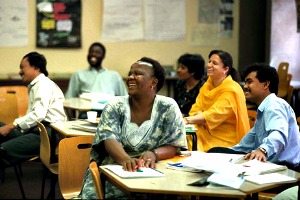 He agreed with Demos that there needs to be a national overhaul of the ESOL system to make it easier for people to learn English in an effective way.

He said: “You can’t just have a one-size-fits-all approach to ESOL provision. We need a national strategy that incorporates realistic goals linked to levels everybody understands.

“It also needs to cover the varying needs of different groups of migrants whether they are coming to study, work or to join a family.”

English language teaching will only become a bigger and bigger issue in the next few years, the think tank argues.

It is predicted that the ethnic minority population of Britain will rise to between 25 per cent and 43 per cent by the year 2056.

With this in mind, it is vital that the government allow migrants to integrate successfully into the country, and become a part of the UK economy.

The recommendations from the Demos report could offer a way forward. They propose setting up an ESOL umbrella body which would support local authorities and allow them to share teaching strategies, whilst the actual lessons would be overseen locally.

Clearly there is a long way to go in terms of providing effective teaching of English to the UK’s migrant community.

However, it is hoped that the ideas in the Demos report will provide a starting point for discussion and some new strategies to tackle this problem.

Eleanor is an English undergraduate, who enjoys reading, writing and anything media related. Aside from journalism, she is also passionate about music and believes in the motto: “When you love what you do, you’ll never work another day in your life.”
Scotland used by Gangs for Trafficking Slaves
5 Inspiring Asian TED Talks