The Brit Asia TV Music Awards 2010 ceremony was held in Birmingham on 2nd May 2010 giving a boost to the British Asian and International music scene. Awards were given to popular names like Jay Sean, Jaz Dhami and Miss Pooja on the night.

Brit Asia TV celebrated British Asian music with its awards at Symphony Hall in Birmingham, UK, on 2nd May 2010. A star studded night with many big names especially from the Bhangra music industry were present at the show. The night of the awards was hosted by comedian and actor, Hardeep Singh Kholi.

Performances by the old-school acts of Bhangra for many stole the show. Including appearances on stage by Balwinder Safri, Azaad, Apna Sangeet and Heera to name a few. The major new name that won the hearts of many screaming girls was of course, Jaz Dhami, the sensational new artist with noticeable vocal ability. And of course, heart-throb H Dhami had female audiences raising up to his appearance on stage.

Brit Asia TV was launched in April 2008 with the aim to produce and air shows to promote British Asian culture and entertainment. The awards ceremony is part of that programme. Brit Asia TV on Sky Channel 833 is the only entertainment television channel targeting all generations of Asians within the UK and Europe. The awards will be broadcasted on the channel in the near future.

“It is important that we recognise the hard work from all of the artists across the British Asian music scene fairly.” 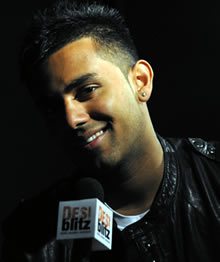 The voting for the Brit Asia TV music awards was conducted by a public vote via the awards website and text voting. Determined to make the voting as fair as possible, Sheila said, “We achieved this perfectly by the open public web vote where the winners were chosen by the public. Web votes were collected, verified and counted by an independent adjudicator via www.britasiamusicawards.com. Having spoken to the artists it was this feature of our award ceremony that made the difference.”

Here is the final list of the winners of the Brit Asia TV Music Awards 2010:

Jas likes to keep in touch with the world of music and entertainment by writing about it. He does like hitting the gym too. His motto is 'The difference between the impossible and the possible lies in a person's determination.'
Jaz Dhami Wallpapers
Miss Pooja is Panjaban in the movie