Kashmir has been receiving good response from the Bollywood filmmakers

They will conclude the trip by exploring the beautiful locations at Pahalgam on Saturday, January 30, 2021, before departing back to Mumbai.

Interactive sessions with media, travel trade associations, Valley’s film, and line producers are on their to-do-list.

“The top production houses are here and have visited various locations.

“Kashmir has been receiving good response from the Bollywood filmmakers since the opening of the tourism here in addition to the country’s regional entertainment houses for shooting song sequences and commercial ads.”

He also praised Jammu and Kashmir for its natural beauty and breathtaking landscapes, considering it the best location for filmmakers to shoot their movies.

In addition, the tourism department has been making it easy for them to get relevant permissions for shooting.

This affluence will help boost tourism in Jammu and Kashmir, which faced Rs 2,615 crore revenue loss and around 65,000 job losses since the removal of special status in August 2019.

Fortunately, due to the heavy snowfall, the Union Territory has attracted an increasing number of tourists.

Television Producers Guild of India Ltd. praised the pristine beauty of Gulmarg and expressed a keen desire to shoot for their upcoming film projects at various locations in Kashmir.

The cafe has opened its doors in the Kolahoi Ski Resort in Gulmarg, and its pictures are going viral on social media. 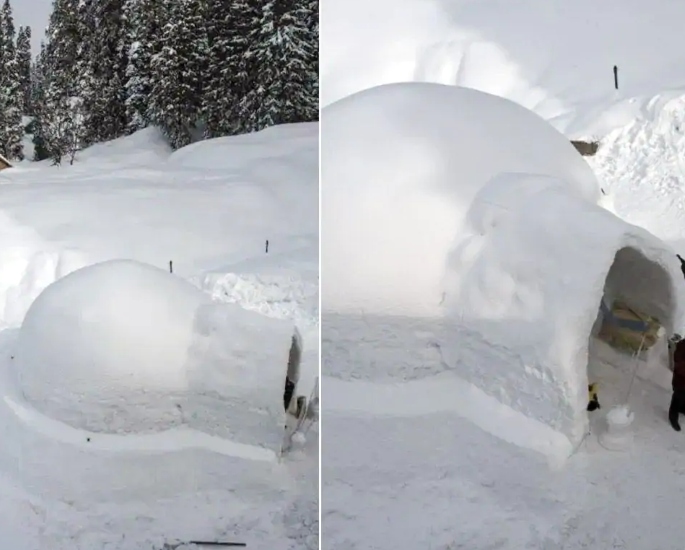 Igloo Cafe has a height of 15 feet and a circumference of 26 feet, with tables and benches made out of snow.

The igloo can seat 16 people on four tables which have been built towards the wall of the igloo, and a master centre-piece has been built in the middle of the cafe – also out of snow.

Netizens have also been asking about the temperature inside the igloo as they would be sitting in a room made of snow.

However, because ice is a great insulator, a thick-walled igloo can make the atmosphere inside warmer than the outside, so nothing to worry about.

So, why not getting your bags ready for Gulmarg?