It’s a joy-filled event, the guests are presented with a banquet like food

Like the rest of South Asia, there are some uncanny similarities in Bengali weddings but at the same time so many differences that you may not have heard of.

Often different villages and districts have their own customs and traditions which they integrate into the wedding.

While most weddings are loud, full of life and colour; some villages prefer a simple and quiet day to celebrate such a precious moment.

DESIblitz presents all you need to know about a traditional Bangladeshi wedding ceremony. 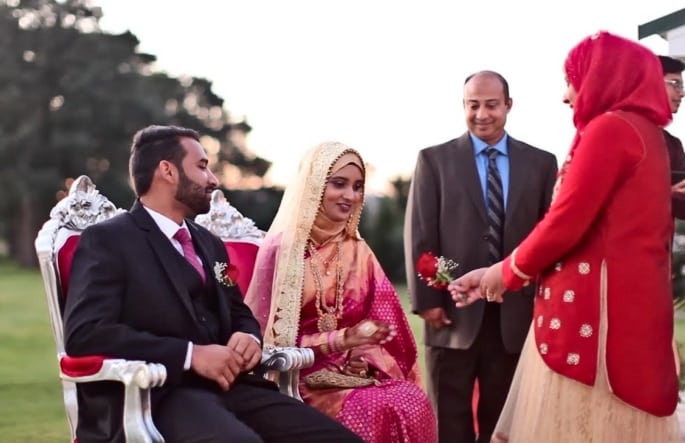 Many Bengali weddings are arranged; this is the process of how the bride and groom choose a partner from individuals they are introduced to by family or friends. The early stages involve wedding CVs and photographs of their suitors from which each bride and groom decide on who they would like to meet.

After meeting a few suitors, they finally find their one true love whom they get to know and after a month or two a date is set for the first event.

The sini-paan marks the engagement of the two lovestruck couples. Sini-paan translates to sugar and paan (betel leaves); in some cases, members of the groom’s family bring a paan taal. The event is hosted by the bride’s parents; some prefer a venue and others keep it simple and celebrate it at home.

On the day, the bride adorns herself with a saree and jewellery gifted to her by her husband to be. In some sini-paans, the bride and groom sit side by side and talk a little, not to mention the cake fights.

In others, the bride and groom sit apart from each other and while the event is spectacular; elders prefer to keep the day conservative.

Aside from all the celebrating, the bride’s father and groom’s father come to an agreement on what will be given to the bride in terms of dowry, gold and when the wedding should take place. 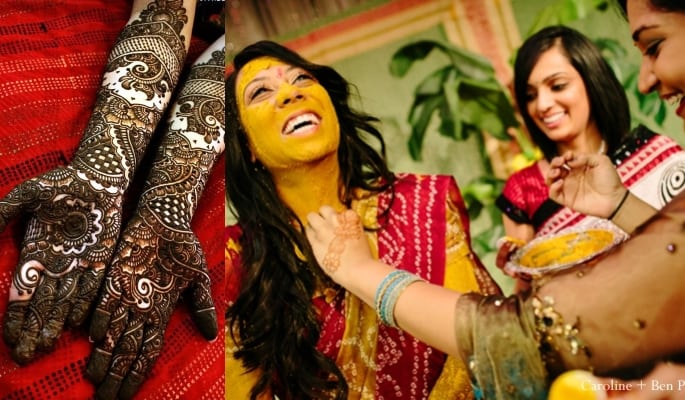 Prepare yourself, this a traditional Bangladeshi way of throwing a bridal shower and it is one of the most colourful of events. Gaye holud translates to ‘yellow on body’ and is usually celebrated by the bride’s family but some grooms also have their own gaye holud too.

This event takes place two-three days before the actual wedding party, often aunties like to sing the traditional gaye holud songs and everyone comes dressed in really bright colours like yellow and orange sarees. It is also where the bride has her mehndi done, with both hands decorated in beautiful patterns.

The gaye holud preparations include making a turmeric paste, mixing turmeric and water; this is done an hour before the event starts which for most brides is at night. In this time, the bride dresses up in a yellow jamdani saree.

When the bride is ready, she sits surrounded by women and girls; each take turns to add some holud (turmeric) on either cheek of the bride. After, the mehndi artist decorates both of her hands; many Bengalis believe, the brightness of the mehndi stain indicates a happy and prosperous marriage.

Of course, like all Desi events, it does not end without a feast and platefuls of mitay; the menu includes curry, biryani and lentils. Now lentils may not give off a party dish vibe, but it is popular with the guests as it compliments the meat and chicken dishes. 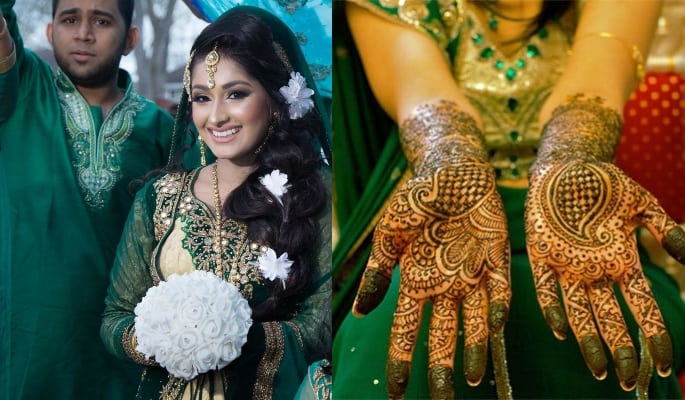 Some brides prefer to skip the gaye holud and have a simple mehndi here in the UK; this is becoming the norm and follows in a similar manner to a gaye holud. Often the bride/groom and the guests wear green and red clothing but others go for more brighter colours.

It’s a joy-filled event, the guests are presented with a banquet like food with dishes like biryani, meat curry, chicken tikka and lots of mitay (mishti). This event takes place at home, wedding venue or a private suite in a restaurant.

While the guests are enjoying their food, mehndi leaves are crushed to create a thick paste; this organic paste becomes vibrant and redder in colour when it sets.

In some mehndis the bride is taken to a stage where she will have her mehndi done, parents hire cinematography to capture one of the last days before their daughter will officially be married. Children and young girls tend to dance for the bride, you can always catch an aunty or two trying to make wedding jokes.

The feast is similar to a gaye holud, some families like to spend more and provide a wedding like a banquet; it is all based on preference. 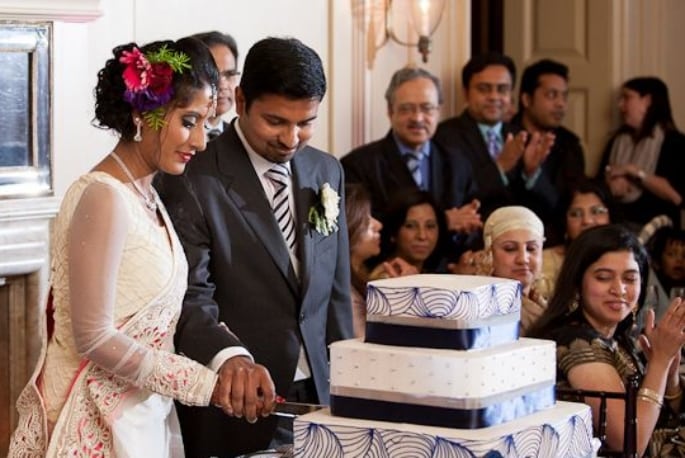 In modern day, doing the biya and walima together is favoured by both bride and groom. The biya has always been hosted by the bride’s family and the walima by the groom’s family; in most Bengali districts, in joint events, the groom contributes to 1/3 of the cost.

However, more and more couples are open to halving all costs as the price of a Bangladeshi wedding has increased over the years; we estimated a low budget wedding to cost around £12,000.

Also, sharing all costs allows the two individuals to make some good investments such as a flat or have a  spectacular event with VIP style functions and features.

“What I love about Bengali weddings is not only the food but actually the family members you see. Everyone is busy doing their own thing so it is difficult to meet up with family members altogether but at the wedding, you can always be sure your gusti will be there.”

During the event, brides dress in sarees or lehenga and the colours red/maroon with cream is quite popular but it is not compulsory. There is no limit to what a bride can wear, some even go for sparkling outfits from other cultures and as always, each and every bride looks like a princess.

Brides like to accessorise with gold jewellery or special bridal jewellery which matches the colour code of their glamorous attire. Followed by high heels, bouquets or clutches.

Grooms wear the traditional sherwani, some prefer a western style suit and tie. Those who wear the sherwani, accessorise with a turban and sometimes wear a heavy scarf which falls over their shoulder. Although becoming more uncommon, grooms use to carry a handkerchief with which they would cover the mouth; this was a symbol of shyness.

On to the venue, before the groom can enter the venue, he is often stopped by the bride’s siblings and demanded to pay a fee to get in. This is just some harmless fun, some grooms hand out a good sum of money and others pull out a few coins.

After the meal, the newlyweds cut the cake, take lots of pictures and then leave together and make their way to their new home. It’s very normal for the two to stay at the groom’s parents home for a few months but more and more individuals now live in their own accommodation. 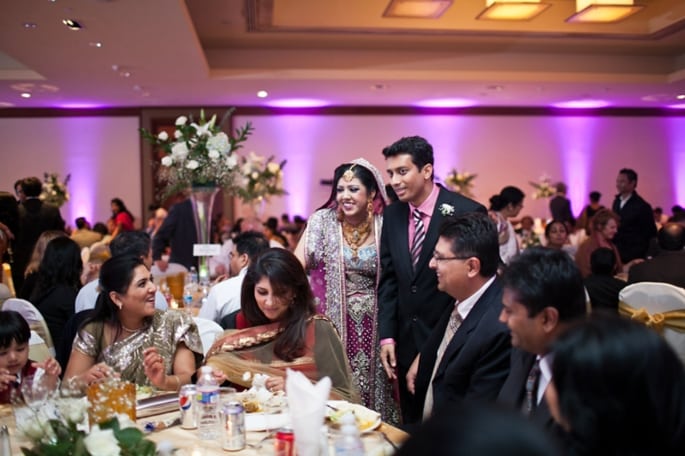 We know, after three whole mega parties it is still not over! Talk about parting hard; the ‘feera khawa’ marks the final official wedding-related event. The words ‘feera’ and ‘khawa’ originates from the Sylheti dialect ‘return’ and ‘eating’ and the translation almost defines the event.

The event is about the bride returning with her now husband and members of his family to feast but there is a twist. While in the previous events the bride is the one who is showered with gifts, this time the bride’s family gift the members of the groom’s family with gifts like sarees or money.

So what happens in a feera khawa? Just lots of food presented in a glamorous dinner party with about 100 guests and the groom gets to stay over at his in-law’s house for the first time.

Bangladeshi weddings like other Desi weddings follow a complex process which is packed with partying hard and having all the fun in the world. That doesn’t stop creative young couples from adding their own little twists which often astonishes guests of all ages.

Yet the main purpose remains that the two, bride and groom are ready to welcome a new step in their life with happiness and joy. Family and friends are always on standby and ready to help brings these precious events to life.

We hope you enjoyed our guide through a traditional Bangladeshi wedding ceremony, maybe you’re getting married and have found interesting ideas that you can mix in with your wedding.