"15 years on, we are still discovering the unsung Asian heroes of communities across the entire country.”

In an evening dedicated to the extraordinary talents of Asian women across the UK, the Asian Women of Achievement Awards (AWA) for 2014 saw female glamour grace the Hilton Park Lane on June 4, 2014.

Founded by Pinky Lilani OBE, in association with Caspian Media and RBS, AWA 2014 celebrated 15 years of female empowerment and success in a diverse range of specialisms.

Including business and entrepreneurship, media, sport, the arts, as well as social care and humanitarian work.

The shortlist for 2014 saw a wealth of key female figures who have reached the top of their field, showcasing some of the incredible female talent that is sometimes hidden away in the Asian community. 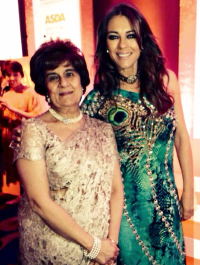 “The quality of this year’s shortlist is a fitting complement to such a milestone year in the Asian Women of Achievement award’s history.

“I am incredibly pleased to know that, 15 years on, we are still discovering the unsung Asian heroes of communities across the entire country.”

Hosted by BBC’s Riz Lateef, the ceremony was graced by notable women in the British spotlight, including Dame Kelly Holmes, Elizabeth Hurley and patron of AWA, Cherie Blair (HRH Princess Badiya of Jordan is also a patron).

Winners of the night included Shehneela Ahmed, who is the first Asian Female Football Manager in Britain and the world. Tweeting at her win, Shehneela said:

“The tears of happiness I won amazing feeling Im top of the world thanx to everyones support #AWA2014.”

Valerie Dias took the Finance Award on the night. Dias is Chief Officer for Risk at Visa Europe. She was astonished at been recognised, admitting:

“I was a reluctant participant when my team put me forward – I didn’t think I was worthy.” 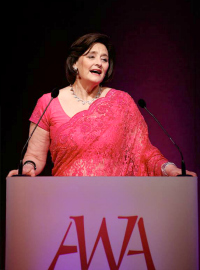 Liz Hurley also presented the Entrepreneur of the Year award to a well deserving Shazia Saleem who is the founder of ieat foods.

Of the prestigious awards given out, The RBS Chairman’s Award was a special accolade gifted to one outstanding female who best represented the core values that AWA stood for.

For 2014, the award was presented to Geeta Nargund, a senior gynaecologist and consultant from St George’s Hospital, London.

“I am astounded by their passion, courage and strength, and I am proud to know that these awards can provide the platform they need to expand their networks further and encourage other young Asian females to follow in their footsteps.”

Here is a full list of winners of the Asian Women of Achievement Awards 2014:

It is clear that Asian women in Britain have much to be proud of, particularly when it comes to achieving success in so many fields and professions that are dominated by men.

As AWA patron, Cherie Blair who is a strong supporter of female achievement and empowerment, particularly within minority communities, said:

“The job is far from done, which is why the AWA programme continues to thrive and remains so important.

“Too many women’s talents go unrealised in Britain today, yet we would all benefit as a nation if they could be unleashed.

“So let’s all get behind our Asian Women of Achievement and give them another 15 years of support.”

Many Asian women are now carrying the mantle for female achievement and empowerment, and we look forward to see even more women join the ranks of these outstanding individuals in the future.