Anushka Sharma has finally signed her first film opposite Salman Khan, making her one of the few actresses to team up with the three Khans of Bollywood, Shahrukh, Aamir and Salman.

"We have shortlisted few names and Anushka Sharma is in the wish list."

After a very long time coming, Anushka Sharma has finally signed up to Salman Khan’s next film, which is to be directed by Sooraj Barjatya.

The lucky leading lady will finally have all three Khan’s ticked off from her bucket list, a rarity for any budding actress, and something which only Kareena Kapoor has managed so far.

Anushka who started her acting career in 2008 has had a whirlwind of success and recognition for her acting talents, evident in some of the high-profile films that she has starred in.

Interestingly, Anushka initially dreamed to be a successful model, and acting was not something she was too interested in. No doubt Bollywood is pretty grateful that this young star changed her mind.

Anushka first made what has been considered to be a dream debut with Rab Ne Bana Di Jodi (2008) opposite Shahrukh Khan, which propelled her to success. She was critically praised for her character portrayal, as well as her ability to effortlessly act alongside King Khan. 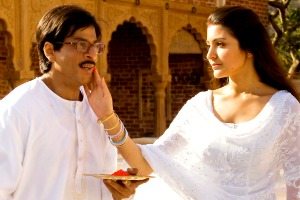 Her next few films included Badmaash Company (2010) with Shahid Kapoor, Band Baaja Baaraat (2010) with Ranveer Singh, and Patiala House (2011) with Akshay Kumar. She is also set to star in Bombay Velvet with Ranbir Kapoor in 2014, following her current shooting of P.K. with Aamir Khan.

It was rumoured that Anushka would initially star in Salman’s Kick, as well as the upcoming sequel to No Entry. But reports suggested that her loyalty to Shahrukh led her not to pursue them.

Anushka’s most recent film was Jab Tak Hain Jaan (2012), again with Shahrukh, where she played a bubbly and enthusiastic would-be journalist. She won the Filmfare Award for Best Supporting Actress for this role.

It is thought that with Salman’s schedule freeing up after Kick, and his brother Sohail Khan’s film, Mental, this new film will start shooting in June 2014, with a release date expected in time for Diwali 2015.

Anushka as Salman’s new heroine, has been until now a closely guarded secret, with the leading lady being considered alongside a number of other actresses. Earlier in June, a spokesperson for Sooraj’s production said: 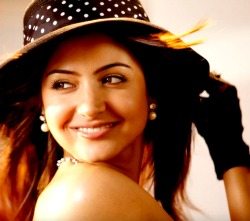 “We have shortlisted few names and Anushka Sharma is in the wish list. But it’s too early to comment anything as the film will go on the floors in 2014. Besides Anushka, even Sonakshi Sinha is being contemplated for the role.”

But Sooraj eventually approached Anushka for the part, and the 25 year old happily agreed.

Director Sooraj is making a comeback with this new venture, after almost eight years away from the industry.

As a result, expectations for the film are extremely high, with audiences eager to see what the movie will entail.

Salman has Sooraj to thank for his fame. He first worked with the director on Maine Pyar Kiye (1989), which made Salman an overnight superstar. Later they worked together on the other classic, Hum Aapke Hain Kaun (1994). Their last film together was Hum Saath Saath Hain (1999), another blockbuster hit, almost 14 years ago.

Salman’s movie success over the last few years has been pretty incredible, with each of them raking in over Rs.100 crores at the Box Office. With this superstar the most bankable actor in Bollywood today, every actress, whether old or new, wants to act alongside him.

Even while filming Ladies vs. Ricky Bahl, Anushka said:

“I am a huge fan of Salman and would love to work with him. He has a different energy all together and he is a good human being too.”

But while Salman’s bankability is not an concern, his recent trial over his alleged involvement in the 2002 homicide is. The incident which took place over ten years ago has accused Salman of driving into a group of homeless people.

One man was killed while three others were injured. The charge could see the superstar face up to 10 years in jail, if found guilty.

The as yet untitled film will be made under Rajshri Productions and filming is set to take place in Gujarat and Rajasthan.

Currently Anushka is working with Aamir Khan on P.K., where recent reports have seen her strike up a keen friendship with co-star Sushant Singh Rajput after some initial coldness, while on a 10 day shoot in Belgium:

“Initially there were some differences between them. When Anushka signed P.K. certain quotes were attributed to her (about the length of Sushant’s role) which upset him. He too, in turn, said things which hurt the actress,” said one source.

“But seeing the two actors in Belgium, sharing jokes and fooling around on the sets like two longtime buddies, it was clear that they have put that episode behind them. They always pulled each other’s leg, had lunch together and seemed like any two youngsters just having a good time at work,” they added.

It is clear that with so many future films on the horizon, Bollywood’s latest acting star in town, Anushka Sharma, has an exciting few years ahead of her.

Aisha an English literature graduate, is a keen editorial writer. She adores reading, theatre, and anything arts related. She is a creative soul and is always reinventing herself. Her motto is: “Life is too short, so eat dessert first!”
Raanjhanaa ~ Review
Neeru Bajwa ~ From Canada to Punjab