It seems as though film director Anurag Kashyap and Anil Kapoor have become embroiled in a back-and-forth exchange on Twitter.

It appeared as though Anurag Kashyap got into a Twitter spat with actor Anil Kapoor.

The exchange supposedly started after Anil congratulated Shefali Shah for Delhi Crime‘s win at the Emmys.

This resulted in Anurag throwing a jibe at the veteran actor, asking where his Oscar is. What followed was a back-and-forth exchange between the pair.

Anil had written: “I’ve said it once and I’ll say it again because they absolutely deserve it!

“Congratulations to the Delhi Crime team! Nice to finally see more of our people get international recognition. Shefali Shah, welcome to Hollywood.”

I've said it once and I'll say it again because they absolutely deserve it! Congratulations to the #DelhiCrime team! Nice to finally see more of our people get international recognition. @ShefaliShah_ #WelcomeToHollywood

Anurag then asked Anil where his Oscar was for Slumdog Millionaire.

This apparently added fuel to the fire, with Anil saying:

“The closest you have come to an Oscar is watching Slumdog Millionaire win Oscars on TV.”

When it came to casting for Slumdog Millionaire, it was revealed that Shah Rukh Khan was the first choice to play the host before it eventually went to Anil Kapoor.

Anurag Kashyap decided to use that to throw another jibe at Anil.

He said: “Says the k-k-k-ing of hand-me-down films. Weren’t you the second choice for this film also?”

They continued their Twitter exchange. Anil also reminded the filmmaker that he has been in the industry for 40 years, to which Anurag said that retirement was calling.

However, the Twitter exchange was not all as it seems as it was later revealed to be a promotional campaign for their upcoming Netflix film AK vs AK, which is directed by Vikramaditya Motwane.

In the film, Anurag and Anil are pitted against one another.

Anurag plays a disgraced filmmaker who kidnaps the daughter of an actor, played by Anil, and films the search for her in real-time.

Watch the Trailer for AK vs AK 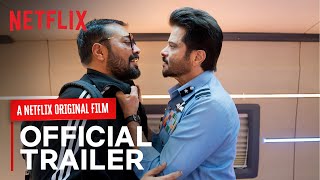 While it was a unique promotional campaign for their film, not everyone seemed to like it.

Actor and comedian Suresh Menon criticised the fake Twitter war between the pair. He wrote on Twitter:

“The fake Anil Kapoor vs Anurag Kashyap Twitter war just shows to what extent people can go for publicity.”

The fake Anil kapoor vs Anurag kashyap twitter war, just shows to what extent people can go for #publicity…… the truth is good content doesn't need such publicity … #undekhi #Scam1992

Netizens seemed to agree with Suresh. One person said:

“Bhai more power to you to speak up openly. I’m sure Bollywood gang will not like this at all.”

Another user said: “Absolutely Suresh! Bollywood is acting really desperate in the recent times to gain publicity, after the kind of reception they’ve been getting post-June.

“But how would they any know better? For all their lives they’ve been in that bubble and taken the audience for granted.”

Dhiren is a journalism graduate with a passion for gaming, watching films and sports. He also enjoys cooking from time to time. His motto is to “Live life one day at a time.”
Diljit Dosanjh donates Rs.1 cr to keep Farmers Warm?
Swara Bhasker Talks about the Rise of Female-Forward Roles