The turban and the beard are the most powerful symbols of the identity of a Sikh man. The Singh Project Exhibition is a celebration of that identity in a fashionable and stylish way. DESIblitz reports.

"Previous generations may even have had to cut off their beard to fit in."

Music photographer duo, Amit and Naroop, are used to working with the likes of Jay Sean, 50 Cent, and Tinie Tempah. Their latest exhibition however lauds Punjabi culture, with a photographic collection entitled ‘The Singh Project’.

Their camera lenses have been capturing the images of Sikh men who sport beards and turbans. While this outer appearance is what unites them, each of them could not be any more different.

They each have their own unique stories and personalities, and each of them also adapts and interprets Sikh traditions in their own way.

The aim of The Singh Project is to capture the essence of modern Sikh culture and to pay tribute to the beauty and variety of British Sikh men. 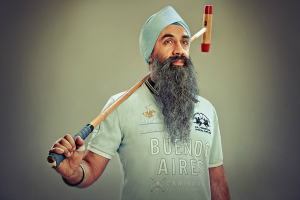 Amit and Naroop have chosen a diverse array of Sikh men as subjects in the project, by using men of different ages, different profiles, different expressions and different attire.

There was a wide range of professions from a fashion blogger to a magician to a boxer, as well as doctors, IT consultants, entrepreneurs, and well-known personalities.

This personal project meant a great deal to the pair of photographers: “Being Sikhs ourselves, we feel a sense of pride and the identities of the people in the portraits reinforced our beliefs in our religion.”

“We wanted to show that Sikh men are breaking barriers and that the beard is not holding them back.” 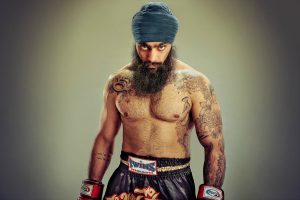 Historically, Sikhs were persecuted because of the turban and unshorn hair, but today these are symbols of revolution, non-conformity and style.

As a true grassroots community project, the pair say that they enjoyed the challenge of engaging with each and every person, as they were all so different. They also feel rewarded that everyone involved expressed their joy at being a part of this project.

Beards and top buns have become popular in mainstream culture and particularly amongst a sub-section of hipsters based in Shoreditch and the East End of London. This sparked Amit’s and Naroop’s fascination with the beard and turban look.

What they found it interesting is that both hipsters and Sikhs maintain beards to assert a unique identity and to stand out from the crowd.

Sikh fashion models have helped to normalise the image of a man in a beard and turban. For instance, jewellery designer Waris Ahluwalia starred in TV adverts for GAP in the United States.

Then, the 23-year-old fashion blogger, Pardeep Bahra, followed in his footsteps, as the centre of an advertising campaign for the new Samsung Galaxy, on this side of the Atlantic.

He appeared in TV adverts, billboards, and on the front cover of the Metro, with the steel of his bracelet matching the metallic border of the Galaxy handset.

The award-winning founder of Singh Street Style, which now has 35,000 followers, can now add his modelling for the Singh Project to his portfolio. 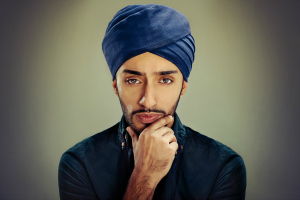 Another sign of the Sikh breakthrough into the fashionable mainstream was the location of the Singh Project Exhibition. The Gallery that all have thronged to is not in the outer suburbs of Southall or Ilford.

The locale for this trend-setting display is in the nooks and crannies of Fitzrovia; which in a bygone era was the centre of Bohemian artistic and creative life in Victorian London.

With Bloomsbury to the East, Soho to the South, and Oxford Street a short walk away – this is the heart of London.

The way that the funds were raised adds another compelling chapter to this tale. The pair turned to crowd-funding, launching their campaign on Kickstarter.com; where they declared their intentions to raise £7,000 in 30 days. By the end of the month, 179 backers, many from the USA and Canada, had generously donated £10,075!

Amit and Naroop dedicated the 35 portrait exhibition, The Singh Project, in honour of their grandfather, Mr Jivan Singh Jhooti.

Sonika is a full-time medical student, Bollywood enthusiast and lover of life. Her passions are dancing, travelling, radio presenting, writing, fashion and socialising! “Life isn’t measured by the number of breaths taken but by moments that take our breath away.”
Undress Your Mind at London Sex Exhibition
Gandhi Statue in final stages at Parliament Square