The Nose Ring ~ Past to Present

The Nose Ring is a very popular form of jewellery and it’s an item that has found its way to the fashion world through a very interesting historical past. We look at how it has made its way from the Mughal era to a statement of fashion today.

In India, there are numerous names for nose jewellery

The nose stud or ring does have an association with the Hindu religion but it is also worn by women from other faiths too, including, Muslim, Sikh and Christian.

In India, there are numerous names for nose jewellery. The most common ones are Nathni, Koka, and Laung. There are also two different types of nose piercings, which are the Phul and Nath. Opposed to a stud otherwise known as a Phul, the Nath can be quite large, often covering a part of the mouth or being tied by a chain to the earlobe. The Nath is most commonly worn during wedding ceremonies.

Jewellery for the nose come in a variety of shapes ranging from tiny jewelled studs resting on the curve of the nostril, to large gold hoops that encircle the cheek with graceful pendant pearls dangling just above the upper lip.

Many women prefer to have their left nostril pierced instead of their right. The reason for that is because that spot is associated in Indian Medicine, otherwise known as Ayuvedra. When the nose ring is pierced there, it helps female reproductive organs, and is supposed to make childbirth easier.

Back in the day, an Indian nose piercing was a symbol of virginity, known to many oriental countries such as India and Persia. 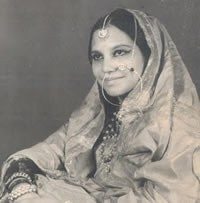 After the night of a bride’s wedding, the bride would remove her ‘koka’ and replace it with a diamond or gold nose stud, which would then be worn for the rest of her married life.

In some countries wearing a gold or diamond nose stud was forbidden by the government’s rules and regulations, if a woman were seen wearing one they could have been severely punished.

In South India, especially in Tamil Nadu and in parts of Andhra Pradesh and Karnataka, the nose stud known as ‘mookkutthi’ is widely worn compared to the nose ring, by both married and unmarried young women.

Nose piercing was discovered in the late 1960’s by the hippies. After making a trip to India, they had been fascinated by the koka and adopted it in the late 1970’s during the ‘Punk Movement.’ After being adopted by the hippies, the nose ring was then a symbol of rebellion against conservative values.

However, due to the acceptance of nose rings in the 1990’s as a fashion accessory, they are now considered to be a touch of style instead of a “rebellious act.” Over the decades many young and old have undertaken getting their nose pierced. Another reason why nose piercing is so common, is because it is a painless procedure. They are now popular in many parts of the world including the UK and other parts of Europe, USA, Canada and Australia. 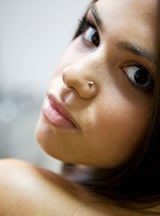 Some people have experienced opposition to wearing a nose stud or ring in work and education establishments. In 2005, Sunali Pillay, a school girl of Indian origin in South Africa, took her case to the Durban Equality Court against the Durban Girls High School for not allowing her to wear a nose ring in accordance with her religious beliefs; in 2007, a Hindu woman, Amrit Lalji aged 40, was fired for wearing a stud in her nose whilst working at Heathrow airport in the UK, and in 2008, Shannon Connolly, aged 13, had to fight her case against her school to wear a nose stud on Hindu religious grounds.

Thus, today there are a variety of different types of nose rings available for people to wear. Though the traditional importance of the nose ring has not been forgotten, it has been making waves in contemporary trends and has become a fashion accessory for lots of women and some men too!

Check out our gallery of the different types of nose rings.

Neha Lobana is a young aspiring journalist in Canada. Besides reading and writing she enjoys spending time with her family and friends. Her motto is "Live as if your were to die tomorrow. Learn as if you were to live forever."
Prasad Bidapa the Fashion Guru
Fashion Design as a Career