Amir Khan surprisingly revealed in an interview that he wouldn’t want to see his son in the boxing ring and “take a punch”.

Amir Khan has astonishingly confessed that he wouldn’t let his son into the boxing ring because of how hard the sport is.

Amir and his wife Faryal’s son, Muhammad Zaviyar Khan, was born in 2020.

But, speaking to the YouTube channel iFL TV, ‘King Khan’ revealed the gruelling sacrifices people have to make when they pursue boxing.

He stated that he missed a lot of his youth to becoming a world champion and wouldn’t let his son follow in the same footsteps.

Amir was in attendance of Adam Azim and Dylan Cheema’s contests in the BOXXER Fight Night event, held in Coventry’s SkyDome.

After speaking about their terrific performances, the interviewer asked:

“You’ve got a young little beautiful boy, is he going to be carrying on the legacy? Yes or no? What would his mum say?”

Amir Khan humorously replied: “The mum would kill me if I said he was fighting”.

However, Amir did admit how powerful his son is – would that be the tipping point for the former olympian? He revealed:

“You know what? He’s strong. One thing about me, you’ll probably see, when I meet someone, I like to kind of just [touch and feel them out].

“Even with all my opponents…and I’ve done it to my son and I’m like bloody hell, he’s strong.

“But you know what, I don’t think I’ll ever let him fight. I want to put him in education and school.

“I don’t want him to bloody take a punch, he doesn’t need to, his dad took all the punches.”

Amir Khan went on to discuss the hard work ethic and determination a person has to possess to make it as a boxing professional:

“Making weight is hard, waking up in the morning, 6 or 7 o’clock in the morning to go for a run, being away from your friends, your family.

Whilst time will only tell if Muhammed will step into the ring to emulate his dad’s stunning career, Amir hinted at some potential comebacks.

He reported that he has had some calls to fight legends Floyd Mayweather and Manny Pacquiao in exhibition matches. Although he shrugged it off as nonsense. 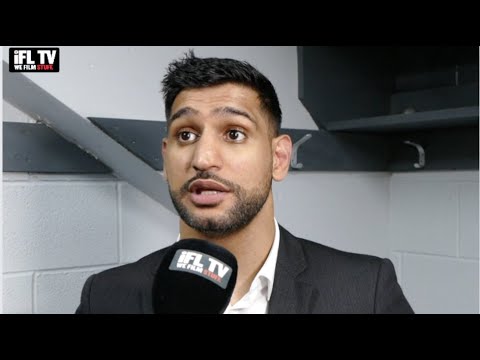