Amir Khan made his comeback with a bang to the ring after two years. He destroyed Canadian Phil Lo Greco within the first minute of the boxing match.

The boxing match was incredibly over in just over 40 seconds.

Boxer Amir Khan faced Canadian Italian Phil Lo Greco at the Echo Arena in Liverpool on April 21, 2018, and won the match within less than a minute of the first round.

Canadian Phil Lo Greco was first floored by Khan after an upper-cut hit and straight jab sending him onto the canvas within about 15 seconds.

After getting up with a smile, Lo Greco was encountered by Amir Khan’s prowess and surge to win. He punched and hit Lo Greco with body shots sending him onto the canvas and towards the ropes. At which point the referee called the match in favour of Khan.

The boxing match was incredibly over in just over 40 seconds.

The fight was in the Welterweight division.

The first fifteen seconds saw Khan literally take the fight straight into his own hands and didn’t give Phil Lo Greco really a chance.

When the former WBC Welterweight champion Lo Greco was up after the first time before the referee’s count, Khan assured the Canadian had no comeback by then battering him with punches and blows which resulted in Khan’s victory.

This was the first boxing match of Khan’s three-fight deal with Matchroom and Eddie Hearn. 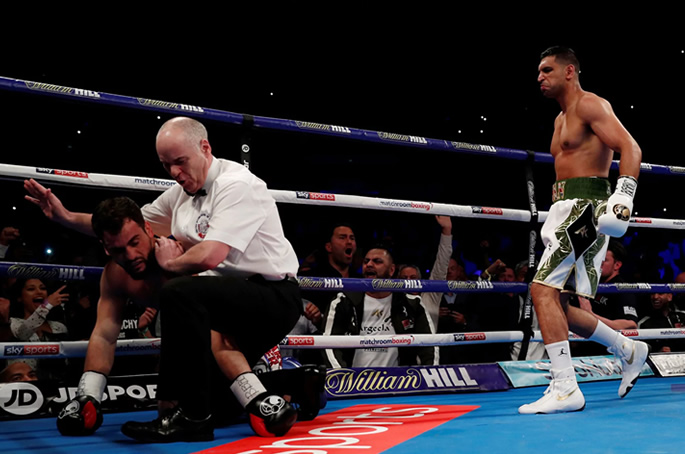 Amir Khan came back into the ring after major personal issues with his wife Faryal Makhdoom, a trip to the Aussie jungle for I’m a Celebrity and recent hand surgery which required rehabilitation.

Watch the clip of his win:

Amir Khan said after his win:

“I want to say a big thank you to Liverpool. I mean, I’ve been out the ring for two years. I’ve never taken a day off from the gym. I wanted to prove a point.”

“The change of trainer…I had to make some changes. Phil Lo Greco is a dangerous opponent. I just want to say – we had that little bit of argument but I put that behind me.

“I came here to do a job, do a clinical job and box well.

“I want to thank all the fans for turning out and enjoying my victory. Khan’s back.” 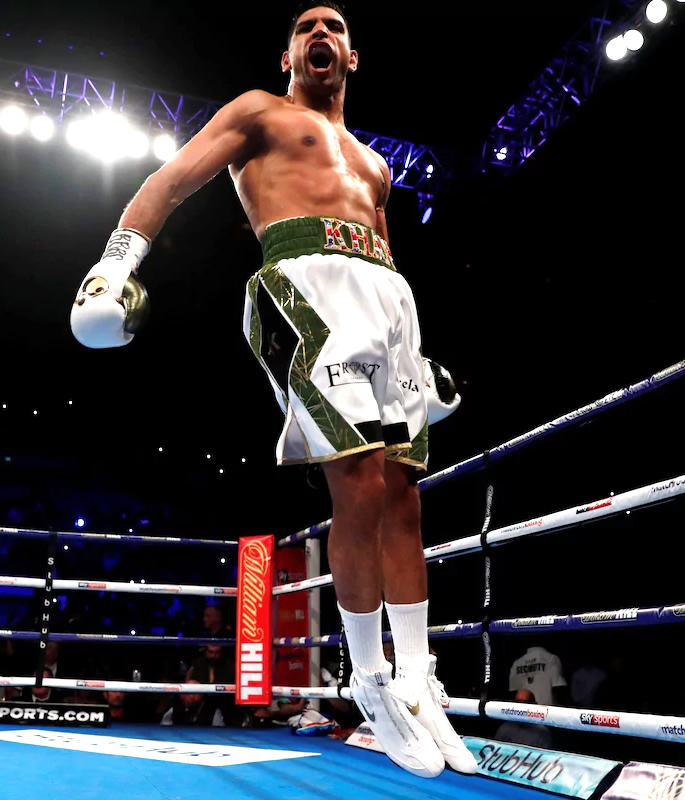 Khan’s last fight in May 2016 was against the then WBC middleweight champion Saul “Canelo” Alvarez who in the sixth round knocked out Khan cold.

For Amir Khan’s next boxing match there are a number of options from matches against Kell Brook, Manny Pacquiao, Lucas Matthysse, Danny Garcia, Lamont Peterson,
Adrien Broner or Jessie Vargas.

Fans will want him to take on the former IBF welterweight champion Kell Brook.

After the win, Khan went onto say in the ring on the microphone with Kell Brook present:

“Kell Brook has been living off my name for a long time.”

“But Kell listen mate. We’re here in the ring now and guess what, the world knows. Who’s going to win the fight if me and Kell Brook fight? [Crowd shouts and chants ‘Khan’]”

“And guess what mate. You got a long way to go.”

“If the fans want the fight..”

“I’m not the fighter to run. Kell I came to Eddie [Hearn] and signed a deal with your promotional company. Eddie Hearn’s Matchroom company.”

“I got closer to you. So, I’m chasing you. Remember that!”

Khan then went to the other side of the ring as the chants and whistles filled the air of the Echo Arena.

“He doesn’t want the fight. He just run off. Amir! Amir!”

Kell was asked if he could make welterweight. He said that it remains to be seen and said:

“He’s been out for two years. He’s struggled to make welterweight so why not make it a catchweight.”

The exchange of words definitely sounded as if it could be the next fight. But it remains to be seen if Eddie Hearn, Amir’s team and Kell’s team see this as Khan’s next contest in the ring.

For now, Amir Khan has claimed one remarkable and very quick win, out of the three he has signed for.