It was quick work for Adam Azim as the prospect won the youth title after spectacularly defeating his opponent in just over a minute.

"I want so many other titles."

Adam Azim made a statement as he emphatically won by TKO in just over one minute.

The boxing prospect was the main event in the BOXXER Fight Night event, held in Coventry’s SkyDome.

He was up against Belgium’s Anthony Loffet, who brought an 8-1 record into the fight.

Meanwhile, Azim was looking to take his record to 5-0 with a fourth successive knockout.

Although it was his first scheduled 10-round fight, the 20-year-old from Slough showed no nerves.

The excitement among the crowd went up a level as Azim made his way to the ring.

His last fight did not last a round and his bout against Loffet ended up being the same.

Azim’s onslaught began after just 30 seconds. He showed the right hand before firing a big left uppercut which hurt the Belgian.

Azim lived up to his ‘Assassin’ nickname, stepping in with two right hooks to send his opponent to the canvas.

Loffet was still hurt as he gingerly got back up.

Azim resumed his attack with spectacular speed. He blasted Loffet with repeated right hooks, shaking him, hurting him.

The towel soon flew in from Loffet’s corner and when the referee saw it he ended the bout after just 66 seconds.

FIRST ROUND DEMOLITION FROM AZIM! ? pic.twitter.com/a0X5FgaAVE

After the fight, he said: “I feel great.

“I wanted to take him out. This means everything to me. This is the first of many.

“I’m so focused. This is just the first of many. I want so many other titles. I’m going to grab them with both hands.”

His promoter Ben Shalom was impressed by Azim’s performance, saying:

“I know Shane is struggling to find sparring partners. We’re going to struggle to find his next opponents.

“He is the future of British boxing.” 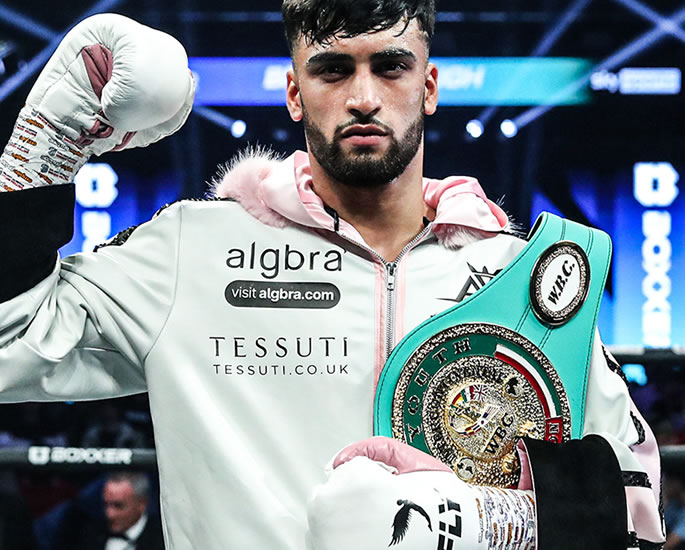 Amir Khan was in Coventry working as an analyst for the event and after Azim’s fight, he said:

“I think in a couple of years’ time he could be one of the youngest world champions coming out of Britain.

Khan later suggested another prospect to take on Azim in a domestic showdown.

“You need to find [Azim’s] next opponent.

“Who are you going to find for him? That’s the hard thing because he’s knocking everyone out. He’s blasting everyone that gets put in front of him.

“Maybe the Cheema fight is a good one for him. I think that would be a massive one.

“He’s sparring against the top guys like Conor Benn, Joe Cordina, he’s done well against them I hear. He’s very special. He will go far.”

Adam Azim responded: “I would love that fight.

“I love that fight. If Cheema wants it, he can have it, it’s up to him. I know that he wants to go his own road.

“Well done to him but I would love that fight obviously, I don’t mind Cheema.”

Dhiren is a journalism graduate with a passion for gaming, watching films and sports. He also enjoys cooking from time to time. His motto is to “Live life one day at a time.”
Dylan Cheema wins Thrilling Fight by Decision
Amir Khan says New Asian Boxers need to ‘Stay Grounded’