Amir Khan hits back at Racism

Amir Khan has the potential to make it as a world class British boxer. But his success in Great Britain he feels is tainted by some fans not fully accepting him due to his skin colour and religious background.

"They have to accept that I’m British"

Amir Khan is one of the most prize boxers emerging out of the UK today. This British born young man from Bolton, Lancashire, of Pakistani origin, has proved himself many times in the ring to date. With his latest fight against Dmitriy Salita at the Metro Radio Arena in Newcastle ending in just a record 76 seconds, Amir Khan is progressing towards becoming a world class fighter.

However, amongst all the success, there is one thing that overshadows this exciting and very jubilant fighter, and that is – racism.  Amir Khan has come across it in recent fights and has been taken back by racist abuse directed towards him by a small minority of boxing fans.

Amir has reacted to the unsavoury reception of these so called fans and said, “It’s probably jealousy, and sometimes skin colour does make a difference.” And then added,

“I know if I was a white English fighter I would be a superstar in Britain and the world.”

Therefore, despite the efforts of this ambitious sportsman proving that he can be one of the top British boxers of his class in the world, there are still people in his own country that do not accept him due to his skin colour and religious background.

Being Muslim as well, Amir feels that anti-Muslim racists are trying to turn fight fans against him. But he knows he is on a mission to succeed in his career and has learnt to develop a thick skin against the remarks. “I never get [face-to-face] racial remarks but it’s always out there, which you can’t stop. You just live and learn with what people are like. I just choose to ignore them and carry on with my career,” he said. 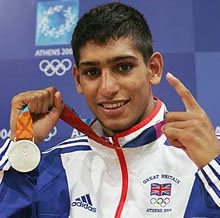 After his first noticeable win of a Silver medal for Great Britain at the 2004 Olympics in Athens, Amir’s success started to gain momentum and subsequent fights heralded him as a rising boxing star and building him a huge fan base in the UK. But after one fight which he lost against Breidis Prescott, fans quickly turned on him. Especially, those that saw his skin colour as the easy target.

Talking about that time, Amir said, “Straight after the Breidis Prescott fight, when people said, ‘He’s finished’, there were racial remarks made.” But he saw this as a positive despite the negativity and adds, “But it made me stronger. It made me come back stronger and made me a better fighter.”

There is no doubt Khan is a proud boxer and he has shown this in his fights and ability. At the same time he has not shied away from showing he is a solid British born fighter, wearing Union Jack colours in the ring. In addition, he has also promoted his roots by having Pakistani flags and colours surrounding him too. Something never seen before in a boxing ring in the UK. 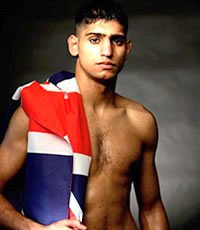 Amir has no doubts about his status as a British Asian icon but knows that it is a struggle to be fully accepted and on this controversial point he said, “I am proud to be British, and it’s a very small minority who say that. But it does hurt you and it pushes you all the way. I went to the Olympic Games and won a medal for Britain and then won a world title for Britain, but sometimes you don’t see the appreciation.”

Typical racially motivated lack of appreciation has been showed by people like Nick Griffin, the leader of the British National Party, who has stated that people like boxing star like Amir Khan should be encouraged to leave Britain, and dismissed claims that Britain would lose talent and said, “Perhaps we will lose one good boxer, but there are more important things.”

However, Khan has a mindset that is clear about who and what he represents and said, “They have to accept that I’m British. I went to the Olympic Games for Britain. I could have chosen to go for Pakistan if we were all like that. I’m a Muslim but I respect other religions and other cultures.” 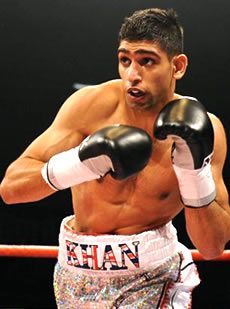 Amir retains his WBA World Light-Welterweight title and is next destined for fights in the USA. And interestingly, he has noticed a difference in cultural attitudes between the UK and USA. He said, “I’ve only been in America for a year and maybe I haven’t seen the reality, but there does seem to be a culture which is more into celebrating success. That’s the difference between America and here.” Which indicates that acceptance of him as a successful fighter and individual is of prominence despite his skin colour or background in the USA.

His coach Freddie Roach feels that Khan has definitely got what it takes to succeed in the boxing world. Roach said, “I think he’s about halfway there. He’s a world champion which is a great feat in itself but I think he has a bright future and can be a multi-champion in a lot of different weight divisions.”

Is this an example of the reality of the struggle of many British Asians in the UK to be accepted? Does it mean that the colour of your skin will always be the inhibitor to acknowledgement and success in the UK? Do you think racism of this kind exists a lot more than it is seen or heard? Has Amir Khan got the right attitude?

Baldev enjoys sports, reading and meeting people of interest. In between his social life he loves to write. He quotes Groucho Marx - "The two most engaging powers of an author are to make new things familiar, and familiar things new."
Kickboxing – a Way of Life
IPL 2010 features no Pakistanis