Amir Khan has spent £2,000 getting his £160,000 Porsche waterproofed, despite the vehicle being in Dubai where the weather is mostly dry.

“Wow, it just pours right off.”

Amir Khan has spent £2,000 waterproofing a Porsche he drives in the dry Dubai desert.

The boxer announced he had purchased a £160,000 Porsche 911 Turbo in April 2021 after revealing he had bought a holiday home in Dubai.

Despite the city only seeing four inches of rain annually, Amir was taking no chances when it came to the supercar.

Amir has now had the car wrapped in a coating that repels water.

The former world champion took to Instagram to share a video of a garage worker demonstrating how water repels off the luxury motor.

As the worker does so, an astonished Amir says:

“Wow, it just pours right off.”

The luxury Porsche is just one car in Amir’s extensive collection.

Most of Amir Khan’s vehicles are at his home in Bolton, which sees 10 times more rain than in Dubai.

In 2020, it was reported that Amir was looking to add a Rolls-Royce Cullinan to his collection. The lavish SUV has a starting price of £264,000. 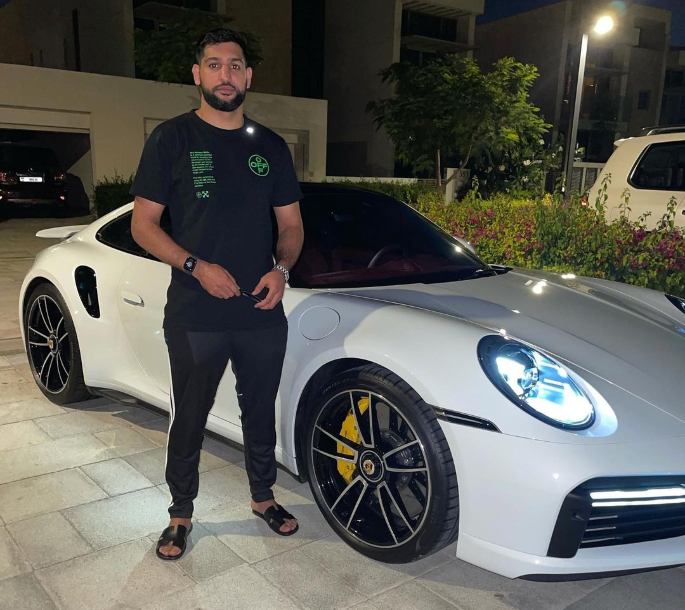 Amir Khan was recently the star of his own BBC reality show, Meet The Khans: Big in Bolton.

The series followed the boxer’s home life with his wife Faryal Makhdoom and their three children.

Episodes saw the couple discuss their marriage, go to prestigious events and even get into arguments over trivial matters.

The couple were often seen in Dubai, with a few episodes showing Amir and Faryal searching for and eventually purchasing the holiday home.

The purchase is partly due to Amir’s role as the WBC Middle East Boxing Council president.

Amir Khan has not boxed since July 2019 but he remains in talks with promoter Eddie Hearn for another fight as he enters the final stages of his illustrious career.

He is open to a long-awaited grudge match with rival Kell Brook.

Amir has also been subject to several callouts from rising star Conor Benn.

After a stunning victory over Samuel Vargas, Conor Benn called out Amir, saying:

“I like Amir Khan, he has achieved everything I want to in this sport.

“But he said I would have a tough night against Samuel Vargas, just because he did.

“But I am a different animal when I get in there. When I see an opening I take it and that is exactly what I would do to Khan.”

Amir fired back at the undefeated fighter, suggesting that a fight would only make sense if a world title was on the line.

Amir wrote on Twitter: “Conor, well done. Great kid, wish him the best. At his age, I was a world champ.

“Maybe if he had some belts that fight would make sense, but he’s got a long way to go yet.”

Dhiren is a journalism graduate with a passion for gaming, watching films and sports. He also enjoys cooking from time to time. His motto is to “Live life one day at a time.”
Brothers jailed for Filming & Sexually Abusing Young Girls
Domestic Abuse rises among LGBTQ Pakistanis amid Covid-19