Abortion Levels in Pakistan are One of the World’s Highest

A study by the Population Council has highlighted Pakistan as having one of the highest rates of abortion globally, We look at the reasons for the findings.

"Like contraception isn't something we are made to think of."

A study conducted by a New York-based Population Council has noted, that Pakistan has one of the world’s highest levels of abortion.

This study occurred as part of a nonprofit organisation that advocates family planning and as such they did a deep dive to investigate the global levels of abortion.

Women in Pakistan aged between 15-44 years old were recorded to have 50 abortions per 1000 women, this was one of the highest rates recorded in the world.

The research conducted highlights that many of these women are older, poorer and less educated married women; who are unaware of family planning methods and contraception.

Many of the women already have children and are often hospitalised after having self-induced a miscarriage.

Abortion is legal in Pakistan but only under ‘severe circumstances’, such as it being injurious to the mother’s health to carry the child.

Hence, a likely reason why so many Pakistani women are self-inducing miscarriages. They are aware that once they reach this state, medical facilitators will have little option other than to fully abort the child.

Contraception and Lack of Sexual Education 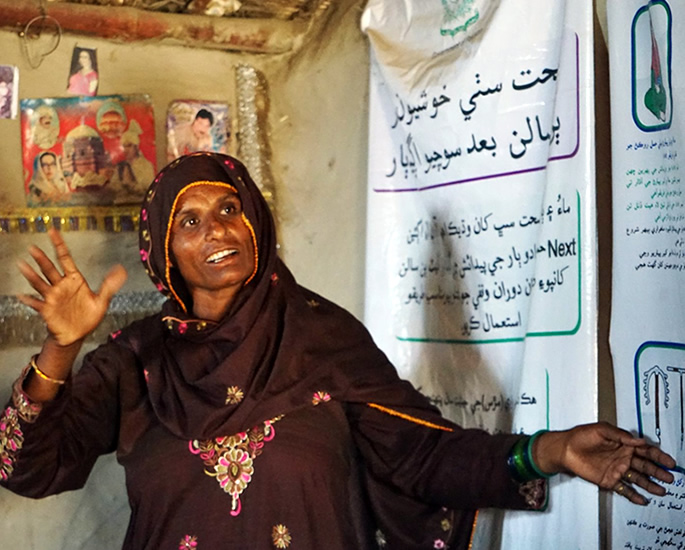 In an article written by NPR, they highlighted that many of the women who were getting abortions were married, older, and illiterate women.

The issue that persists in much of South Asia, and in particular, Pakistan; is that there is a lack of sexual health education and poor availability of contraception in rural areas.

Contraception and some basic sex education in rural areas are promoted by women who travel around like ‘Avon ladies’ doing poster-based presentations to try and get the message through to illiterate women.

Afreen, a Pakistani woman who lives in the UK, raises issues regarding sex education in Pakistan. She says:

“It’s not like we don’t know about the idea of sex, we do. Just nobody explains the biology of it, nobody talks about consent, pleasure or how to be safe.

“Like contraception isn’t something we are made to think of.

“We are raised in a culture where you get married and have lots of kids.”

“It’s worse for the poor girls who don’t get an education, I have a wealthy family, they paid for me to study in the UK and now I have a job here.

“But for them, they get married young and aren’t exposed to any type of society or materials which would alert them to the pill or condoms.

“The man will just have sex with her and if she falls pregnant she has to deal with it, then they’re 11 to 12 kids deep and she is the one suffering in it all.”

For many of these impoverished and uneducated women, they cannot bear the financial burden of multiple children.

A large contributing factor to Pakistan’s high abortion rates is the fact that contraception and sexual education are not subjects that the population are educated on.

The moral stigma and taboo surrounding sex are so high, that women are having to encourage their own miscarriages, in order to abort unexpected or unwanted pregnancies. 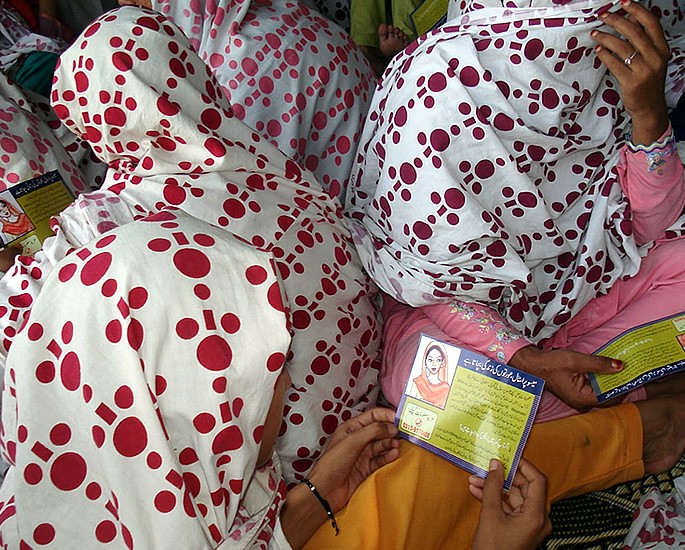 It is illegal in Pakistan to abort a child as a result of socio-economic strains.

However, for the more impoverished members of Pakistani society, this is a legitimate concern and burden.

As such, many women attempt to induce their own miscarriages.

For women to be granted access to an abortion in Pakistan, the conditions surrounding the pregnancy must be severe.

There needs to be a threat to the mother’s health which would require medical intervention, to stop the pregnancy being carried to full-term.

Due to which, many women will often lift heavy objects, hoping to cause harm to the foetus.

Another method women adopt is to concoct herbal brews which are known in villages to bring on a miscarriage.

One such brew is a drink made up of boiled dates which is meant to harm the foetus.

These women take very extreme actions to harm their foetus and themselves, as they are unable to actually cope with the reality of the pregnancy.

Many midwives in Pakistan have highlighted to NPR, that they only abort the foetuses of women, who are already on their way to miscarry a child.

This dangerous practice of encouraging miscarriages to allow for an abortion creates enormous risks for the health of these women.

The people conducting these abortions often are not medically certified, researchers estimate about a third of all women who undertake abortions in Pakistan are subjected to suffering from health problems.

These range from heavy bleeding, a perforated uterus, and deadly infections; all of which are a result of poor and unsafe abortion practices.

With the rates of abortion being so concerningly high in Pakistan, there clearly needs to be more done in terms of family planning, abortion laws and sex education. 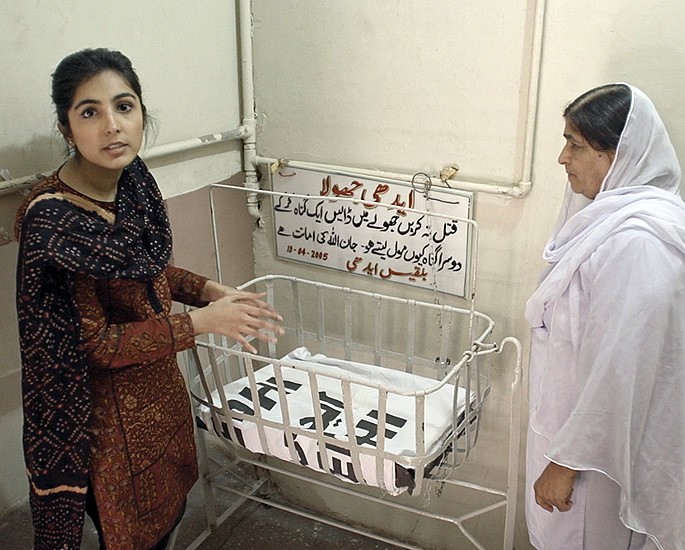 According to documentary filmmaker Maheed Sadiq, who made the film, Discarded Daughters, aborting female babies is also a major issue in Pakistan like other South Asian countries India.

In her film, she explores how many girl babies are killed after birth too, saying:

“In Pakistan alone, hundreds of babies are killed every year simply for being girls.

“They are found in garbage dumps or thrown off bridges, strangled, burnt, suffocated, starved, stoned, some with their umbilical cord still intact – many of these incidents go unreported.”

Thus, indicating that sex-selective abortions are also practised in Pakistan, especially in rural regions. The pressure of sexual preferences for male children plays a major role.

Thus, if Pakistani women are aware or suspect that they are expecting a female foetus, they will often induce an abortion due to gendered pressures.

During making her film, Sadiq was shocked with “the social stigma and abuse Pakistani women faced when they discovered they were having a daughter”

In a study between 2011-2014 called Sex-selective Abortion in Rural Pakistan research found that 20.9% of 4,620 Pakistani women had sex-selective abortions.

34.9% of these women said the reason for aborting their child was the presence of a female foetus.

Some of the women had used ultrasonography to confirm the sex of the child.

These kinds of abortions are also performed by ‘back-alley abortion providers’, where a woman will want the abortion due to seeing the female child as an economic burden – when it comes to marriage and dowry.

Therefore, concluding that sex-selection also contributed to the rates of abortion in Pakistan. 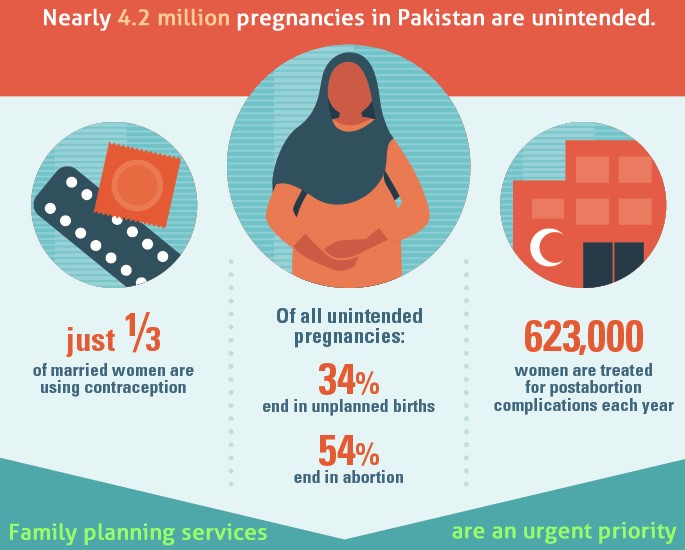 Things do not seem to be improving when comparing the new study by the Population Council to reports in the past too.

A study conducted in 2002 of women who had abortions across three of Pakistan’s four provinces revealed reasons for their abortions.

54% of the women in the study said they could not afford to have another child, and 25% said that it was “too soon” to have had another child (women were allowed to give more than one answer).

A Department of Health survey in Pakistan in 2006-2007 found that only about 30% of married women used contraception.

In addition, more than one-quarter of the women who used contraception also relied on risky methods such as withdrawal or periodic abstinence. Leaving them open to unwanted pregnancies.

To assist with the issue for future generations, a programme called ‘Youth Friendly Spaces’ organised by the (International Planned Parenthood Federation (IPPF) has been launched in Pakistan, to support younger women.

The programme is fully supported by the Rahnuma Family Planning Association of Pakistan (R-FPAP). An organisation which has extensive experience of working with and reaching out to young people to increase their access to safe abortion and SRH education and services.

R-FPAP has set-up YFS within 17 of its health facilities to help young Pakistani women which are run by trained youth volunteers.

However, much more is needed. The main issue with this topic is that is largely still seen as taboo and inappropriate but the population needs more education on sex, sexual health and contraception, especially in the rural areas.

Improved methods in tackling the issues surrounding unwanted pregnancy and unsafe abortions within Pakistan, could definitely help reduce the rate of abortions in the country, and more importantly, help the women.

Jasneet Kaur Bagri - Jas is a Social Policy graduate. She loves to read, write and travel; gathering as much insight into the world and how it works. Her motto derives from her favourite philosopher Auguste Comte, "Ideas govern the world, or throw it into chaos."
Sex Before Marriage: A Real Pakistani Woman’s Experience
10 Very Odd Reasons for Indian Divorce