Yoga has become one of the favourite pastimes in Bollywood. We take a look at seven stars who love yoga, showing off incredible poses.

Karan, in particular, shows off his strength by easily holding Bipasha on his back.

Yoga has become a favourite pastime by the stars of Bollywood. When they’re not busy filming or touring, many celebrities now love doing the ancient Indian practice as a hobby.

It’s easy to see why. With an aim of obtaining the ideal balance of body and mind, it can improve both fitness and flexibility.

While it has withstood the test of time, the practice grows even more popular thanks to Bollywood.

Stars such as Shilpa Shetty Kundra and Kareena Kapoor Khan have built the Indian practice into their daily workout sessions.

As it offers an alternative way to build fitness instead of working a sweat at the gym, its influence has grown worldwide.

Let’s take a look at some of the stars in yoga action! 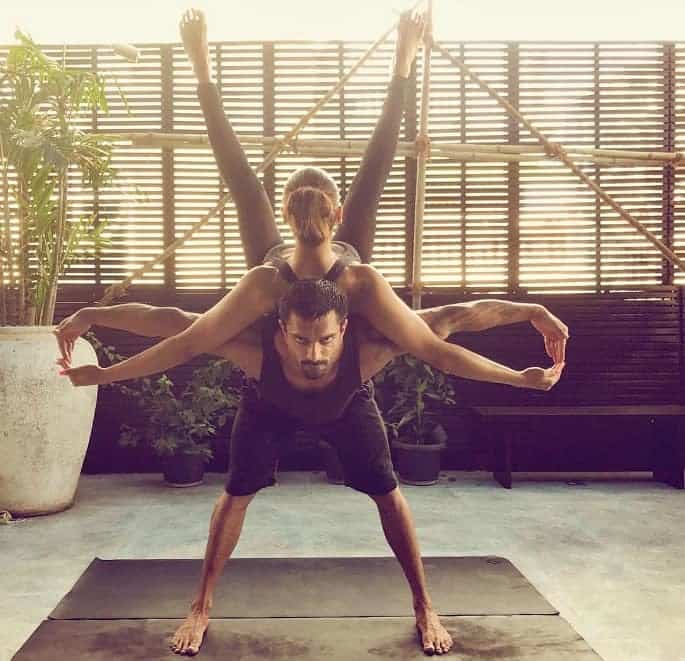 Bipasha Basu and Karan Singh Grove show off incredible couple goals with this unusual asana (pose). Depicting an infinity sign, the husband and wife use flexibility to link their arms together. Karan, in particular, shows off his strength by easily holding Bipasha on his back.

With perfect symmetry, the couple has captured the balance of both body and mind.

Bipasha and Karan have participated in yoga for a long time as they both dedicate time for their fitness workouts. The duo also replicated Ustrasana and Halasana poses flawlessly.

While Bipasha Basu has dabbled in various fitness DVDs, yoga has remained her passion. She describes it as: “a beautiful balance of Holding On & Letting Go. [sic]” 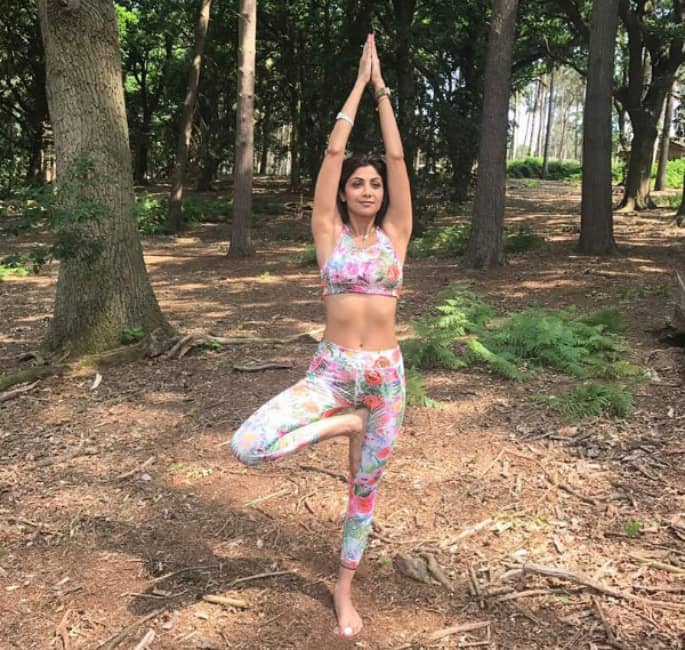 Shilpa Shetty Kundra hails as one of yoga’s most prominent ambassadors. While she has released DVDs on the practice, the star even created a YouTube channel dedicated to its many poses. She teaches watchers how to create the Suryanamaskar, amongst many others.

In the past, she has said:

“Yoga didn’t just help me with my body; I also became fitter from within. It helped me to focus better. In the movies, we may look very glamorous and fit, but believe me, not many of us are actually fit from within.”

In this image, Shilpa chooses an ideal location to practice – a natural woodland. Inspired by her surroundings, the actress shows off her balance with the Vrksasana.  And it seems the star’s son, Viaan, has taken a liking to it too.

On social media, fans can see the young boy joining his mother and developing his fitness in yoga. We wonder if Viaan will follow in his mother’s step and become the next poster child? 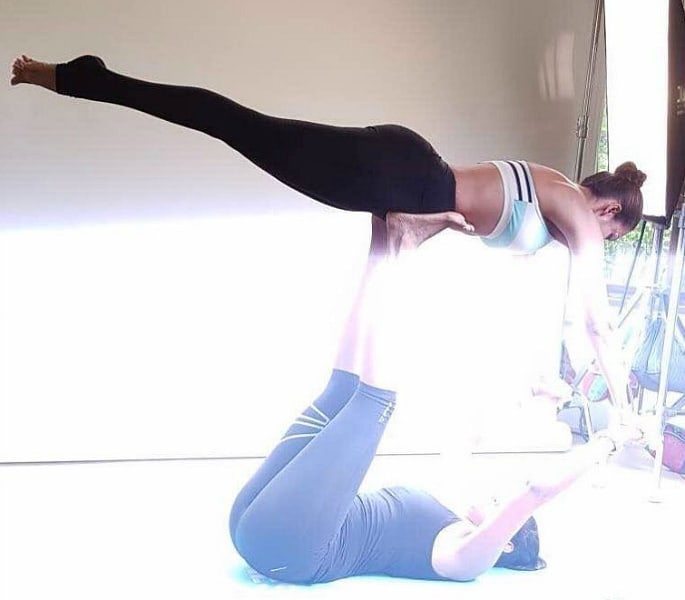 Malaika Arora has also become a big name for yoga. On social media, she regularly updates fans with her workout sessions and her excellent skill in creating asanas.

And check out her amazing strength in this picture here, practising with Anshuka Parwani, who trains many Bollywood stars.

The actress has also spoken before on how she found it to serve as a great workout session.

She explained: “Yoga serves many purposes – it is an effective way to shape and tone up for a better form of the body.

“At the same time, it also helps people calm and soothe their senses and get rejuvenated.” The star also hails the Shirshasana and Virabhadrasana II as some of her favourite poses. 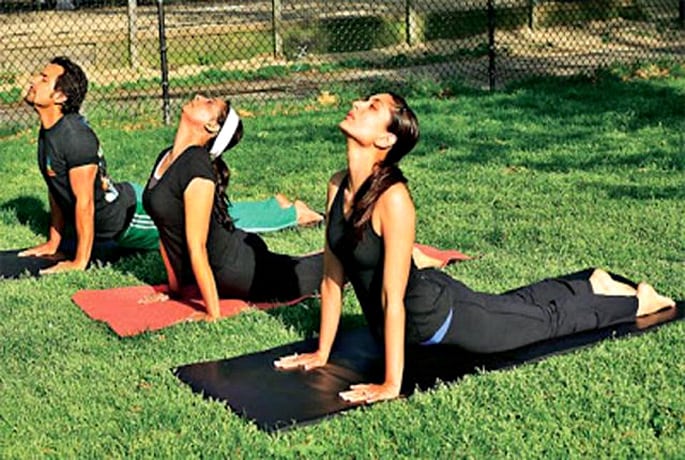 One of yoga’s biggest, current poster girls, Kareena Kapoor Khan has a long history with the practice. In 2008, she hit headlines after she lost an incredible amount of weight. She cited her weight loss as a result of performing 50 Suryanamaskars and 45 minutes of various poses.

In recent times, she has followed strict workout sessions both before and after her pregnancy. This shows how focused Kareena Kapoor Khan is to yoga. She also trains with Anushka Parwani, who recently revealed that Kareena was her first student.

The star has also introduced the practice to many others in Bollywood, including her husband Saif Ali Khan and Malaika Arora.

Kareena Kapoor Khan clearly believes in its benefits, claiming it has “transformed [her] life”. We’re left impressed by her dedication. 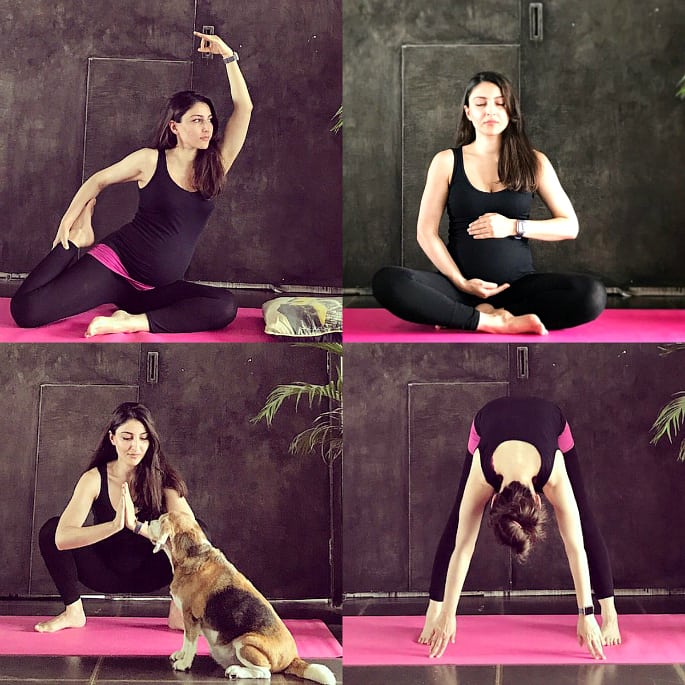 Kareena’s sister-in-law Soha Ali Khan has also joined the ranks of the Indian practice. The actress recently shared images on social media of her performing yoga while pregnant. Showing an array of various asanas, Soha reveals her amazing fitness.

On one of her images, she captions it with: “Who says you can’t stay fit when pregnant?!” The star shows you can still take care of your health and fitness, despite pregnancy.

The star may be new to the art, but perhaps we will see more of her workouts once her baby is born. She recently explained how she discussed with Kareena about keeping healthy during this exciting time of her life.

Perhaps she also asked for some yoga tips? 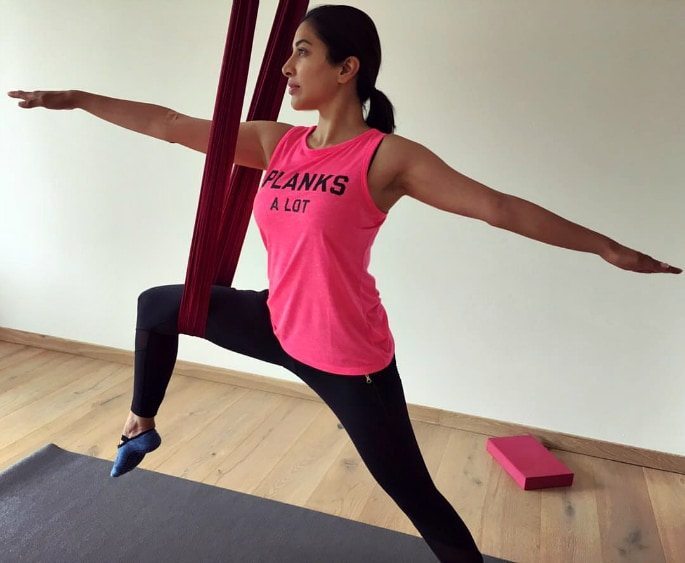 Another newcomer to the yoga scene. Sophie Choudry became well-known for her dedication to Pilates. But it seems the star has looked to try something new.

This extension of the ancient practice involves performing asanas with a hammock, supported up to the ceiling. While it provides the same benefits as its ancestor, aerial yoga supposedly strengths your mind and focus.

And it seems Bollywood are sold on this new workout, as shown by Sophie Choudry.

Regarding herself as a “Pilates girl”, she captioned this image with: “[I] am discovering #aerialyoga & lovin it! [sic]” Perhaps she may soon become a ‘Yoga girl’?

With so many stars showing off their incredible strength, flexibility and skill, we’re amazed by the benefits of yoga.

Whenever you need some fitness inspirations or goals, take a look at these incredible Bollywood stars.