Many critically acclaimed Indian comic authors have presented their witty and humorous flair time and again. We look at 5 writers and their work.

"She is the discovery of the decade.”

India is a culturally-rich nation with prolific literature at its very core, yet what many people overlook is its fantastic comic authors.

Typically, when considering some of the greatest comic authors one tends to think of American novelist Mark Twain, English writer P. G. Wodehouse or Henry Fielding to name a few.

Unfortunately, Indian authors do not instantly come to mind when thinking about comic novels.

However, this is not to say that Indian comic authors do not exist. They most certainly do.

Indian comic authors have produced captivating novels over the centuries. Their power to present serious issues in a humorous manner is certainly praiseworthy.

It appears they have mastered their comedic timings and this is evident in their novels.

We explore five Indian comic authors and their masterpieces which are worth a read. 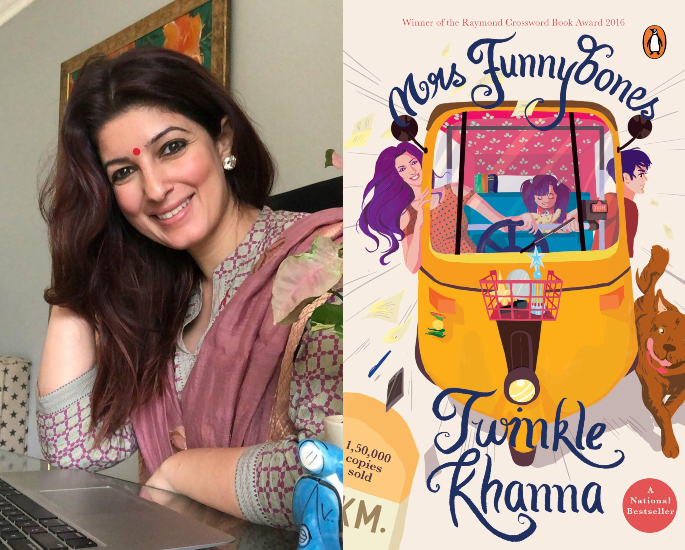 In 2015, she released her first non-fiction book, ‘Mrs Funnybones: She’s Just Like You and a Lot Like Me.’

‘Mrs Funnybones’ (2015) is a compilation of satirical stories from various newspapers written by the lady herself – Twinkle Khanna.

The light-hearted book also features hilarious anecdotes from her daily life and her amusing thoughts on each of them.

As well as her own life which relates to the average woman, she has included snippets of her husband, Akshay Kumar and mother, Dimple Kapadia in the book.

Her witty humour is evident throughout the book. One of our favourite lines from the book is based on her mother. It reads:

“I tell her, ‘It’s not funny, Mum, and sometimes you really do make stupid mistakes.’

‘Mrs Funnybones’ (2015) was hailed a success. In fact, Khanna was declared India’s highest-selling female writer in 2015. Published by Penguin India, the book was sold over 100,000 copies.

The book received praise from many publications. Times of India said:

“The funny bone definitely tickles but at the same time also jabs you hard.”

“I love Twinkle Khanna’s brilliant observations and self-deprecating humour – she is the discovery of the decade.”

As well as being a bestselling writer, Khanna is an interior designer, film producer and newspaper columnist. 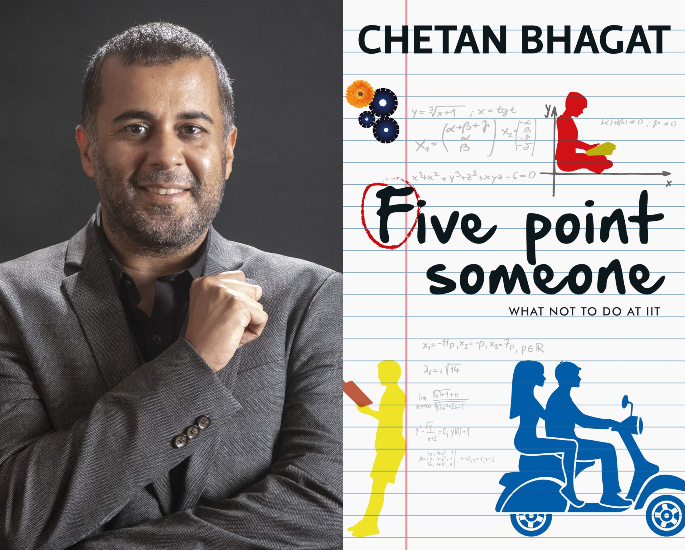 Renowned Indian author, Chetan Bhagat who started his career as an investment banker, decided to pursue his passion for writing.

And we are thankful he did. Bhagat has produced some of the finest literary works in India.

In fact, his first-ever bestselling novel ‘Five Point Someone: What Not to Do at IIT’ (2004) was just the beginning of his successful journey ahead.

The novel sold over one million copies across the globe.

The humour prevalent in the novel is certainly undeniable. Three friends who are challenged by the monotony of the academic domain sets the perfect scene for the novel.

While there are many hilarious episodes throughout, a particular event stands out.

This involves the episode where Ryan (one of the three friends) changed some words in his rival, Chatur’s speech.

This turns what was meant to be a respectful speech into a rather obscene and outrageous one.

The changes have everyone in fits of laughter both in the novel as well as the reader.

Alongside the humour, Bhagat also deals with serious issues of stress and suppressing creativity.

According to The Sunday Tribune, ‘Five Point Someone’ (2004) is certainly worth the read.

“The book, besides having a humorous appeal, also deals with the fears and insecurities of the students in one of the country’s top institutions.

“Its description of the lives of students in IIT or other higher-education institutions such as IIM or NID rings true.

“It could be Harward, except for the Desi flavour of the locales. The language is original and the dialogue fresh and youthful.

“Carry on, Bhagat. You are doing pretty well for a five-point ‘somethinger’.” 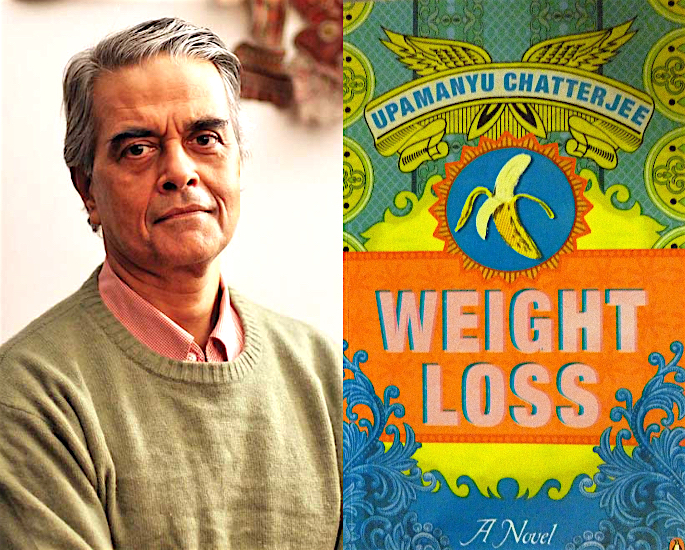 In this instance, his dark comedy novel, ‘Weight Loss’ (2006) revolves around the life of a sexual deviant and overweight, Bhola.

The novel follows his life from the young age of 11 to the mature age of 37.

Chatterjee utilised dark comedy in ‘Weight Loss’ (2006) to explore the notion of sex and lust which are usually considered uncomfortable to discuss.

However, he presents these serious issues as amusement for his readers.

The novel begins with 11-year-old Bhola who is obsessed with sex. In fact, no one is spared he fantasises about men and women and eunuchs alike.

As time progresses, Bhola is on the path of degrading himself and is addicted to “weight loss.”

He relates his dream of becoming slim to becoming ‘pure’ and purging himself of such desires.

Although the novel was met with mixed reviews, it is worth a read so you can decide for yourself whether it is praiseworthy. 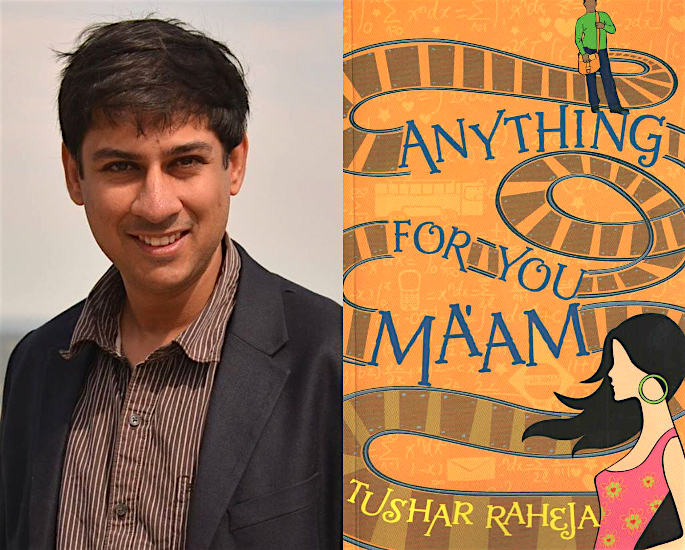 Delhi-based Indian storyteller Tushar Raheja began his writing career with his 2006 novel, ‘Anything for you, Ma’am’.

Interestingly, Raheja wrote his first novel while he was an undergraduate student at the Indian Institute of Technology Delhi.

His writing has been compared to renowned 20th century English author P. G. Wodehouse who was one of the most widely read humourists.

In fact, the plot of ‘Anything for you, Ma’am’ (2006) was compared to the saga of P.G. Wodehouse’s classic fiction characters Jeeves and Wooster by The Hindu.

Tejas Narula, the main protagonist, has the tendency to land himself into rather comical problems like Wooster.

While he is surrounded by characters like his family and friends who resemble Jeeves.

Tegas is a third-year student at the Mechanical Engineering Department in IIT Delhi who has fallen helplessly in love with his sister’s best friend, Shreya Ahuja.

However, Shreya resides in Chennai. Yet, Tejas is willing to travel from North to South India for his ladylove even if it jeopardises his career.

To do this he must dupe his parents and teacher. However, Professor Sidhu is determined to prevent Tejas from boarding the train.

Majority of the novel takes place on the train where Tegas is met with entertaining and humorous events.

‘Anything for you, Ma’am’ (2006) has also remained on the national bestselling list for novels since its publication.

If this does not entice you to read the novel, we do not know what will. 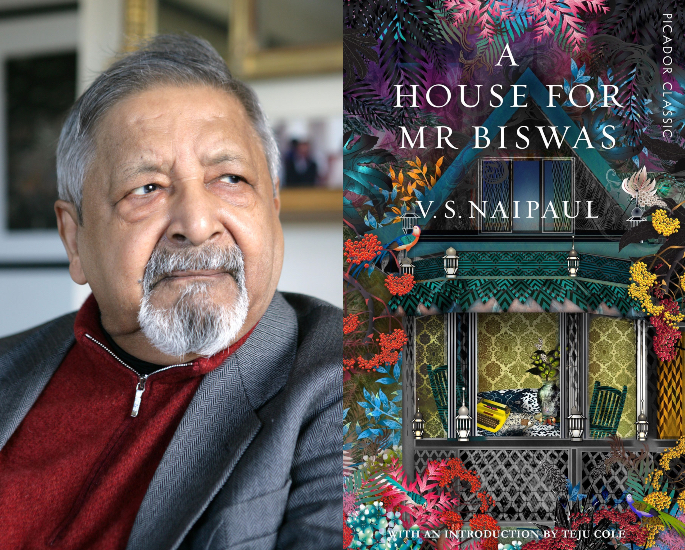 Sir Vidiadhar Surajprasad Naipaul (1932-2018), commonly known as V. S. Naipaul is a writer of both English fiction and non-fiction.

The author is widely known for his early comic novels set in Trinidad.

The Nobel Prize winner’s unforgettable masterpiece, ‘A House for Mr Biswas’ (1961) is hailed as one of the 20th century’s greatest novels.

It was also his first work which achieved critical acclaim worldwide. These include:

The story follows the life of Mohun Biswas who aspires to succeed, however, his endeavours usually end in failure.

Finally, Biswas sets himself a goal – to possess his own house.

Interestingly, ‘A House for Mr Biswas’ (1961) draws on biographical elements from the author’s father’s life.

The popularity of ‘A House for Mr Biswas’ (1961) saw the novel being adapted as a stage musical with compositions by Monty Norman.

The established author has also won several accolades for his contribution to literature. These include:

Another honourable mention by V. S. Naipaul is his 1957 comic novel, ‘The Mystic Masseur.’

The comedy genre in Literature is one that Indian authors certainly resonate with.

Give these Indian authors and their amazing works a read. We guarantee you will be left in fits of laughter while feeling compelled to consider their thought-provoking topics.

Ayesha is an English graduate with an aesthetic eye. Her fascination lies in sports, fashion and beauty. Also, she does not shy away from controversial subjects. Her motto is: “no two days are the same, that is what makes life worth living.”
10 Best Indian Fantasy Fiction and Sci-Fi Books to Read
British Asian author Serena Patel talks Children’s Books