The 70s and 80s saw the emergence of some interesting Bollywood cowboy movies. Most of these films achieved cult status as opposed to being critically acclaimed.

Bollywood cowboy movies were primarily inspired by the western genre, adding some Indian masala to the storylines.

Dacoits had a big part in Bollywood cowboy movies, along with a recurrent theme of avenging death.

The films highlighted some gun-slinging and saddle riding Bollywood actors. Feroz Khan was the first original cowboy star of Bollywood, dominating these films with his swag and style.

Later Mithun Chakraborty took the mantle from Feroz. The classic representation of the cowboy look was prominent in these films.

Here’s our round-up of some classic Bollywood cowboy movies, with multi-starrer casts. 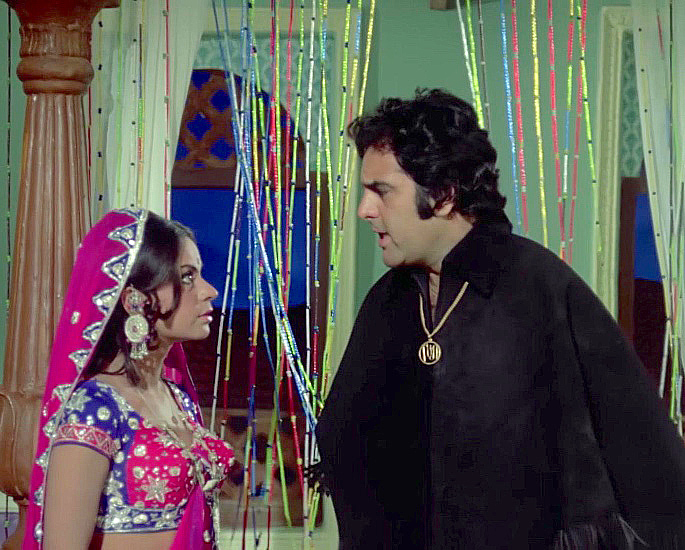 Feroz Khan features in the main lead role as a horseback rider called (Dilbar). Despite his differences, Dilbar joins forces with five petty criminals to save villagers from dacoits led by the brutal Junga (Ajit).

The lone ranger has a personal score to settle with Junga. The dacoit killed Dilbar’s father (Satyen Kappur: Judge) after he had convicted him in a court of law.

Can Dilbar and the five men protect the villagers? Does Dilbar succeed in avenging his father’s death?
See how the film unfolds, particularly with its thrilling climax.

Rehana Sultan is the main female actress in the film, playing the village girl Rani.

Kalyanbrata Bose posted his thoughts about Khote Sikkay and Feroz Khan on YouTube:

“Good movie i like Feroz Khan he is Indian cowboy.”

In this Bollywood cowboy flick, Feroz Khan wears the poncho with style. Naturally, horses play a big part in the film too. 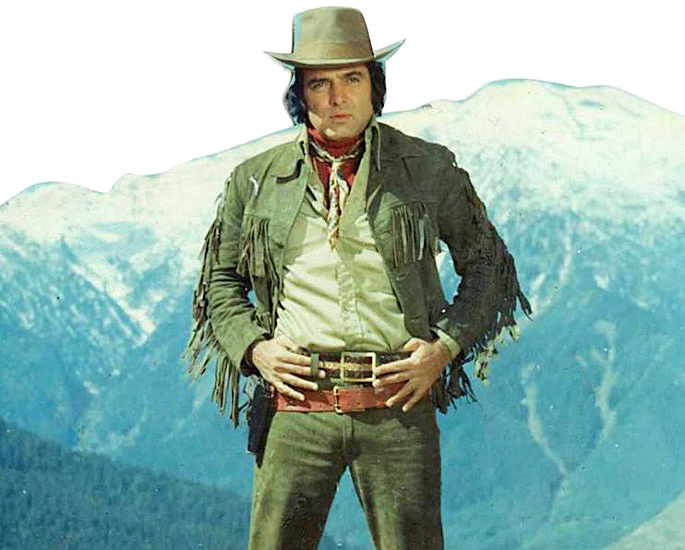 The film revolves around Rakesh who is on the hunt for Poppy Singh (Prem Chopra), a bandit and underground cocaine smuggler who murders his father.

After Rakesh arrives in a far off mountainous village near Singh’s hideout, he befriends Shera (Danny Denzongpa).

After this film, many began describing Feroz as the ‘Clint Eastwood of Bollywood.’ 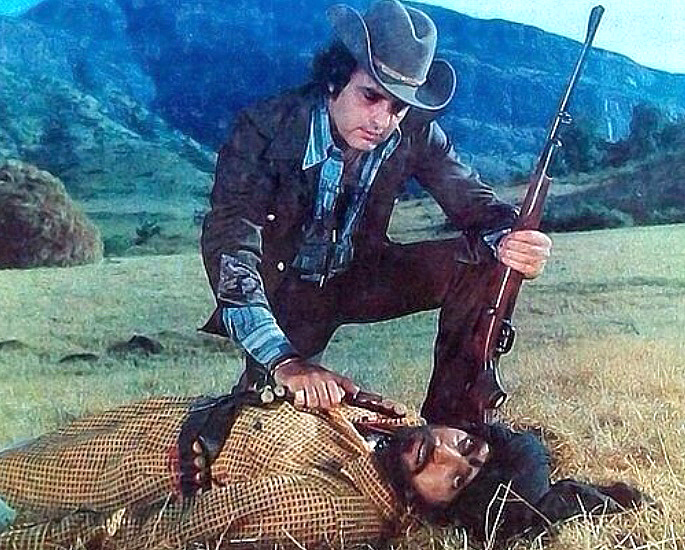 Like a typical Bollywood villain, Ajay captures Vijay’s mother (Mumtaz Begum). Ajay’s assistants then also drag Vijay to their leader’ nest, which is a luxury place.

With the mother and son in Ajay’s custody, Vijay’s girlfriend Roshni (Neetu Singh) comes to their rescue. From then on, audiences get to see a classic sword fight between Vijay and Ajay as the film comes to its climax.

Chunaoti has two famous dialogues in the film:

There is an unforgettable scene in the start when Vijay kills a dacoit and smokes a cigarette.

His cowboy look adds even more class to the sequence.

Even Roshni gets to look like a cowboy mountie in all red. Guns, horses, saddles, and cowboy-style waistcoats give the film a very modern and western feel. 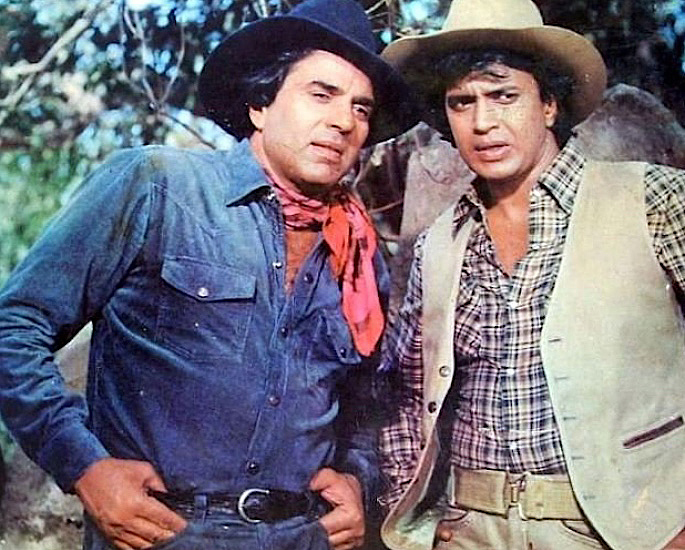 Jagir is an action-adventure western film which has a big cast line up. Dharmendra (Shankar), Mithun Chakraborty (Sanga) and Danny Denzongpa (Danny) are like three musketeers in the film.

Shankar (Dharmendra) is the son of Maharaja Shoorveer Singh (Kamaal Kapoor).
Daku Lakhan Singh kills the Maharaja when he refuses to hand over a royal locket which has the map to his kingdom’s treasure.

Shankar escapes death, with the help of Mangal Singh (Pran), a loyalist of the Maharaja. Punishing Mangal, Lakhan hacks one of his arms with a sword.

Shankar loses his memory whilst meeting an accident when escaping from the evil Lakhan Singh. Shankar grows up unaware of his background.

Sanga who also becomes a victim of Lakhan is the son Mangal. He falls into a nomads carriage who raise him. Danny and his family also become victims of Lakhan. But Danny has a photographic memory, which is useful.

Lakhan who later lives in the city disguises his past and becomes industrialist Thakur Saheb. Despite moving to an urban base, Thakur continues to pursue the treasures of Anjangadh.

Meanwhile, friends Shankar, Sanga and Danny all fight off Lakhan Singh so that justice prevails in the end.

Zeenat Aman who plays Seema falls in love with Shankar. Whilst Shoma Anand as Asha is the lady love of Sanga.

The iconic song ‘Hum Dilwale’ see the main trio in traditional cowboy outfits. Their cowboy hats are quite prevalent in the song. Sanga’s red cowboy boots also stand out very much. 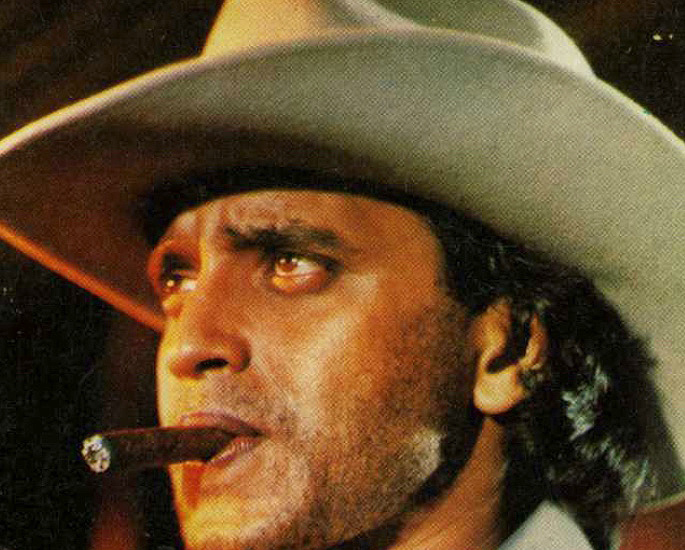 Wanted: Dead or Alive is a spaghetti-western film with plenty of action and adventure. Tragedy strikes following the marriage of honest forest officer, Vikram and his lover Angela (Deepti Naval).

Vikram himself is framed for the murder as he goes out to avenge Angela’s death. After serving his prison sentence, Vikram becomes a prime suspect yet again.

Neeta (Tina Munim) believes Vikram was behind the murder of her father.

Extraordinary acting, good dialogues and brilliant comic timing are the key aspects of this film.

Praising the musical score of the film, an IMDb user writes:

“Jaani Jaani” & “Tumsa Nahi Dekha” By Kishore Are Too Good.”

From head to toe, Mithun, along with some of the other actors are dressed in cowboy attire in the film.

Lasting a decade, there were very few Bollywood cowboy films. Kacche Heere (1982) starring Feroz Khan was the only other cowboy action film made in Bollywood.

As they say, “little is better than nothing.” So if you fancy some action and to enjoy a little ride, watch these Bollywood cowboy movies.

Faisal has creative experience in the fusion of media and communication and research which increase awareness of global issues in post-conflict, emerging and democratic societies. His life motto is: "persevere, for success is near..."
Akansha Ranjan Kapoor talks ‘Tanu’ in Netflix’s GUILTY
Dharmendra ‘didn’t like his Daughter Dancing’ and Acting