25 Years of DDLJ: SRK & Kajol’s London Statue to be Unveiled

A bronze statue of SRK and Kajol will be unveiled in London’s Leicester Square to celebrate 25 years of Dilwale Dulhania Le Jayenge (DDLJ).

To commemorate the 25th anniversary of the classic Bollywood film, Dilwale Dulhania Le Jayenge (DDLJ), a bronze statue of actor Shah Rukh Khan and Kajol will be unveiled in London.

Released on October 20, 1995, DDLJ marked the directorial debut of Aditya Chopra. It also catapulted SRK as a romantic hero in Bollywood.

The romantic film revolves around the lives of Raj and Simran, two very different characters.

During their tour around Europe, the two unlikely individuals fall in love. However, Simran is betrothed to her father’s friend’s son in India.

In order to win his bride, Raj must seek her family, namely her father’s approval.

DDLJ is the longest-running film in the history of Indian cinema. It continues to be shown at the Maratha Mandir theatre in Mumbai.

In fact, to celebrate the 20th anniversary of DDLJ, the evergreen couple hosted an event at the same theatre.

The statue will portray a part of a scene which was shot in London’s Leicester Square.

London’s Leicester Square holds a special place in the film’s story. It is the place where Raj and Simra first crossed their paths in DDLJ. 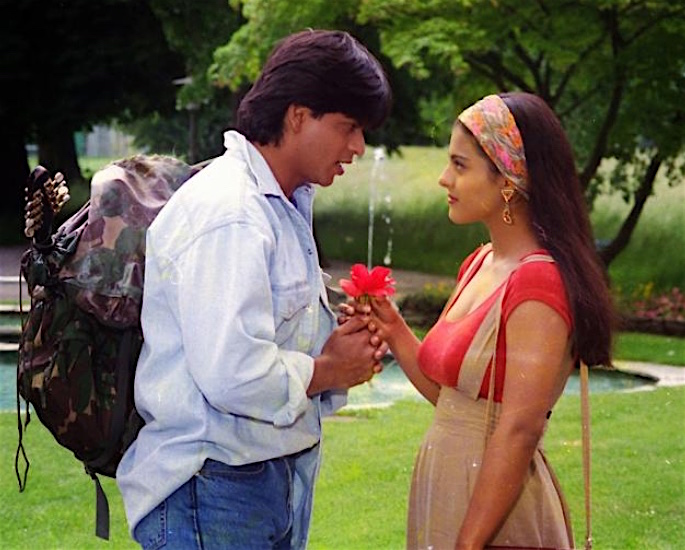 The statue of Shah Rukh Khan’s Raj and Kajol’s Simran will be amidst nine other iconic cinema characters.

“It’s fantastic to be adding such titans of international cinema as Shah Rukh Khan and Kajol to our trail.”

“Dilwale Dulhania Le Jayenge is one of the most successful and important Bollywood films of all time, and it’s exciting to be able to bring to the trail the first film that actually features Leicester Square as a location.

“This statue is a fitting tribute to the global popularity of Bollywood and the cultural bridges that cinema can help build, and we’re in no doubt it will attract fans from all around the world.”

Ayesha is an English graduate with an aesthetic eye. Her fascination lies in sports, fashion and beauty. Also, she does not shy away from controversial subjects. Her motto is: “no two days are the same, that is what makes life worth living.”
Raveena Tandon slams the ‘Big Guys’ who ‘Ruin People’
Vijay Sethupathi Leaves cricketer Muttiah Muralitharan’s Biopic