The hype around Salman Khan’s action-packed Kick just keeps growing. Even if you didn’t need any more convincing, DESIblitz gives you 10 reasons why to watch Kick.

We can give you loads of reasons why we think Kick is going to be one of the biggest blockbusters of 2014.

But for now, DESIblitz presents its top 10 reasons why you shouldn’t miss this Salman-filled action flick.

The trailers of Kick are proof enough that the first time on screen pair of Jacqueline and Salman has a hot sizzling chemistry. Jacqueline catches our attention in her spectacled geeky look as well as in the sexy red lace dress doing a split with her long toned legs in the song ‘Jumme ki Raat’.

As predictions are high regarding Kick outshining all records of Salman’s films so far, Jacqueline and Salman’s fresh jodi too is at stake as all are waiting to see what magic they will create on the big screen.

Eid has proven lucky for Sallu and his fans. Seeing the way Kick is trending, it’s an undeniable fact that Kick will be a blockbuster too. For Sallu fans, Eid is equivalent to ‘Salman Bhai Day’.

The stunts and action of Kick are as stupendous as any Hollywood flick and why not, as the film has stunts choreographed by Philippe Guegan and Spiro Razatos, who have done stunts for The Transporter, Hitman and Taken before.

The treat to Salman fans is that for the first time Bhai will be seen doing stunts all by himself without a body double. In Kick, Salman will be seen hanging from the 40th floor of the tallest building in Poland.

Bhai’s fans cannot stop talking about the scene where he pushes the cycle and walks effortlessly in front of a speeding train. 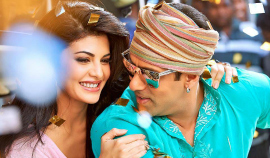 The songs of Kick are proving to be a treat to the ears as they are breaking all possible records and are absolutely foot tapping. The music album swanks songs in the voice of Mika Singh and Yo Yo Honey Singh.

Not just that, news is that Salman Khan himself has sung all the songs of Kick as well. Often a commercial movie owes its success to hit songs and looking at Kick’s songs, a blockbuster is guaranteed.

When it comes to Salman Khan films, you expect nothing less of a complete package from him. Kick too has power-packed action, comedy, romance, suspense, and super-hit songs.

Sajid wants to deliver the best experience with his directorial debut Kick and is leaving no stones unturned. 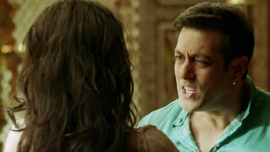 Like any other Salman movie, Kick too has dialogues that will haunt you for a long time. As the trailer went viral, Salman fans went crazy after hearing the Salman flavoured dialogue: “Mere bare mein itna mat sochna, Dil mein ata hu, samajh mein nahin.”

Salman is also heard saying fun dialogues like: “Woh jeena bhi kya jeena jismein KICK na ho pagli!” Everybody is going gaga about the dialogues and the way Salman delivers them. His fans sure can’t wait to hear more like these.

For the first time, Nawaz of Gangs of Wasseypur fame will play a powerful role in a complete commercial film. Hopefully, Randeep Hooda too, will get his long deserved recognition with Kick’s success. 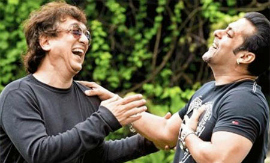 Sajid Nadiadwala who has produced and directed the film has made sure that Kick will be a value for money film.

The rich feel of the film, the power packed action, songs, star cast and just about everything looks great and will pull audiences to the cinema.

Nadiadwala has spent enough money on the film making sure that it will have everything much grander and Salman in a never before seen avatar.

Not just Salman fans but Bollywood celebrities too can’t help talking and tweeting about Kick. Legendary actor, Amitabh Bachchan tweeted: “Did you see the trailer of Kick. baaadooom!! Compares with anything that the other ‘wood’ brings out from their high end films!”

Even Ajay Devgn recently said in an interview: ”I think it’s a fabulous promo. The first promo is the most important one, so most of your job is done if your promo is appreciated.”

Our last but truly the best reason to watch Kick is that it’s a Salman Khan starrer. Salman, in the trailer itself leaves a box-office shattering impression and also looks fitter and hotter than ever.

For Kick, he has made sure that every frame is mind-blowing and has personally checked in the monitor before giving a nod to every shot.

DESIblitz has given you enough reasons to watch Kick. The fact is, a fit, sexy, scrumptious Salman Khan is hard to ignore especially on Eid! Make sure you catch Salman in Kick releasing from July 25.

Komal is a cinéaste, who believes she was born to love films. Apart from working as assistant Director in Bollywood, she finds herself doing photography or watching Simpsons. “All I have in life is my imagination and I love it that way!”
London Indian Film Festival 2014 Opening Night
Sold is Huge Success at LIFF Opening