Superstitions are a part of any culture, but some are more practised than others. Read here to find out about superstitions in Pakistan.

"Her mum instilled the fear"

But not all superstitions are channels for bad luck or negative energy. Glimpsing two magpies is good luck, crossing two fingers or hunting down an elusive four-leaf clover also promises good fortune.

Superstitions are immersed in our lifestyle, blurting out ‘that’s good luck’, ‘cross your fingers’ or ‘break a leg’ is normal amongst friends or strangers.

For many people, they’re not strictly adhered to but cautiously observed. Shah says, “I think they’re silly but I still wouldn’t walk under a ladder.”

Yet, superstitions must have a source, a time and a place. Some superstitions prove to be more popular in some areas of the world where they are passionately followed. Others are dismissed as silly and bear no weight.

Superstitions in Pakistan are often followed by many people in rural areas. However, superstition is ingrained in their culture and upbringing.

As Pakistan is a young country, born in 1947, many Pakistani superstitions have become blended with Indian origins.

50% of people in rural Punjab are superstitious. DESIblitz discusses 10 superstitions practised in Pakistan, what they mean and their backgrounds. 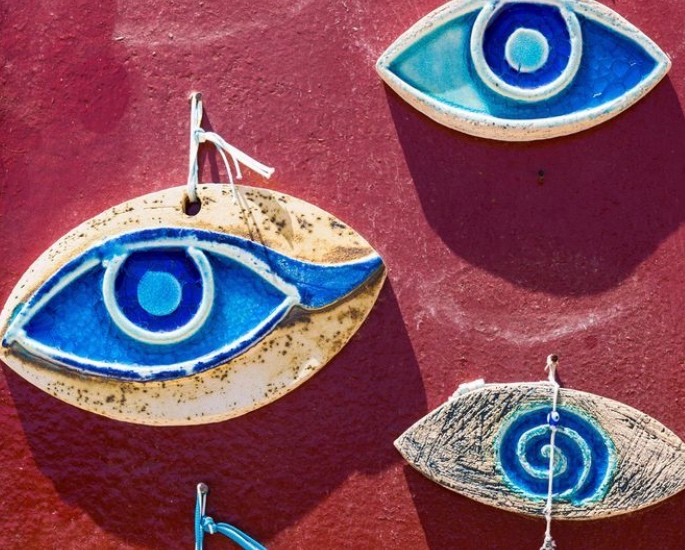 Every Desi, Turkish, Arabic, and even Greek household knows what nazr is. In English, it is simply named, evil eye. An unambiguous translation. Legend says “receiving the evil eye will cause misfortune or injury.”

Nazr is a common belief. It’s easy to do and have done to you. All it requires is a quick glance, praise, a flicker of jealousy towards another person and nazr is planted.

Maria says, “I believe in the evil eye, but in the sense of bad energy… evil eye is bad vibrations from our environment.”

As nazr is so widely assumed, the original source is difficult to pinpoint. Some people deem it as a religious superstition, stemming from Islam. Others say it began as cultural but now is universal.

16% of Asian Americans surveyed reported they believed in the evil eye.

Many people take protective measures to avoid the evil eye. This includes hiding or purposely refusing to discuss upcoming projects, achievements or plans.

Having a goat slaughtered daily to ward off evil eye was Asif Ali Zardari’s, a former Pakistani President, fixation.

According to a Pakistani newspaper, Dawn, a black goat was sacrificed daily and the meat was distributed amongst the poor in hope nazr would not inflict upon Zardari.

Unfortunately, the evil eye can manifest both positively and negatively and cannot be truly prevented.

To reduce its effects, many people embrace pendants, plants and physical objects, but nazr is hard to measure. Seeing any tangible results from these charms is challenging. 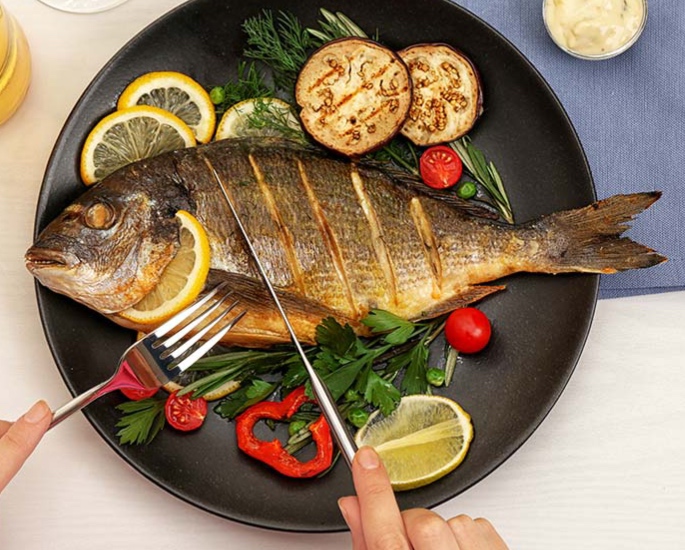 This is a popular saying in Pakistan. Apparently, consuming fish after drinking milk can make your skin erupt in a sea of white spots.

These sayings trigger a deep phobia in people, providing an explanation for followers of this superstition.

There is no scientific evidence confirming consuming fish after drinking milk elicits white spots, and yet it is still widely practised across Pakistan.

Zarah says, “My mum refuses to eat something like a tuna sandwich if she’s drank milk 10 minutes before. Her mum instilled the fear that white spots will appear everywhere.”

Many people attribute the Ayurveda, an alternative medicine book, to be the source of this superstition. It reads “mixing milk and fish is bad for you.” An ambiguous statement which is open to many interpretations.

Cutting hair or nails at night 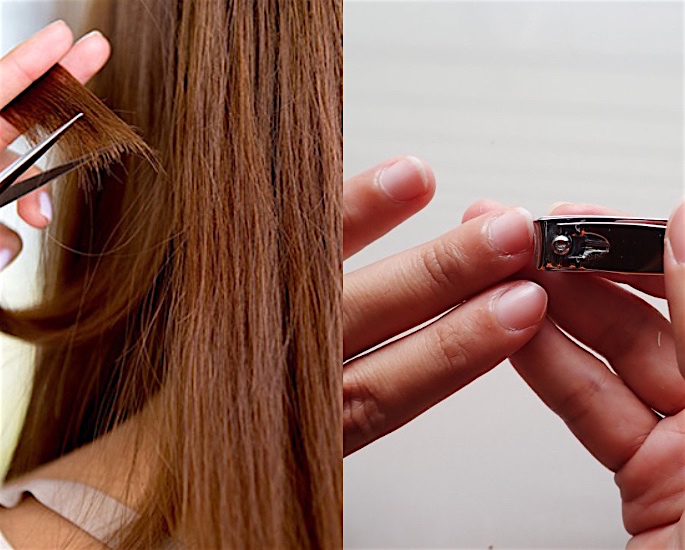 Hair and nails are gateways to DNA. The full superstition is cutting hair or nails at night means Jinns or evil spirits can collect them and use them to possibly cast black magic on the family.

The Goddess Lakshmi is known to enter homes after dark, so cutting hair and nails would be considered a sign of disrespect. This superstition has been customary for generations.

It feeds into another niche Indian superstition: “Stepping on someone’s hair will give them a massive headache.”

Offering another reason why hair and nails should not be cut at night is that it would be harder to see fallen hair in the dark, impossible to pick up, possibly leading to someone having a ‘massive headache’.

An additional reason relates to time. It is darker at night (obviously) and without electricity, hair and nails would accumulate which is unhygienic to have in the house.

The risk of cutting yourself on a blade also dramatically increases. Fatima said:

“I was taught this, but I don’t adhere to it. I think of this saying every time I cut my nails at night.”

In fact, the saying has branched out. Some people were told hair or nails should not be cut on Tuesday, but other people recall Wednesday being the day to avoid.

If your palms are itchy then money is coming your way 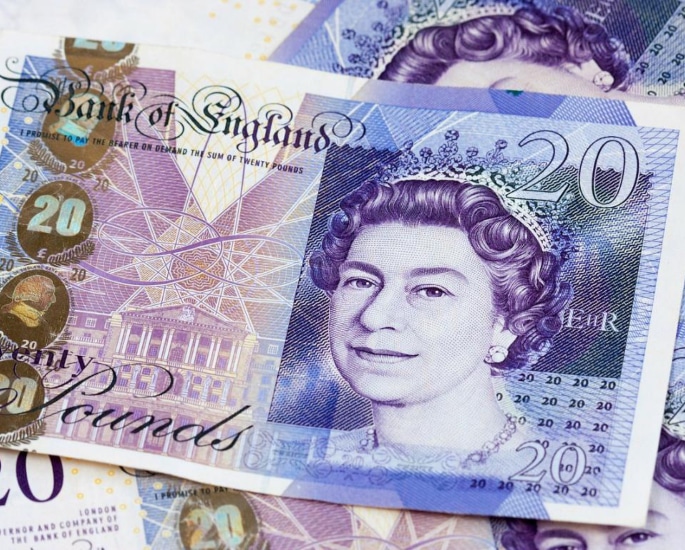 Although typically believed in Pakistan, this superstition has European roots. According to Celts and Saxons, having an itchy palm can be cured by scraping a silver coin up and down your palm.

Left to receive, right to give.

In some cultures, this is the case for women. But for men, it is the other way round.

Apparently, when your left hand is itchy, The Goddess Lakshmi – responsible for prosperity – leaves you.

As Pakistan and India are so closely connected, in terms of culture and proximity, this superstition is also prevalent in Pakistan.

If you sneeze it means someone is missing you 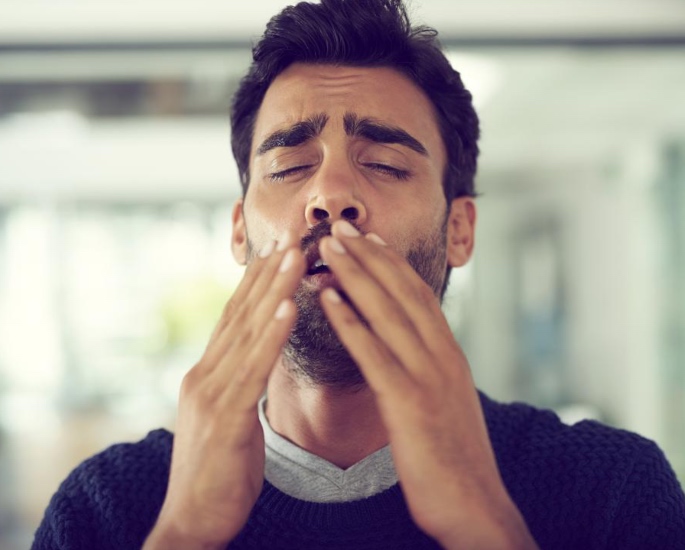 Superstitions can be sweet! This one harms no one, it’s not a warning, just a little reminder out there someone misses you.

However, a different interpretation is ‘sneezing means someone is thinking of you’ which could be positive or negative.

There are a few variations of this phrase, also involving something physical happening. According to Pakistani folklore, hiccups are another sign someone misses you.

It’s a sign superstition, where someone has to act, in order for you to sneeze. Unfortunately, this means it is out of your control.

In India, sneezing before leaving the house is often inferred to be a bad omen.

Akash says, “I can’t leave the house if I sneeze, I spin around, walk back and then I can leave (thanks to mum who made me do it).” 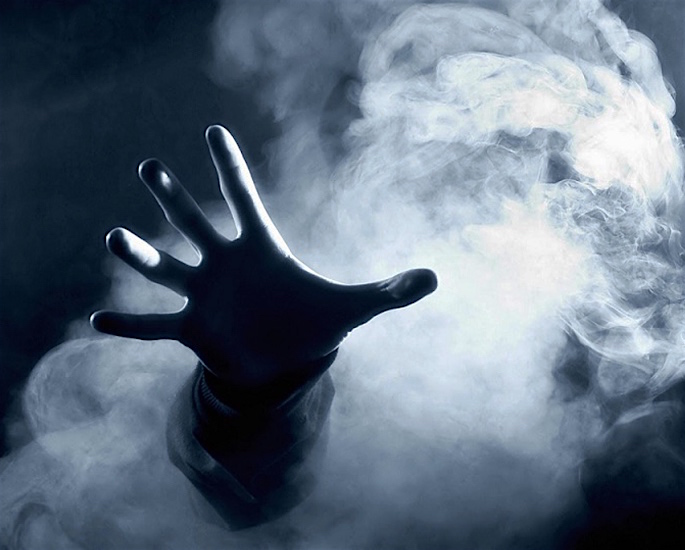 Jinns are mythical creatures borne out of Arabic and Islamic literature. They occupy the supernatural ability to possess humans and animals, due to their unique make up of fire and air.

They are situated higher than humans in the divine hierarchy, sitting just below angels and devils.

Mischievous creatures, they delight in pulling pranks and teasing humans, but are blamed for a lot of accidents and diseases.

As no one likes being possessed, there are a few Pakistani superstitions to avoid Jinns:

Sheherzad said that she had heard ever since she was a child that her mother told her that once you take a shower, or apply perfume to smell nice, you are more likely to attract Jinn.

Folklore dictates Jinns roam after night, they are drawn to pleasant smells and hide on high branches. Simple preventative measures are the basis of these superstitions.

It’s in the eyes 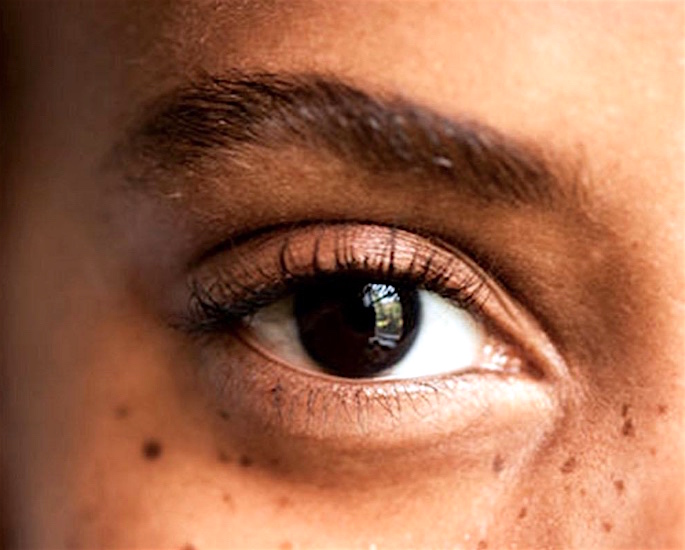 Excluding nazr, there are a few more superstitions involving eyes. If your left eye twitches, it’s a sign of bad luck. However, if your right eye twitches, you’re destined for good luck.

There is no distinct foundation for this saying, perhaps developing out of circumstance rather than evidence.

But if your eyes spontaneously flutter, it means someone misses you. A wives tale, dressed as truth, but something many Pakistani’s believe in. 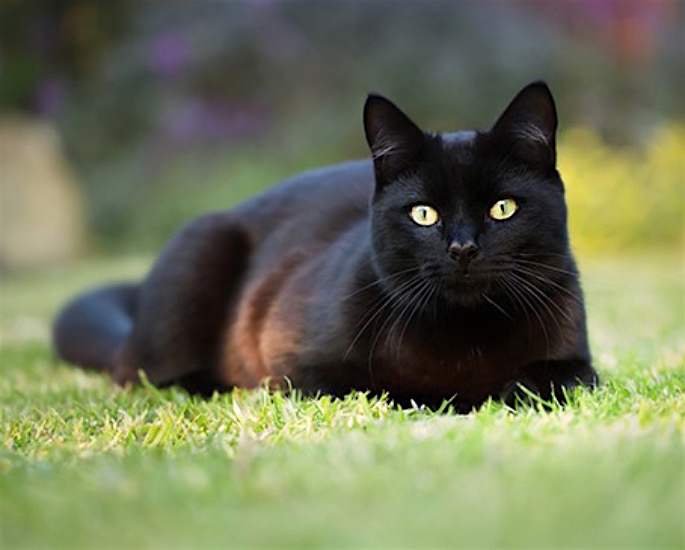 A notorious superstition, as old as time. It all started from the myth black cats are actually witches or familiars of witches, leaving a trail of calamity wherever they venture.

In Pakistan, there is a fear shrouding magic, witches and possession. As black cats are a symbol of this world, they are vehemently avoided. It is said an evil spirit could enter a black cats body.

They are an omen of misfortune, often said to bring death. However, in some countries, like Germany, if a black cat crosses you left to right, it may bring good luck.

The source of this superstition is not known, but is thought to have started in Europe.

When a black cat does come your way, there are a few things you can do to disrupt the oncoming misfortune. When crossing the road, hold onto a friend to avoid an accident or death.

Or, if alone and wanting to cross the road, you can spit three times into oncoming traffic. 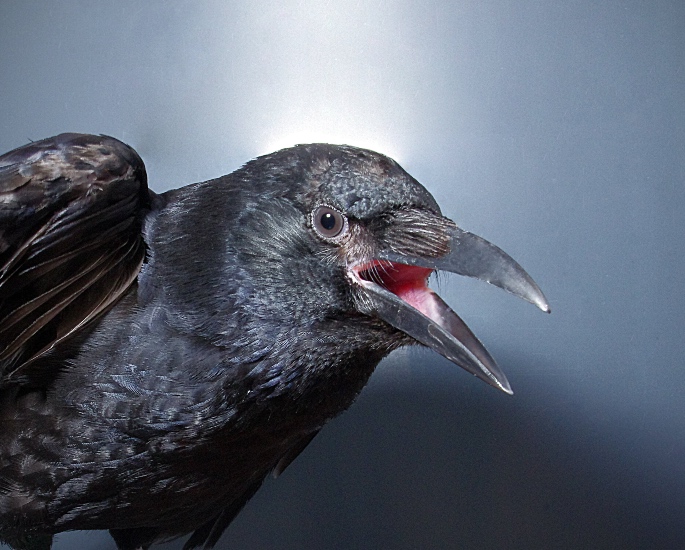 No one really likes a surprise arrival of guests, so crows were used as warning sirens. This superstition has roots in India, where crows would often frequently visit balconies and caw at people near the home.

Crows are also known to signify death and bad luck, as well as success and good luck. It’s a numbers game.

Different numbers of crows signify bad luck. One means something misfortunate is near, six means your health will turn.

Of course, there is no real basis for this system, but it is a superstition popular with magpies too.

Don’t sweep the floors at night 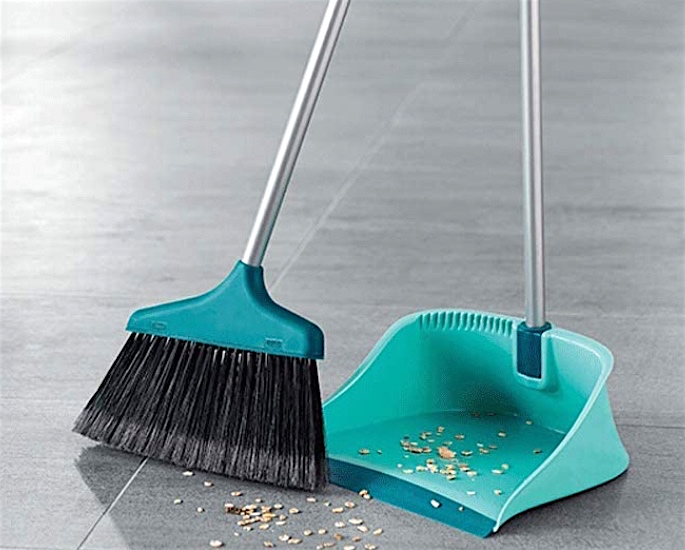 This superstition started in India, where it was said the Goddess Lakshmi avoids homes of people working during moonlit hours.

In rural Pakistan, it is rumoured sweeping at night decreases employment and is not encouraged in many societies.

It is also thought sweeping the floor at night will brush away any good luck. Sweeping floors with only the moonlight to guide you could lead to important objects being tossed, like precious stones or papers.

Furthermore, other versions of this superstition reveal sweeping or mopping after sunset may attract unwanted strangers to visit.

However, bar the last one, these superstitions were formed before the discovery of electricity, perhaps a leading element into their creation.

These could be the background of these superstitions which have just snowballed over the years.

Superstitions play a pivotal role in how Pakistani’s view their culture which unveils a formula of how they gather fortune and avoid misfortune.

Hiyah is a film addict who writes in between the breaks. She sees the world through paper planes and got her motto through a friend. It’s “What's meant for you, won’t pass you.”
Why Pakistani Bride Rights Matter in a Nikkah Contract
Living with Alcohol and Drug Abuse in Desi Households