Sandwiches are enjoyable because they can be filled with almost anything. Spice them up by trying some of the Indian sandwich recipes and fillings we have.

If you want something that is a simple snack and has Desi spices, then an Indian sandwich is an option to go for.

The fillings are crammed with various Indian spices to create something typically seen in Indian cuisine. Putting them between slices of bread turn it into a delicious snack.

They provide a great alternative to the standard sandwich and highlight how versatile the food is. There are a plethora of food items which can go into a sandwich.

An Indian sandwich is similar because a lot of ingredients can taste great as a sandwich, but these burst with flavour in every mouthful.

Some fillings are even Indian dishes which have been altered to go between bread.

Although they may seem complicated, they are actually relatively simple.

These recipe guides will help ensure that sandwich making will be easy and the result will be a tasty snack. Here are 10 Indian sandwich recipes to enjoy. 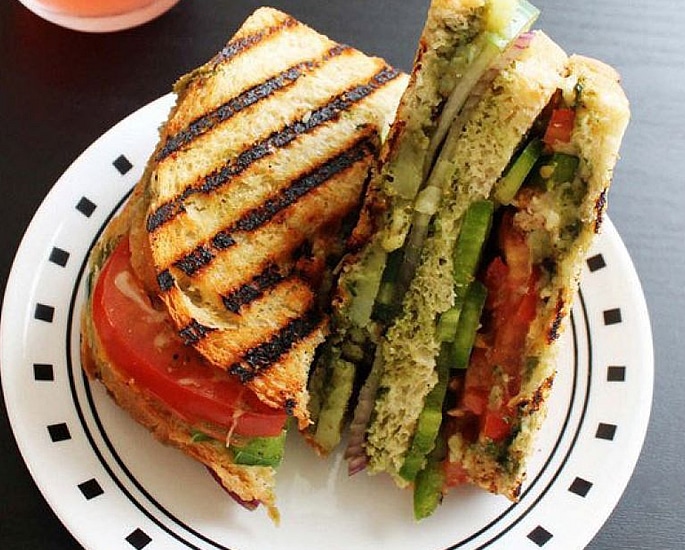 A grilled sandwich is delicious because the filling is warmer and the slight crunch of the bread adds a whole new level of texture.

A Bombay vegetable sandwich is a great option to try as it combines multiple vegetables into one meal.

As a result, there is a range of flavours and textures especially combined with the array of spices.

This snack is famous throughout India and is one of the menu options at many sandwich stalls.

For the Sandwich Masala 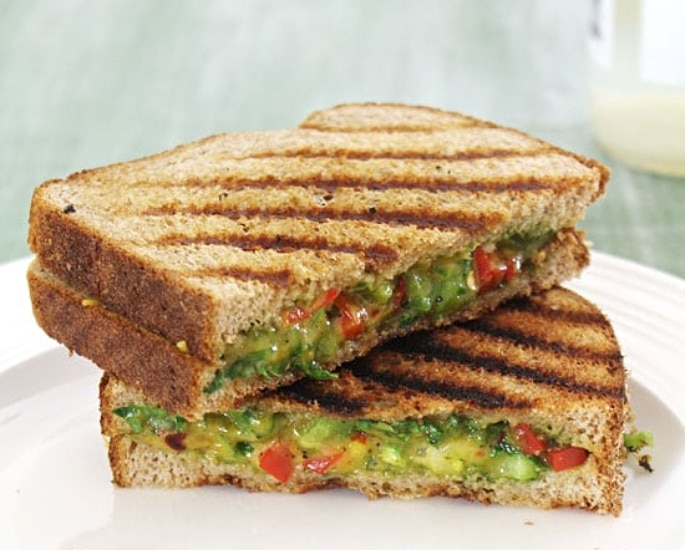 The cheese toastie is a popular choice when it comes to sandwiches and this chilli cheese recipe is a delicious variation.

The mixture of gooey cheese along with the subtle hints of spice is a delicious combination as the mild cheese has an injection of flavour.

Butter is spread on the outside of the bread. This crisps up the bread but it also prevents the cheese from becoming congealed.

You can use whatever cheese you prefer. But no matter what, the result is a delicious and filling snack which can be enjoyed at any time. 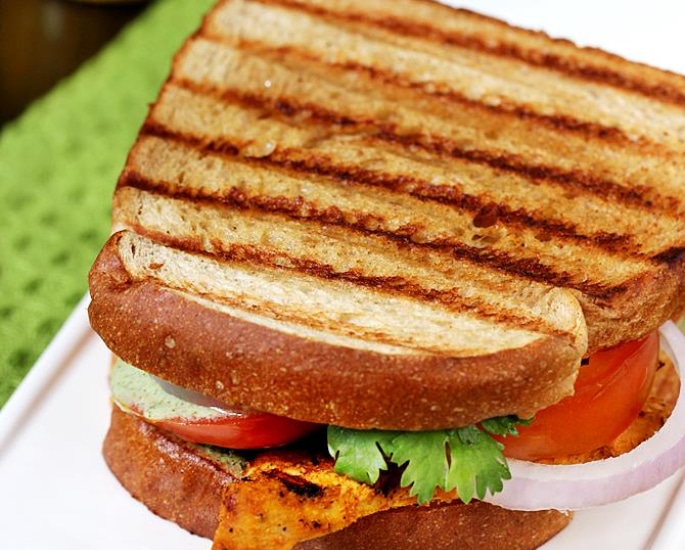 Tandoori chicken is considered to be a classic within Indian cuisine. As a sandwich, it is an enjoyable treat.

The recipe uses a marinade full of ingredients to create an authentic tandoori chicken. The chicken is then placed onto grilled bread and covered with onions and tomatoes.

The onion adds an extra bite to the already flavourful chicken, while the condiments spread on the bread adds a refreshing touch.

This recipe was adapted from Indian Healthy Recipes. 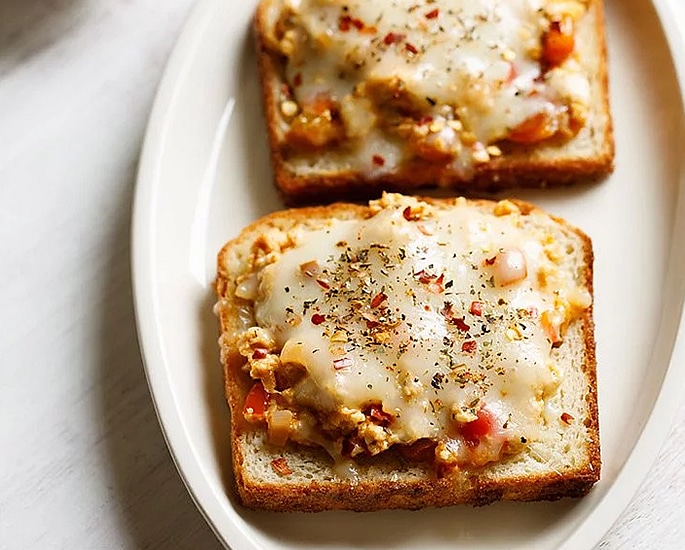 A paneer cheese toastie is a delicious Desi alternative to the classic snack. The spicy flavour provides a great contrast to the mellow flavour of the cheese.

The tomato has a slightly acidic flavour to offset the spices. It also uses mozzarella cheese for an extra depth of flavour as it has a different taste to the paneer.

It is a simple sandwich recipe, which can be eaten at any time of the day. While it can be made a number of ways, it is best cooked in a griddle pan. 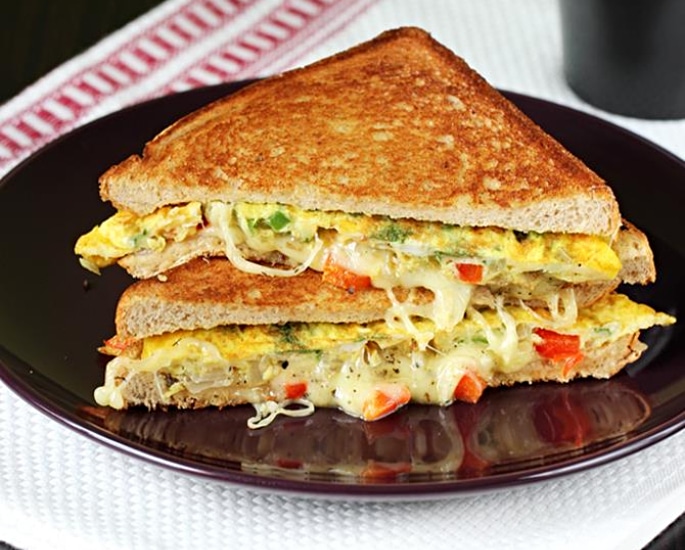 There is nothing like an omelette sandwich and this Desi-style one is no exception.

It is popular street food in India and there are many variations which are enjoyed as breakfast.

This one uses onions and chillies in the egg. They add a hint of bitterness and heat to the whole dish and the pepper offsets that with it’s more mild taste.

The cheese makes it even better as it melts to create a rich, filling snack. 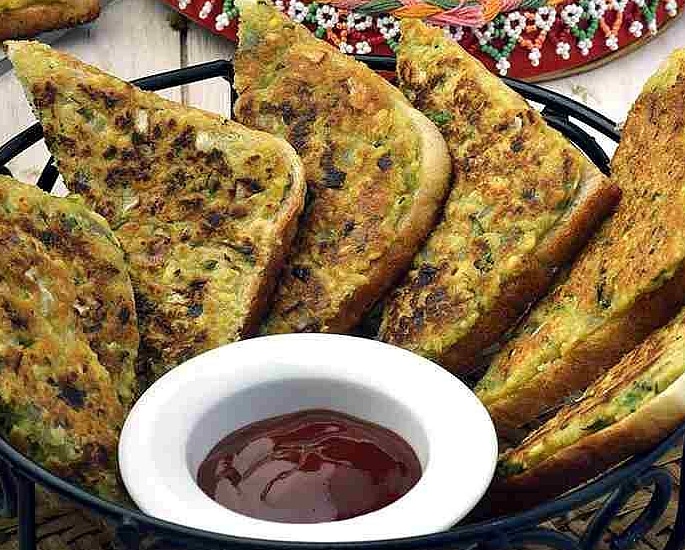 This Desi fried toast is one which you must try especially if you enjoy eating moong daal.

It is an innovative creation, which has a fantastic flavour and a texture, which is bound to be a unique experience for the tastebuds.

The slices of bread are topped with a coarse and thick batter of moong dal. Crunchy vegetables are added along with lemon juice, coriander and green chillies for an intense flavour.

This is an Indian sandwich recipe which may seem strange, but it may become a popular snack option.

This recipe was adapted from Tarla Dalal. 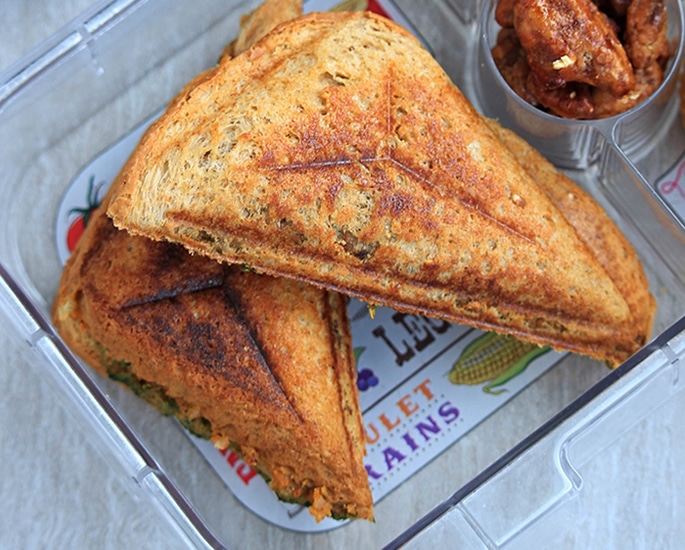 All the flavours compliment each other and the chutney, which is spread on the crispy bread takes it to a new level.

The mixture of vegetables makes it a filling vegetarian option. While it can be made in a sandwich grill, it can also be made on a griddle pan on the stove.

For the Potato Masala

This recipe was inspired by Food Viva. 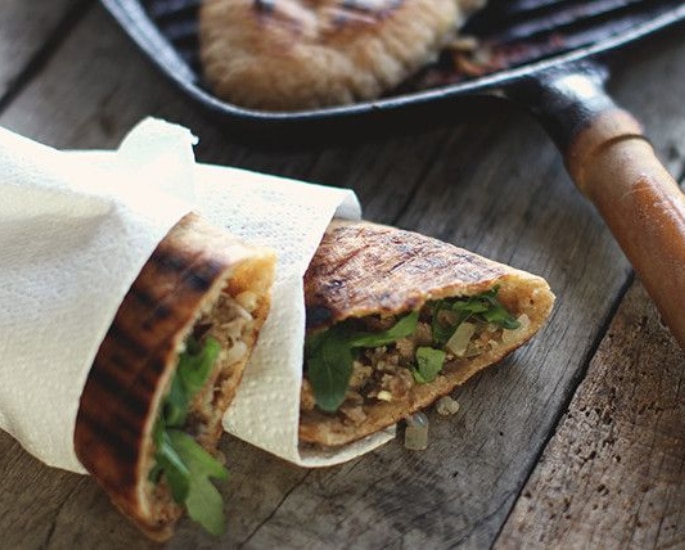 This delicious lamb toastie is an ideal alternative to kebabs as it still uses spiced mince, but it is spread inside pitta bread and toasted on a griddle pan.

When served alongside a salad, the range of textures makes the whole thing irresistible.

When toasted, the pitta bread firms up and becomes crispy while the meat cooks but remains moist and tender.

It is perfect as a lunchtime snack or even as part of an evening meal. 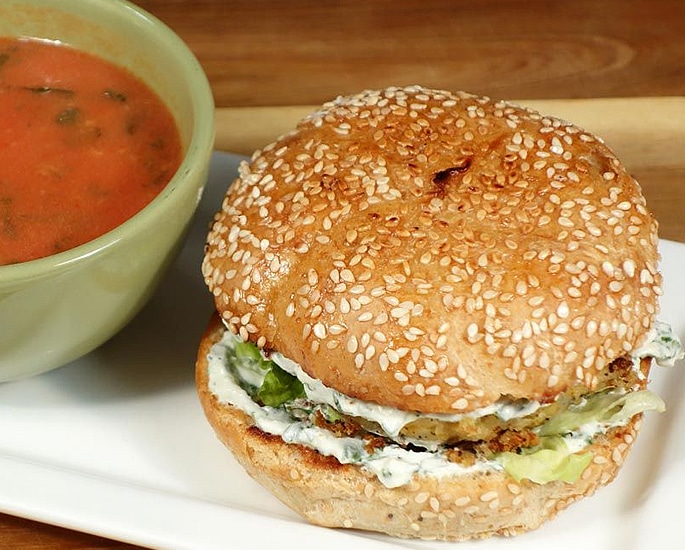 This is a healthy vegetarian sandwich, which uses chickpeas, potatoes and several spices.

It is then placed into a soft bread roll of your choice. The result is a spicy filling which is mellowed out by the bread.

The spinach and yoghurt mix provides a refreshing touch as it cools down the palette after experiencing the intense heat from the chickpea filling.

The yoghurt also has a slight tanginess for even more flavour to the already delicious sandwich.

For the Yoghurt Spread 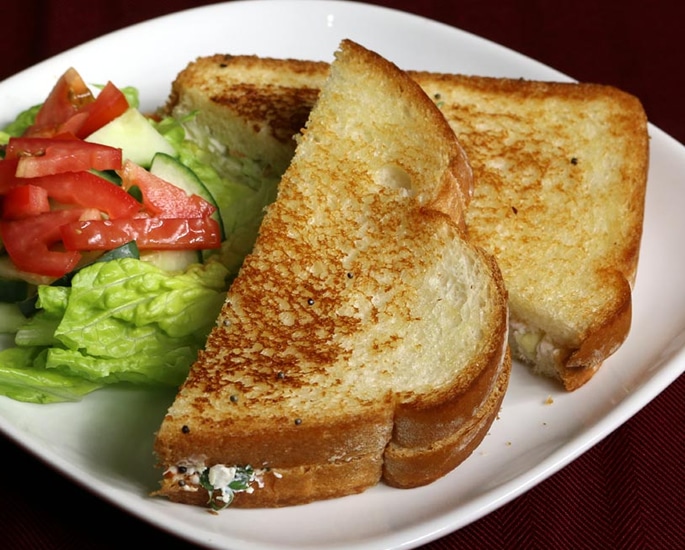 While some sandwich fillings can be heavy, this one is light and perfect as a snack because it has a yoghurt filling.

It is a refreshing snack but it is flavourful as it also has cabbage and carrot. The ginger is also a great addition as it adds a hint of citrus.

People may be sceptical that the yoghurt may cause the bread to go soggy. Therefore, it is essential that firm bread is used to prevent this from happening.

These delicious recipes showcase how versatile a sandwich can be. The fillings incorporate Desi flavours, with some being dishes within Indian cuisine. They are put between two slices of bread.

All of these Indian sandwich fillings have a range of flavours and can be enjoyed at any time of the day.

While these recipes provide a guide, you can modify some of the ingredients for your own personal preference.

When you want to make a sandwich filled with flavour, these delicious fillings are an ideal option to try.