The wellness industry is evolving with a heightened focus on the body positivity movement. We present the top 10 body-positive influencers.

Body-positive attitudes refer to an acceptance of bodies in a positive light, regardless of society’s perception of the ideal size, shape, skin tone, or appearance.

This movement has led to an increase in individuals on social media becoming body-positivity influencers or advocators of body-positive attitudes.

Health brands have also taken on board this attitude, featuring a variety of different bodies in their campaigns and fitness shoots, therefore allowing for a realistic representation of society.

The body positivity movement is a huge breakthrough in acknowledging all bodies, regardless of shape, size, skin texture or complexion. 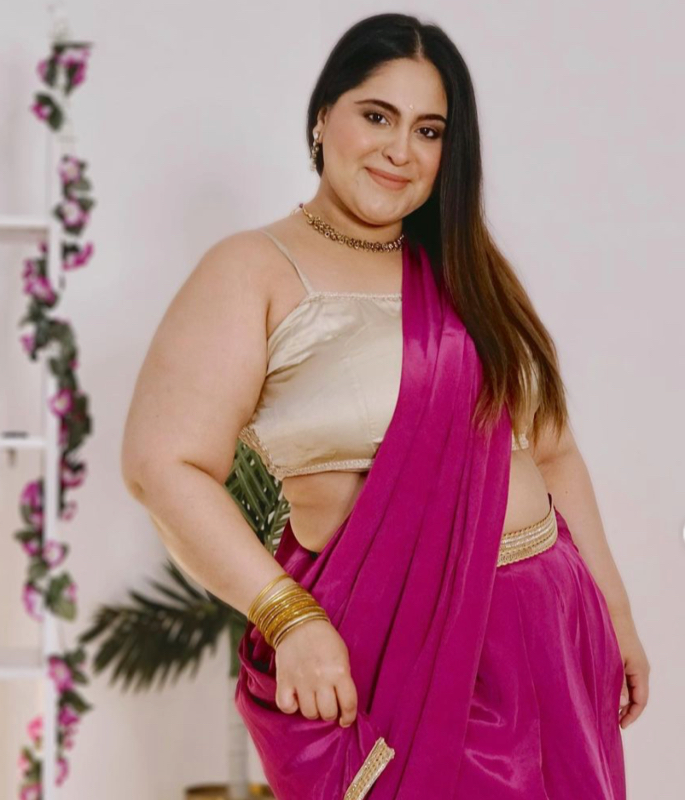 Named Cosmopolitan India’s body-positive influencer of the year in 2020-21, Aashna Bhagwani has amassed over 211k followers on Instagram while promoting body-positive fashion styles.

Her Instagram features various posts of her sporting various looks and offering tips and tricks to her followers regarding how to style certain outfits.

She has also been instrumental in spreading body positivity messages on her platform to propagate self-love and acceptance to her followers.

Whilst her body-positivity work has mainly been on Instagram, she has also been active in working with brands such as Alaya to create an inclusive festive collection with sizes up to 4XL.

On working to create this collection Aashna said it is “designed to make you feel bold, beautiful and confident”.

These three adjectives are certainly translated into her work as a body-positive influencer as a whole. 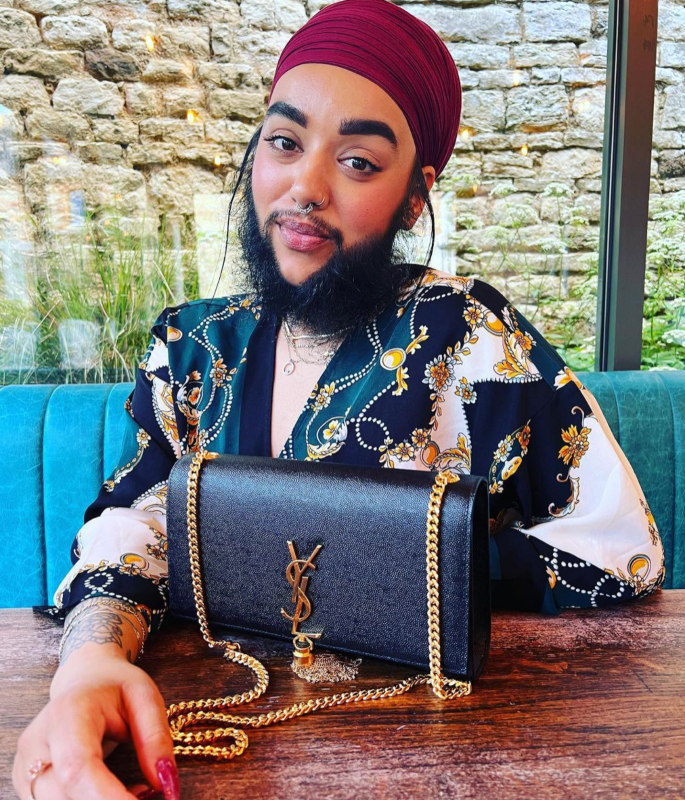 As described on her website, Harnaam Kaur is a “body positivity warrior, motivational speaker, model, world record holder and activist.”

Harnaam has been called ‘the bearded lady’ on social media, due to a condition she has called polycystic ovarian syndrome, also known as PCOS.

Despite PCOS and the bullying she has received online and in person, Harnaam Kaur has become an activist and advocate for the body positivity movement.

Using her platform, Harnaam has learnt to embrace her hair, scars and stretch marks and empowers others to do the same.

Having amassed an incredible social media following of over 190,000 followers across platforms, Harnaam Kaur continues to make waves in the body positivity community. 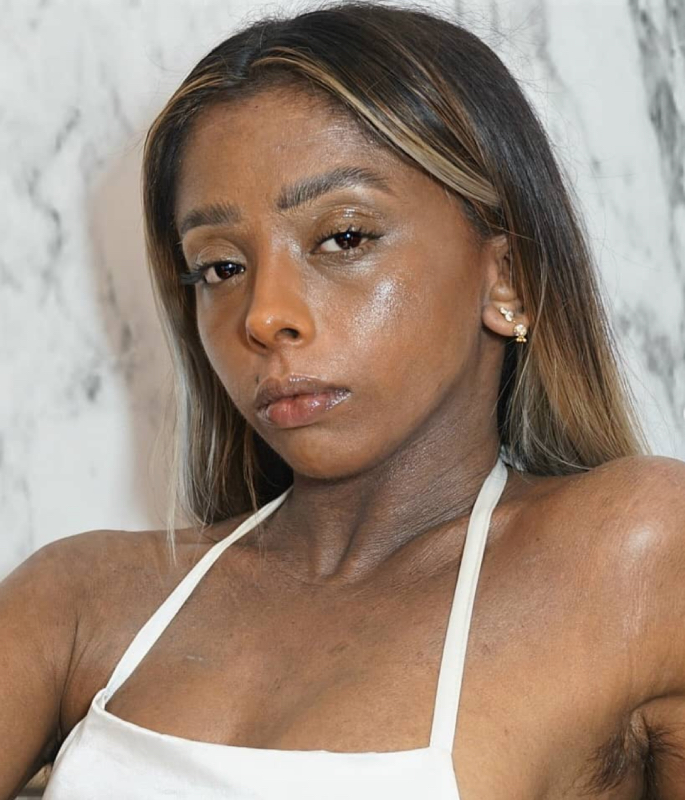 Makeup artist and influencer Karishma Leckraz is best known for her bold and beautiful makeup looks being an inspiration to those with eczema.

Instead of battling with her eczema and topical steroid withdrawal in silence, Karishma speaks out about her condition and has since encouraged others to do the same.

“I hope I can be the light, comfort and representation that I had never had.”

She goes on to say that she hopes to make people aware “that society’s, detrimental, unrealistic, constantly changing ideas of beauty standards is what’s ugly and not you!”

Karishma’s words incite self-acceptance that is core to the body positivity movement as her words not only uplift herself but others who feel underrepresented or shameful over their skin conditions. 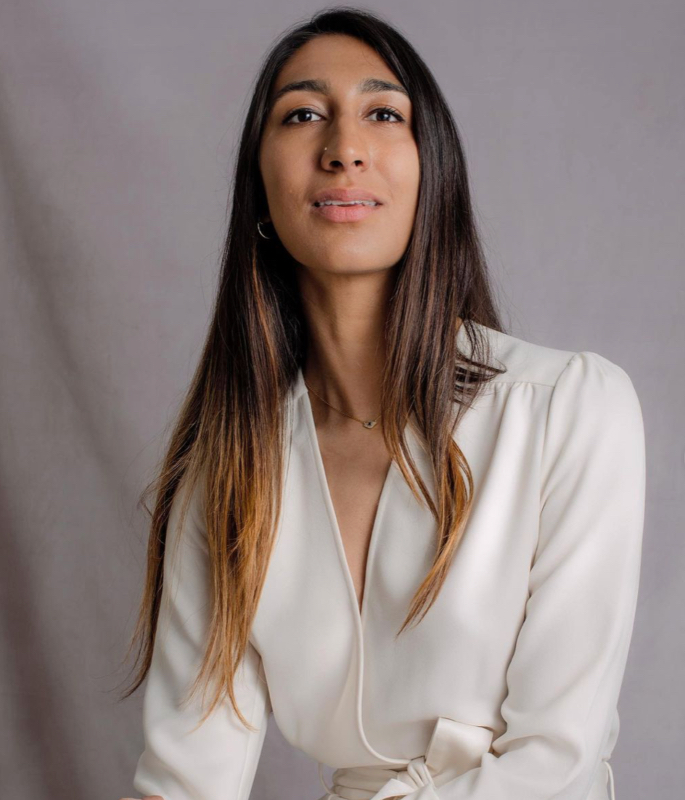 Radhika is a journalist, author and writer who embarked upon the body positivity movement following her struggle with accepting her nose whilst growing up.

Having felt there was a lack of representation and celebration of larger noses in the beauty industry, Radhika created the campaign #SideProfileSelfie.

Whilst larger noses may not seem like such a prominent taboo across society, Radhika certainly feels they have been one of the last few taboos that have not been broken in the beauty industry.

She believes this due to her theory that “beauty standards have lauded small noses over big ones because they fit in with the idea of women being delicate, dainty and not taking up space”. 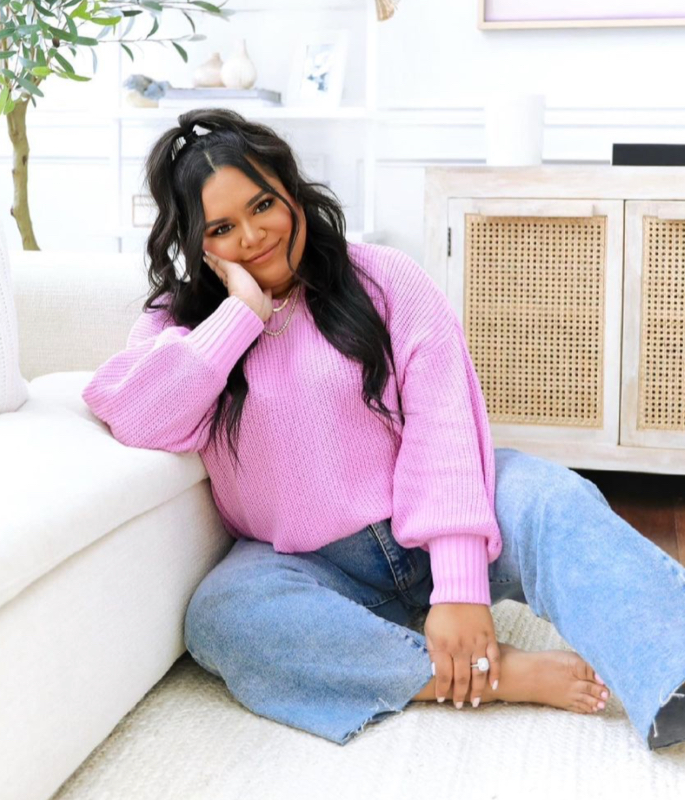 Nabela is well known for spreading love, light and kindness in her social media posts on Instagram and through YouTube videos that engage in self-care practices.

The YouTuber and entrepreneur has gained over 10 million followers across her platforms causing her brand to expand exponentially in recent years.

This exponential growth is evidenced by the release of her book, the launch of her homeware brand and her clothing brand which has a reimagined sizing system to “help women see themselves as more than a size, a tag or a measurement”.

On her website, Nabela says “growing up with little to no Bengali and South Asian representation in entertainment and media, she dreamt of being a part of changing that for future generations”.

Her childhood dreams have come to fruition as she has become a figure of representation for future generations, not only as a body-positive representative but as a South-Asian woman. 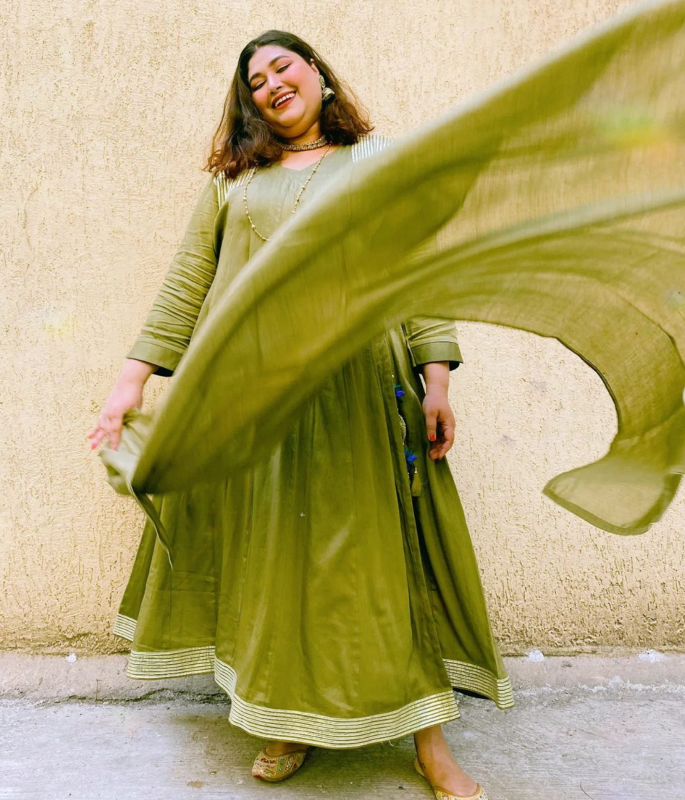 Body-positive influencer and plus-size model Neha Parulkar has used her platform as a model and blogger to advocate for self-love and the body positivity movement.

The diversity of clothing she wears in these photos highlights the multifaceted nature that one can have as a plus-size individual when it comes to fashion.

She also uses her platform to advocate for increased inclusivity for plus-sized women in the Indian fashion industry by highlighting the discrimination in the industry.

Hosting TEDx talks like Body Positivity: The Movement that Changed my Life, Neha has made strides to challenge societal norms surrounding the ‘perfect body’. 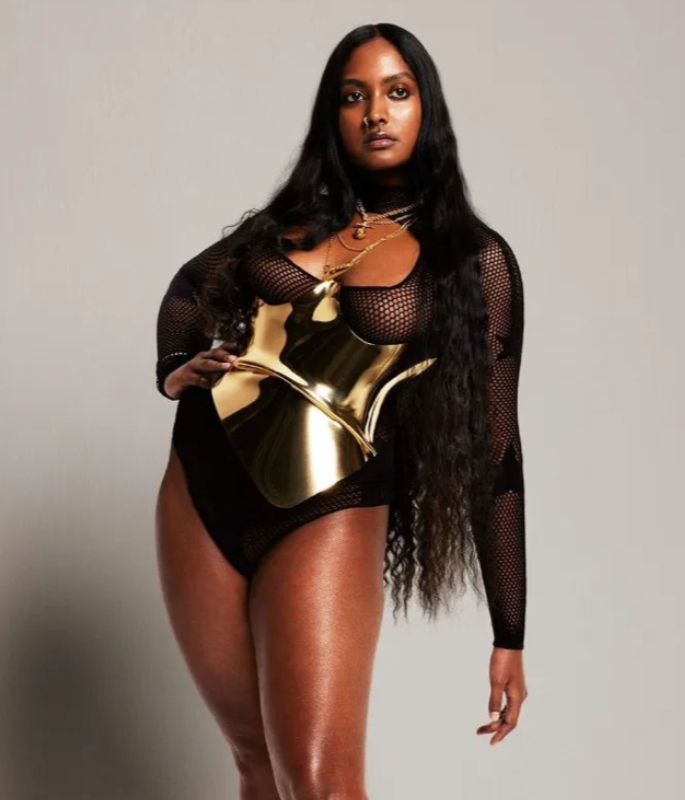 Tamil model, Sheerah Ravindren is also a major advocate of the body positivity movement, focusing on topics such as body hair and colourism.

Sheerah identifies using the pronouns they/she/them/he and has been vocal about their complex relationship with body hair and skin tone in interviews and on Instagram.

Sheerah said that to embark on a body positivity journey and accept their body hair they “had to unlearn and decolonise my mindset”.

Sheerah’s words once again prove how mindset and self-acceptance play a huge role in the body positivity movement and in overcoming societal stigmatisation of South Asian bodies.

Sheerah has also been featured in big productions and covers, including Beyonce’s ‘Brown Skin Girl’ music video and the British Vogue August 2022 cover.

The presence Sheerah has had on camera has been the start of many more exciting things to come, as they are paving the way for increased South-Asian representation. 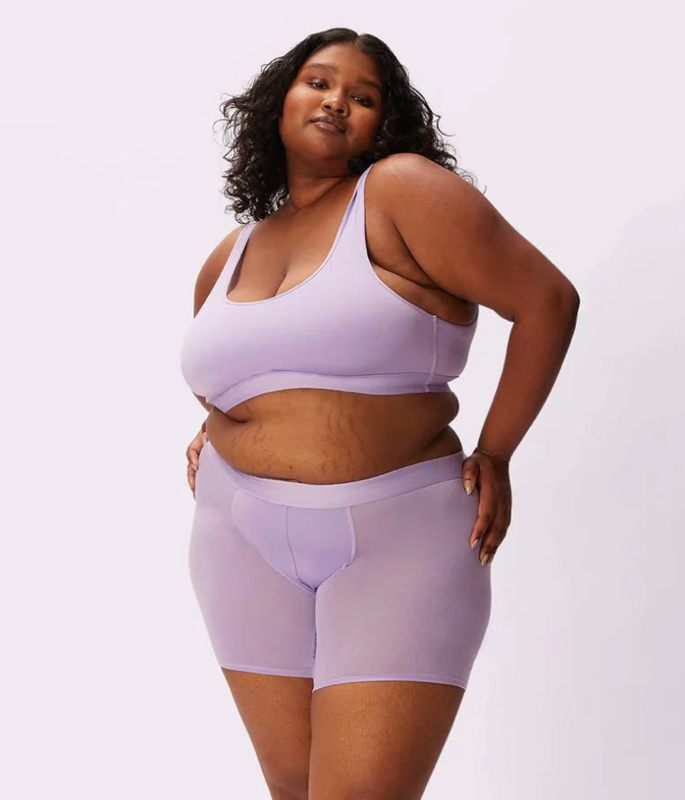 American stylist and model Sarennya Srimugayogam has appeared on the front covers of Vogue, New York magazine and Allure.

As described on her website, Sarennya “disrupts the traditional by reframing femininity and beauty to centre plus-size bodies”.

Her disruption of traditional norms is evidence of her power in pushing back against the stereotypical beauty standards in society.

The modelling and activism work she does advocates against fatphobia and colourism in the South Asian community.

Being on the front cover of such influential magazines indicates how Sarennya’s vision to bring plus-sized bodies into the mainstream has been a success. 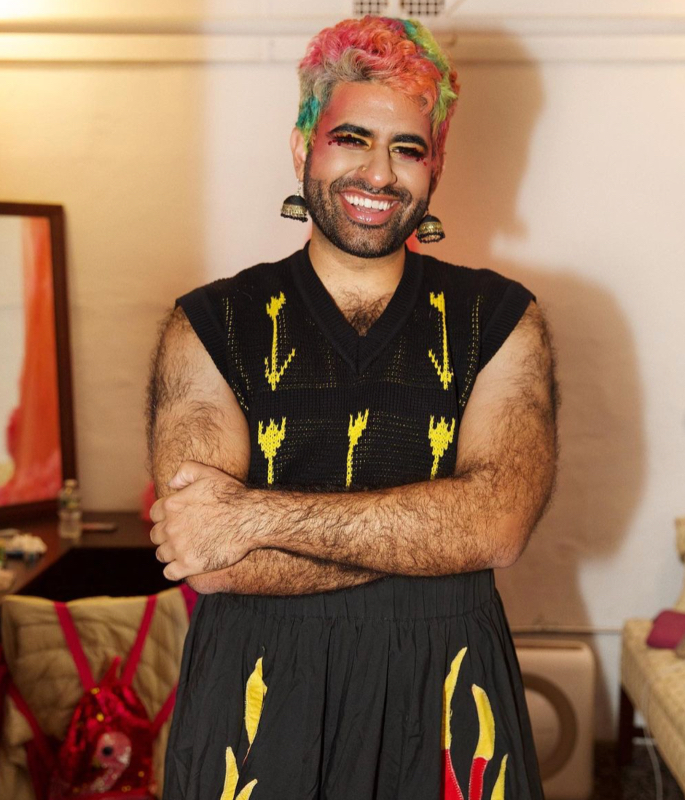 Gender non-conforming author and entertainer, Alok V Menon uses their mixed-media experience, which involves using multiple mediums, to fight for the increased acceptance of all people regardless of gender identity.

Going by the moniker, ALOK has used their platform to focus on various issues facing the bodies of marginalised individuals.

Amongst the various mediums used by ALOK has been the creation of gender-neutral fashion collections.

ALOK has been able to tear down barriers that exclude men from wearing dresses or skirts in their collections.

They have created outfits that degender fashion, allowing for all and everybody to wear their designs so as not to exclude bodies based on gender, shape, or size. 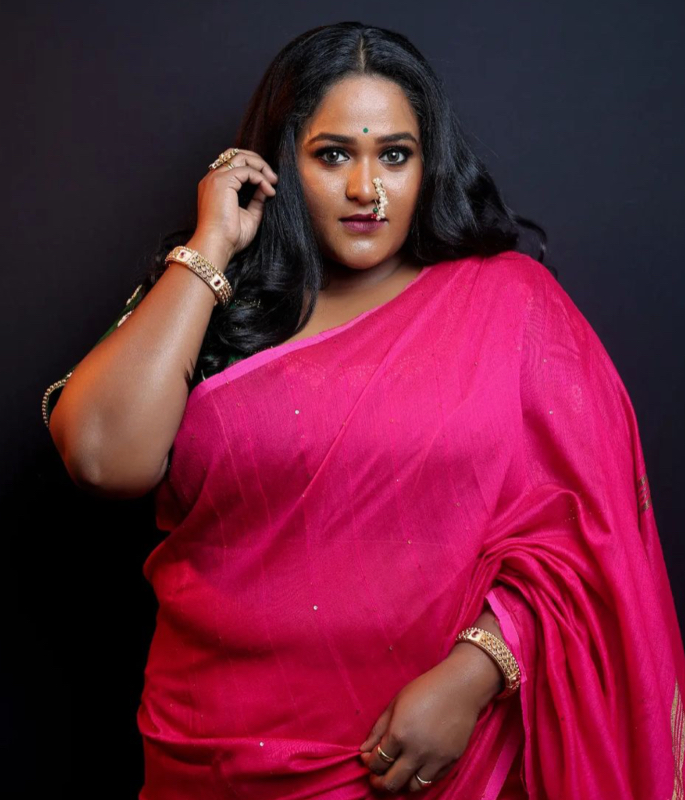 Popular Marathi film star and theatre actress, Vanita Kharat has been well known as an advocate of the body positivity movement, featuring in movies and campaigns.

The actress was also featured in a recent body-positivity photoshoot, whereby she posed nude with confidence and flair.

The photo shoot featured Vanita posing nude, covered by a blue kite and styled with her naturally curly hair which was left loose and flowing.

With over 90.9k followers, Vanita’s body positivity photoshoot had immediately gone viral with netizens commenting “Such courage inspires people” in admiration of her.

Her confidence, courage and pride in her appearance have left netizens in awe and adoration of her, showing that they too can be proud of their bodies.

These influencers are proof of the powerful impact of positive body imagery on social media.

By amassing tons of followers globally, body-positive influencers like the ones above have been able to relay important messages regarding self-love, self-acceptance, and representation in the Desi community.

Let us hope that their work continues to receive such great reception and support across society.

Tiyanna is an English Language and Literature student with a passion for travel and literature. Her motto is ‘My mission in life is not merely to survive, but to thrive;’ by Maya Angelou.
Faryal Makhdoom launches Make-Up Business
Therapy Techniques to Help your Relationship