Women in India are starting to become more familiar with sex products, and female entrepreneurs are leading the way for women’s pleasure.

“India is going through a sexual revolution."

Women in India are beginning to take more control of their sex lives with the growing trend of sex products targeting them.

The appearance of women in the sex toy industry especially in India, is changing societal views on women’s sex products.

Indian women who previously would be shunned for such behaviour, are today getting more aware of the uses of sex products, for their own pleasure or in a relationship.

As the acceptance is increasing so is the trend of more women entrepreneurs in the country aiming to provide Indian women with sex products to meet their exact needs.

Divya Chauhan is one of these incredibly influential women. She founded the website Itspleazure.com, which sells products such as full of edible lingerie, role play costumes and flavoured condoms. 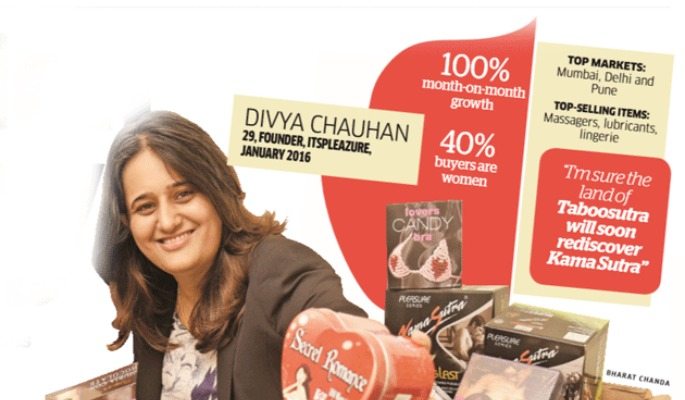 Chauhan claims “40% of my buyers are women” and top cities buying products from her website are Delhi, Pune and Mumbai.

With the growing number of women buying sex products, the industry of sexual wellness products is increasing in India.

“Indian women are more independent now and feel that sexual pleasure is their right too. So, sex products are something that can help them learn more about themselves and their desires too.”

“It is high time we stopped treating sexual pleasure as a one-sided affair reserved for men.”

Ute Pauline Wiemer confounded the Bengaluru-based LoveTreats. Wiemer is originally from Germany and came to India in 2013. Her motivations for LoveTreats came because of the lack of female perspective to the Indian sexual wellness industry.

Wiemer says: “What is clearly missing is the female perspective on sexuality and intimacy.”

Many of the products in the sexual wellness industry are aimed at men. Things such as gels and creams are aimed towards women but are not for pleasure, rather for men’s pleasure. Wiemer hopes to change this by introducing women to products specifically for them.

The website offers advice and a way for women to talk about their sexual experiences.

Wiemer says: “India is going through a sexual revolution.” This revolution is driven by the women in India, especially by the millennials, affluent professionals and middle classes.

The website even allows people to buy products in discreet fashion, so women do not need to feel embarrassed.

Samir Saraiya is the founder of ThatsPersonal. He is not surprised that female entrepreneurs are starting to dominate the sexual wellness industry previously dominated by men.

Women take up 41% of ThatsPersonal’s buyers and outnumber men in places like Baroda and Pune.

In a survey by ThatsPersonal, 59% of women wanted to know about upcoming products. 41% of women giving feedback even offered product suggestions.

This means that women are more confident and know what they want.

Saraiya says: “Women are not just becoming bolder and more confident but even inquisitive about new products.”

Raj Armani, the founder of IMbesharam, bases his company of the presence of women within the industry. He says: “Our India operation is headed by a woman, Sonica Kohly.”

In addition, 38% of their buyers are women. Compared with when the site started in 2013, where the number of women buyers was just a mere 13%.

Armani notes that a change has taken place in India since then. Young people are becoming more open and aware of their sexuality and the sex product industry is helping them explore it.

Although still seen as taboo by many Indians, sex and relationships are completely natural and since India is home to the Kama Sutra, sexual pleasure is not something new to the country.

Amongst the growing number of popular sex products are flavoured condoms.

Ranju Mohan, director of JK Ansell has seen a rise in flavoured condom demands. In 2015, figures from Nielsan MAT reveal that 17.8 lakh flavoured condoms sold in the year.

Women in India are thankful to the vast array of female entrepreneurs participating in the Indian sex products market. The emergence of these women is helping to shift the otherwise negative attitudes of women using sex products.

“I think it is really cool that we Indian women are now experimenting much more than the past. Now, we can easily choose and buy sex products online without having to go into a store. Which is great!”

With women such as Divya Chauhan opening up a new world of sexual excitement to Indian women, the sex products industry is bound to yield major growth in the future.

Whilst searching and collecting sex products may still have to be very discreet  – women in India are embracing their sexualities and learning that sex products can be used to enhance sexual fun and pleasure.

Alima is a free-spirited writer, aspiring novelist and insanely weird Lewis Hamilton fan. She's a Shakespeare enthusiast, with a view: "If it were easy, everyone would do it." (Loki)
Rising Issue of Self-Harm among South Asian Women
Can a Desi Woman easily Marry a Guy with a Sexual Past?