A fraudster who faces a £2.2 million confiscation order fled to the United Arab Emirates (UAE) where he currently lives a lavish lifestyle.

"a life of luxury they neither earned nor deserved."

A wanted fraudster who fled to the United Arab Emirates (UAE) continues to live a lavish lifestyle.

Ardip Singh Hayre was sentenced in 2011 for a failed plot to steal £17 million in a “missing trader” VAT scam centring on the mobile phone industry.

The fraudsters behind the multimillion-pound operation manipulated the VAT system by pretending to import and export phone products.

But the goods never existed and the paperwork used to demonstrate trading was created by a sophisticated computer program devised specifically for these illegal purposes.

Listed as the director of the exporting firm, Hayre was sentenced to two years and 10 months after pleading guilty to conspiracy to cheat the public revenue.

He was also disqualified from being a company director for four years after he used his Birmingham-based business, Goldfree Ltd, to defraud HMRC.

Hayre’s father Mandish Singh Hayre, was also jailed for 15 months for his role.

Mandish laundered more than £600,000 of criminal proceeds through bank accounts in the UK and abroad.

He was previously ordered to repay £172,000 within six months or serve an additional two and a half years.

Through the fraud, the gang made millions and used the cash to fund luxury lifestyles.

Investigations discovered the high-value items purchased, including several UK properties worth over £1 million each, a Spanish property valued at over £1 million and performance cars including a £250,000 Rolls Royce Phantom and a £165,000 Ferrari.

In 2013, Hayre was ordered to pay back £2.2 million within six months or face an extra seven years in prison.

Speaking at the time of the order, Dave Cowie, Assistant Director of Criminal Investigation for HMRC, said:

“This gang stole vast amounts of money to fund a life of luxury they neither earned nor deserved.

“We are determined they do not leave jail to enjoy that lifestyle again and have restrained a number of high-value assets.

There are several properties in the UK, Florida, Spain worth over £1 million each, and proceeds from the sale of high-performance cars, including a £250,000 Rolls Royce Phantom and a £165,000 Ferrari.

“HMRC works tirelessly to identify and recover profits from crime.

“If these criminals do not pay up, they will serve extra time in jail, and still owe the money when they are released.”

But in the following year, Hayre fled to the UAE and still remains wanted by HMRC.

It is believed that he lives in a luxury villa worth approximately £1.5 million, in an “exclusive” complex with two drivers and a maid. 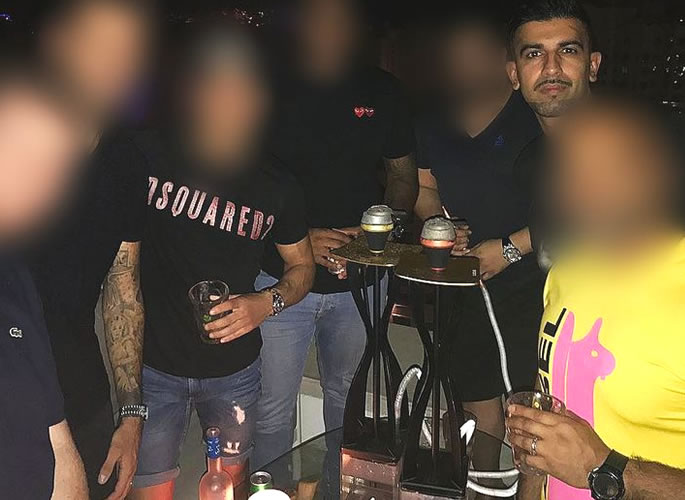 According to Birmingham Mail, Hayre moved to a villa in the Arabian Ranches complex, a quiet gated collection of homes that brands itself a “beautifully designed community”.

The properties are set in a “very private and well-established community”, with some homes featuring private pools and lush gardens.

Before moving there in 2020, Hayre lived in Sienna Lakes, where four to six-bedroom villas are set in Jumeirah Golf Estates.

Hayre is now the executive director of a boxing club in Dubai.

He is said to avoid photos and social media due to his wanted status.

But one Instagram image from 2018 shows him posing with a group at the penthouse bar of the “hottest hotel in Dubai”, the Five Palm Jumeirah.

At the time of the gang’s conviction, Gary Lampon, Assistant Director of Criminal Investigation for HMRC said:

“They used the money to fund extravagant lifestyles at the expense of the British taxpayer.

“Missing trader fraud is not merely a paper fraud, it funds other serious crime and we are determined to pursue and bring to justice the criminals behind this type of fraud.”

Dhiren is a journalism graduate with a passion for gaming, watching films and sports. He also enjoys cooking from time to time. His motto is to “Live life one day at a time.”
Student pitches outside Canary Wharf for Internship
Amir Khan throwing Cash at Qawwali Night annoys Netizens