Violent Stick Fight erupts with Women and Men in Pakistan

A video of a very vicious fight with the use of sticks by men and women in a Pakistani village has surfaced. The footage shows extreme levels of violence.

A video has emerged on social media which shows a very violent fight taking place with dandhas (sticks) in a street of a Pakistani village.

The fight shows a number of people engaged in the fight including women who are not holding back with their vicious streaks of violence by using the wooden weapons.

Reports say the altercation is taking place in a village of the Lahore area of Pakistan.

Screams and swearing are heard as the battle between the parties move up and down a gali (street) of the village.

Whilst the exact reason for the fight still remains unclear what is very apparent is that the level of violence is extremely horrific and detrimental to those receiving the blows.

Women armed with the sticks are seen striking men and vice-versa.

The violence is clearly about a serious matter which has erupted in this remote village in Pakistan.

A woman in purple traditional salwar kameez is seen having a one-to-one fight using her stick against a man dressed in brown. They are both fighting to harm one another with complete disregard for each other being a man or woman.

She strikes blows at him while he replies with similar clashes back onto her stick. Other small groups of fighters are seen in similar combat using the sticks. 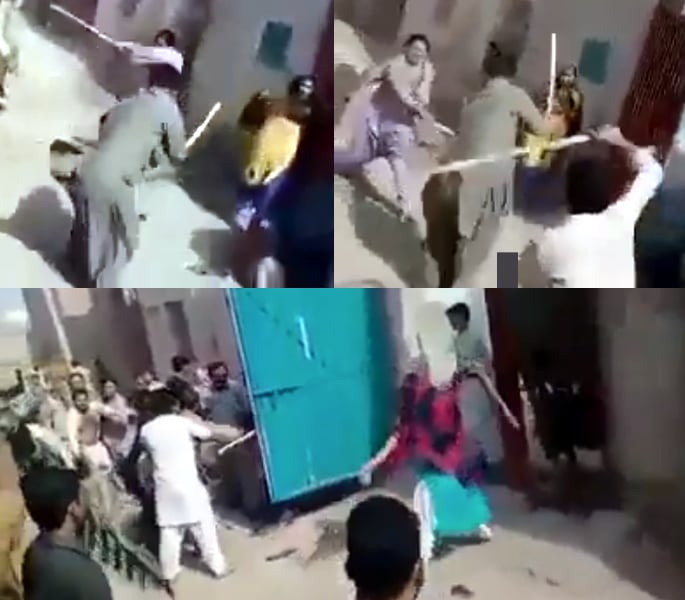 The frantic video shot by an onlooker shows the severity of violence taking place with screams and shouting being heard from the women and the men involved.

However, no one is listening as the fight escalates towards the front cyan painted door of a house in the village street.

Women are then seen running in and out of the house with screams filling the air.

Men are heard saying “save them from this [fighting]”.

A woman in a cyan and white salwar kameez and purple dupatta is then heard shouting “I will be the one to kill you,” as she uses a stick to strike the ground trying to scare anyone coming towards her.

She then throws her stick at a wall opposite her. Then the doors of the house close which are painted magenta on the outside and re-open.

Next, a woman appears out of the house carrying a tawa (a heavy metal utensil used to cook chappatis on) and she starts to use this as a weapon hitting a man and others with it, who are trying to stop the fight.

There is utter chaos around this village street with mini fights still taking place between men and women.

The tawa is grabbed from her to stop her from hurting others. At this point on man is accosted and held by a few men and women and shouts of “let him go” are being heard.

This man who seems to be a central character to the argument and fight is then grabbed and held by a crowd of people, who do not want him to escape.

The video highlights this man at the end as someone who could be responsible for the occurrence of this very violent and shocking stick fight.

Watch the video of the shocking stick fight:

Amit enjoys creative challenges and uses writing as a tool for revelation. He has major interest in news, current affairs, trends and cinema. He likes the quote: "Nothing in fine print is ever good news."
Indian Man used Shaadi.com to Dupe & Rape Woman
Teenager Quit HMRC Job to be Drug Dealer for “Easy Money”