The son of Binod Chaudhary has married in a luxury Indian wedding. Taking place over three days, check out all the details and stunning pictures here.

The first day of the event witnessed a sophisticated cocktail dinner, a luxurious black-tie occasion.

The son of Nepalese businessman Binod Chaudhary has married in a luxury Indian wedding.

While the marriage took place in April 2017, pictures have now been released, showing the joyful occasion that spanned three days.

With Salman Khan and Sri Lanka’s Prime Minister in attendance, they first celebrated in magnificent hotels in Udaipur. The wedding ceremony itself took place in Jaipur.

The first day of the event witnessed a sophisticated cocktail dinner, a luxurious black-tie occasion. After a delicious meal, the guests were treated to a harmonious performance by the Shillong Choir.

They sang some well-known songs to create a sublime, romantic atmosphere.

Following on from this, Day Two marked the traditional sangeet and mehendi ceremonies. Surrounded by family and friends, the couple took centre-stage of the celebrations. With a fun, lively setting, they danced the day away with impressive moves.

Had a wonderful time with varun and anushree . Wishing you both a happy married life.

Continuing into the evening, Varun and Anushree completed the mudda and tikka ceremonies. With this marked the arrival of famous guests and a performance created by choreographer Shiamak Davar.

Featuring singers Mika Singh and Kanika Kapoor, they delivered an exciting show and even posed for pictures with the happy couple.

The final day of the celebrations marked the actual wedding ceremony. With roughly over a thousand guests in attendance, the luxury Indian wedding was the place to be. Many politicians, actors and fashion designers graced the guest list. 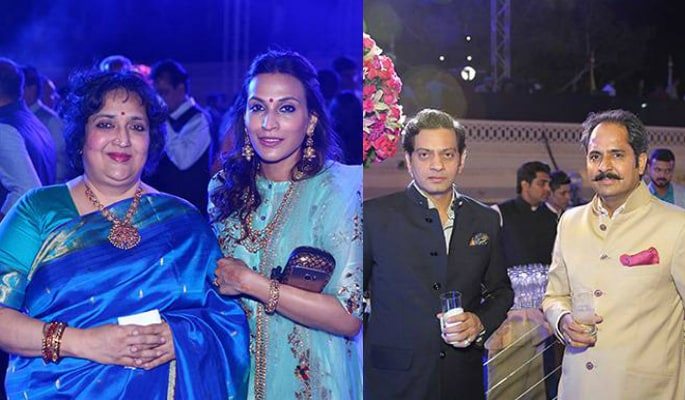 The venue created a romantic atmosphere as it was tinted red, with decorations making it appear as an island. Guests even had to take a ferry to travel to the ceremony.

The couple themselves looked utterly immaculate and flawless. Anushree dressed in a traditional red lehenga with beautiful pieces of jewellery. Meanwhile, Varun looked handsome and stylish in his groom attire.

Some of the famous guests also posted images of the newly-wedded couple:

Bollywood actor Salman Khan made a fleeting appearance at the luxury Indian wedding. He came to wish the couple congratulations on their new marriage. However, many appeared more interested in taking photos of the acting legend.

However, he could only visit the couple for a few moments. After a quick meet-and-greet, the celebrity had to leave with the help of a few bodyguards.

After the wedding, guests sampled delicious meals made by chef Ritu Dalmia. From vegetarian options to beautifully designed food stations, the celebrity chef created a spectacular menu to cater for the staggering amount of guests.

And now with the event now over, it seems Varun continues to reveal more highlights from the wedding. On social media, he revealed how Indian Prime Minister Narendra Modi sent the couple an official letter, wishing them congratulations.

With famous guests and a captivating three-day event, Varun and Anushree’s wedding was truly a magnificent sight to behold.

DESIblitz wishes the happy couple congratulations on their stunning wedding.