A large group of people danced on the streets of New York as part of a wedding procession. It was so large that it shut down Broadway.

"We shut down Broadway for my brother's wedding."

A video has gone viral, showing a massive wedding procession on the streets of New York.

The group of revellers was so big, it shut down Broadway.

The video was shared by Suraj Patel, a former candidate for US Congress. He revealed that he was celebrating his brother’s wedding.

Suraj was dressed in a white sherwani and pink turban.

He was seen with dozens of family members and friends, many of whom were also wearing pink turbans.

The massive wedding procession danced to upbeat Indian tracks as they made their way along Broadway.

Suraj also danced with the newlyweds during the procession.

In the video, Suraj revealed that Broadway was shut down for the wedding.

He wrote: “We shut down Broadway for my brother’s wedding.”

In the caption, Suraj wrote: “My heart is so full, for my family to have all been here for such an incredible occasion for my brother’s wedding, so much love and energy on the streets of NYC.”

Suraj shared another post, featuring an ice cream van and the groom riding a horse on the streets of New York.

The caption read: “The ice cream truck is back!

“My brother, my best friend, is getting married and we shut down Broadway, and we danced like Desi rockstars!”

The big fat wedding went viral and led to an array of comments.

Some loved the wedding celebrations, with one person saying:

A third commented: “So much love to your family!!” 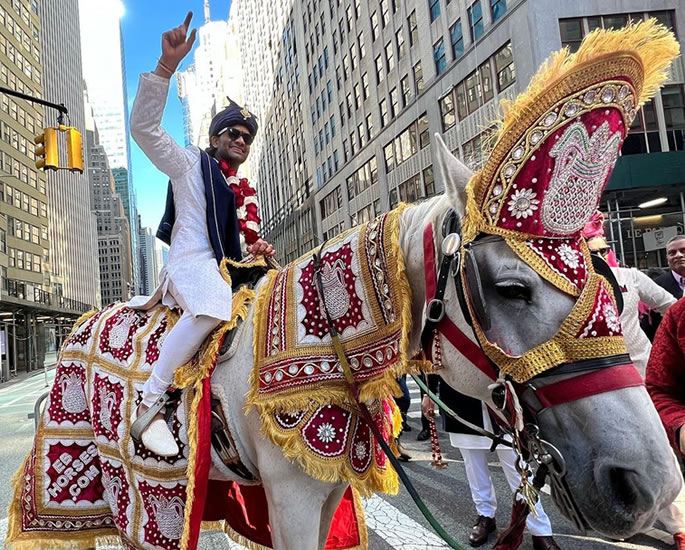 However, some people were annoyed at the fact that a large public area was shut down for a personal event.

“Why are you allowed to shut down Broadway for a personal event? Isn’t this a grave inconvenience to residents?”

Another user wrote: “So many other places to do a Baraat. Highly irresponsible of you. I’ve had some massive family Baraat’s and we never shut traffic out like this.”

Others criticised Suraj for seemingly bragging that he shut down Broadway.

A user said: “The ‘Shutdown’ caption did more harm to this post than the actual event itself.”

One person commented: “Meanwhile the patient waiting in an ambulance, the kid being late for exams and people being late to work.

“Must feel good to encroach public property and deny equal access to all. Always need that special treatment by pulling strings. Classic.”

A comment read: “What an idiotic post. Are you happy because of the marriage or because you were able to shut Broadway?”

Dhiren is a journalism graduate with a passion for gaming, watching films and sports. He also enjoys cooking from time to time. His motto is to “Live life one day at a time.”
Suella Braverman quits as UK Home Secretary
Liz Truss resigns as Shortest-Serving Prime Minister