A Uruguayan diplomat was caught ignoring the lockdown rules in India. Police in Delhi stopped the woman who had been cycling.

"I can show you. We didn’t receive anything!”

India remains under lockdown, however, some people continue to flout the rules and this includes a Uruguayan diplomat.

A number of diplomats based in Delhi have been blatantly ignoring the lockdown rules by not wearing masks, something which was made mandatory by the authorities.

On Saturday, April 11, 2020, a diplomat from the Uruguay Embassy was caught cycling in Vasant Vihar, an area where many embassies are located and where many diplomats live.

The woman was identified as Ana Valentina Obispo, the Head of Administration at the Uruguay Embassy.

She was stopped by police after they received complaints from the Resident Welfare Association (RWA) of some foreigners ignoring the lockdown guidelines.

After being stopped, Obispo got into an argument with the officers, claiming that she was not aware of the guidelines issued by the Indian government.

The police officer told her: “Our MEA has already issued the mandate and you are not following it.”

Officer: “But, you have to follow the mandate of the government. You are not following the lockdown directive given by the honourable PM of India.”

Obispo: “Your honourable PM is very honourable, but we didn’t receive anything at the embassy.”

Officer: “You are not obeying the laws and the need of the time.”

The police then asked Obispo which embassy she belonged to. At that point, she rode off and said:

“You can’t say anything to me. You can’t ask me to wear a mask.”

According to the on-duty officers, Obispo refused to show her identity card.

The Delhi Police is set to send an official complaint to the Uruguay Embassy regarding Obispo ignoring the lockdown orders as well as the mandatory requirement of wearing a mask.

They will also write to the Ministry of External Affairs (MEA) about the diplomat’s behaviour and her claims that the embassy did not receive any guideline from the ministry.

However, according to the sources, the MEA has been frequently sending regular advisories to foreign missions about the lockdown and emphasising that they need to stay indoors.

The MEA later clarified that the ministry had issued limited curfew passes to the diplomatic community. It advised the diplomats to adhere to lockdown guidelines.

Sources in the ministry said: “The MEA has regularly issued advisories for embassies and its personnel to strictly follow lockdown guidelines.

“We have issued a very limited number of curfew passes for essential work.

“We will continue to advise the diplomatic community to adhere to the lockdown guidelines as it is in their interest and well being of each and everyone.”

Watch the Exchange between Officers & the Uruguayan Diplomat 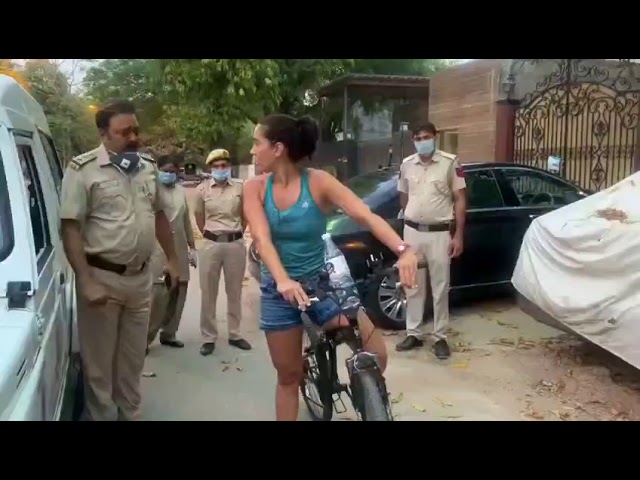 Dhiren is a journalism graduate with a passion for gaming, watching films and sports. He also enjoys cooking from time to time. His motto is to “Live life one day at a time.”
UK Asian Businesses reveal the Impact of COVID-19
Indian Husband beats Wife & Mother due to Face Mask