A travel blogger has been accused of faking her photos on Instagram. She has attempted to defend herself, by releasing her image principles.

Others pointed out how the Indian landmark had no tourists, particularly where Amelia Liana poses.

A travel blogger has received massive criticism over her photos depicting her visits across the world. Many of her followers on Instagram have accused her of creating fake photos.

In particular, they have accused the social media star, Amelia Liana, of Photoshopping her photos.

The accusations began after many followers noticed confusing features on many of her images on Instagram.

For example, back in April 2017, the travel blogger shared various images of her journey in India. One of which depicted the Taj Mahal.

However, many pointed out several inaccuracies in the image. At the time, the building had undergone some maintenance work, meaning it had scaffold by one of its towers. But, one follower noticed this missing feature on the Taj Mahal and commented:

“When the current scaffolding around the right tower is not there.”

In addition, others pointed out how the Indian landmark had no tourists, particularly around the spot where Amelia Liana poses. Usually, the Taj Mahal will attract huge numbers of visitors daily. Which means it seems extremely unusual that Amelia managed to find a quiet day for an image.

Lastly, followers also explained how the pool reveals further inaccuracies. The travel blogger’s shadow cuts off abruptly as it reaches the pool. Also, the attraction’s reflection seems to have become compressed. 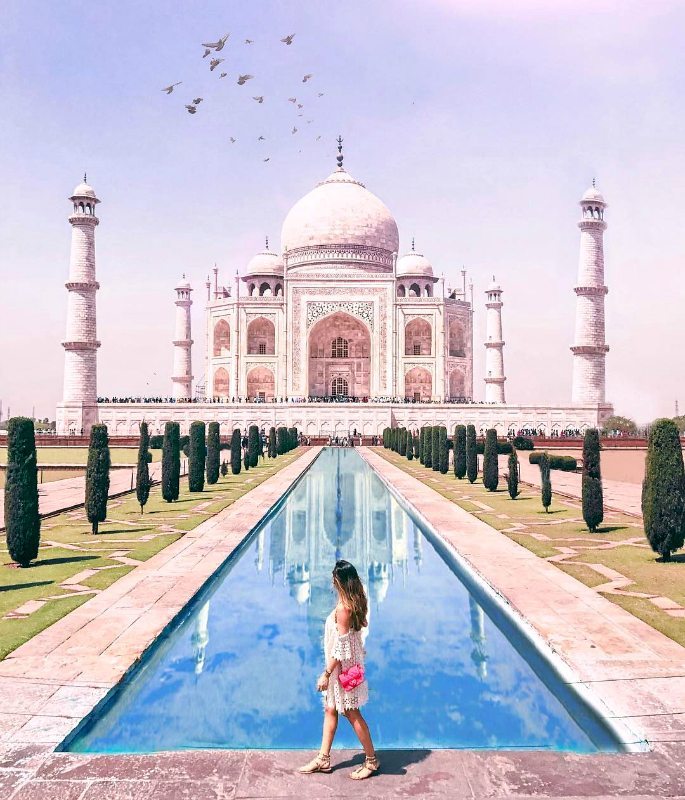 Followers have also criticised Amelia Liana for another picture – one taken at the Rockefeller Centre in New York. She posted it on 25th May 2017, but the travel blogger has since deleted the photo.

This hasn’t stopped many reposting the image on Twitter to pinpoint its faults. For example, the image shows Amelia looking out at the New York skyline. But the Freedom Tower, built in 2013, does not appear anywhere.

In addition, some have also pointed out how her reflection on the window seems mismatched. The image shows the window reflecting the back of her hand, rather than her palm. The Times even released an analysis of the photo, where they suggest Amelia Liana had superimposed an image of herself onto an older image.

How did the window reflect the back of Amelia Liana's arm exactly? Some dodgy af photoshopping going on there ??? pic.twitter.com/OqXS01dE7W

Defending her Instagram images, Amelia explained how she aims for “authenticity as well as giving you imagery that is stylish, progressive and inspiring”. She also explained that a lot of planning and thought goes into each image.

However, followers continue to slate the star and criticised her principles, claiming she is “promoting a lifestyle which is fiction”.

One can argue that this type of accusations is understandable, as fans of bloggers expect them to be truthful. While they only blog, they can still carry a level of power, where many readers and viewers expect them to present the truth. This is why they follow them.

But with this level of deceit, it raises the question of which bloggers do these tactics? Travel has become a popular topic in the blogging community. But it does come with difficulties, such as expenses.

This can leave one wondering, are they just travelling on their computer, making fools out of their fans?

Now many will wait to see whether Amelia Liana will respond to the new wave of criticism, after her blog post.