Too fat for Air India

A dramatical ruling from an Indian high court has agreed with Air India for ‘controlling’ the weight of their air hostesses. Further to five Air India hostesses filing a case against Air India for not letting them fly due to their weight, the court in Delhi made the ruling that it was acceptable for Air […]

Air crew have to be athletic to deal with any emergency

A dramatical ruling from an Indian high court has agreed with Air India for ‘controlling’ the weight of their air hostesses.

Further to five Air India hostesses filing a case against Air India for not letting them fly due to their weight, the court in Delhi made the ruling that it was acceptable for Air India to not allow air hostesses over a certain weight, to fly with the airline.

The hostesses were reported as being 3kg over their maximum weight allowance and were suspended by Air India. Limits based on height and age were brought in by the airline two years ago to combat weight problems amongst staff. The rules state that an 18-year-old with a height of 5ft (1.52m), the maximum weight is nearly 8 stones (50kg) and for the same height but in the 26 to 30 age group, the weight limit is nearly 9 stones (56kg).

Air India presented their case to the court by claiming that the weight of the hostesses was a health and safety hazard. Especially, on an airline where space is limited and customers expecting a high-level of service, unfit personnel would prove to be a major drawback. Also, the airline added that in a very competitive industry, it was very important for them to ensure their staff maintained a certain appearance and physical well-being.

Lawyers in defence of the hostesses argued that there is no connection between performance and weight. They stated that the specific staff were perfectly able to carry out their duties and declared the suspension as illegal and arbitrary.

In the judgment made by the High Court, it stated that duties performed by air hostess staff were “strenuous” and therefore, physical fitness was of primary concern. It said “Air crew have to be athletic to deal with any emergency and for that have to be in good shape. That is the reason that not only maximum but minimum weight limits are prescribed.” 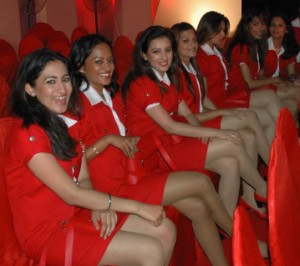 Another factor affecting Air India is that it still primarily maintains the dress-code of sarees for its air hostesses. This traditional approach is now facing more and more competition from other airlines who are adopting a more western dress-sense of skirts, trouser-suits plus younger and more glamorous staff.

Many feel this action by Air India is in response to budget airlines operating in India, such as Kingfisher Airlines owned by beer tycoon, Vijay Mallya. Kingfisher provides the services of young, red uniformed, mini-skirted air hostesses in scarlet heels.

For example, a post for a ‘Flight Attendant/Cabin Crew (Job Code – FA)’ with Kingfisher Airlines, requires applicants to conform to the following particulars:

Showing how specific Kingfisher’s policy is to employ a particular look, style and appearance of air hostess staff. Apparently, Mr Mallya is known to be closely involved in the selection process and refers to his air hostesses as “walking models in the air.”

The acknowledgment of the court has therefore highlighted the advent of aviation in India, which now desires a 21st century appearance of cabin crew compared to the traditional look and styles of the past, and especially, indicates that women need to have a fit and slimmer appearance to survive in this industry.

Amit enjoys creative challenges and uses writing as a tool for revelation. He has major interest in news, current affairs, trends and cinema. He likes the quote: "Nothing in fine print is ever good news."
Make-Up for Asian Eyes
Flab to Fab: From Fat to Fit!