Samit Patel the Leicester born British Asian talented cricketer has lost his chance of joining the England team at this years World Cup. Simply because he is overweight and not fit enough to be part of the squad says coach, Andy Flower.

"I think Samit's let himself down"

Nottinghamshire’s left-arm spinner and talented batsman Samit Patel has been left out of the England cricket team which will play at the Cricket World Cup in India.

England’s coach Andy Flower wanted Patel to get into shape to make the team but he has not made the effort to attain the fitness required. Flower said: “Samit was chosen in the provisional 30-man squad because he is the type of player who would be very useful on the sub-continent, but it was on condition that he improved his physical state for him to be in contention.”

On the lack of effort and apathy by Patel, Flower said: “It’s very frustrating but only the individual is responsible. He had a very recent fitness test and it was clear he hadn’t improved.”

He was born in Leicester as Samit Rohit Patel coming from a Gujurati family of Indian origin. Patel started his career by making his début for Nottinghamshire at the age of 16. He was featured consistently in the team, in both first class and List A matches. 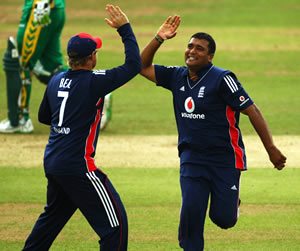 Patel made his debut for England’s senior one-day team in a match against Scotland on 18 August 2008. He hit the mark for England when fans saw him win a match award against South Africa in 2008. Taking the notable wicket of Herschelle Gibbs in the first ODI of the series at Headingley. He recorded figures of 5/41 and scored 31 runs off 49 balls in the third ODI to win the man of the match award as England claimed the series.

His form compared to his weight is very admirable. He might even have replaced Michael Yardy in the World Cup team if he had been available, simply based on his superior stroke-playing ability.

Being athletically fit in cricket is very important today compared to the past. It’s a very different game with different standards and expectations of the players. Patel claims that he has a large body shape and just tends to perspire frequently, which perhaps was previously acceptable for being ‘cricket fit’ but Flower is not happy with his state of fitness. Flower said:

“We don’t expect any of our guys to be perfect, physically, but we do expect them to work hard and it is an indication of your mindset and how much you want to play for England, how you are able to discipline yourself.” 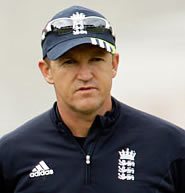 He added, “In fact, all we wanted to see was an improvement, but a significant improvement. He hasn’t done that.”

Despite repeated pleas from England’s selectors for a change of attitude Patel has been outcasted since early comments were made about his fitness. England’s previous captain Kevin Pietersen has described Patel as “fat, unfit and lazy.” A year ago, Geoff Miller, the national selector, said: “He knows what is required … the ball is in his court now and he has to go away and understand what is necessary.”

Mick Newell, Nottinghamshire’s coach, suggested that Patel’s wedding in October 2010 had led to a further slipping of standards during his honeymoon. “Andy’s given Samit a lot of time, it’s nearly two-and-a-half years since he played for England, so he’s been well aware of what’s been required of him to get back in the squad,” said Newell. “I think Samit’s let himself down,” he added.

Some reports claim that even Samit’s mother was told to reduce oil and fats in her cooking, to aid Samit lose weight. But it seems none of that has worked or affected him to meet the expectations of Flower.

Under the Flower-Andrew Strauss regime England have blossomed into a well-disciplined and professional outfit, and Flower is unsure whether Patel will ever fit that mould. “We want tough, determined cricketers playing for England and he is not indicating that he is capable of that,” he said.

Samit Patel seemed to have blown his chances of playing in the World Cup by not getting fit enough for England. Hopefully, this will not deter the selectors completely of selecting him in the future because many feel he has a lot to offer to the team.

Baldev enjoys sports, reading and meeting people of interest. In between his social life he loves to write. He quotes Groucho Marx - "The two most engaging powers of an author are to make new things familiar, and familiar things new."
IPL 2011 Teams and Players
10th BASA Shortlist for 2011