The History of Mujra Dancing in Pakistan

Mujra dance is a popular form of entertainment in Pakistan. From the Mughal era to modern times, we present the history of mujra dancing in the country.

"We navigate a man’s world in female bodies"

Mujra dancing in Pakistan has a long history, which goes back to the Mughal era the Indian subcontinent.

This type of dance naturally followed Pakistan post-partition of India, with females performing the tradition.

Mujra performing girls and women have different names and statuses in society, including a prostitute, tawaif and courtesan.

It also incorporates poetry from other periods of the Mughal era, particularly the reign of ruler Bahadur Shah Zafar.

They also take place in theatres and halls, as well as during special events. Technology has also enabled the live streaming of mujra dancing across the world,

We closely take a look at the advent of mujra dancing, its connection with prostitution, the negative image of theatre, the famous dancers performing this art, contemporary forms and the fraternity risks.

The Start of Mujra Dancing 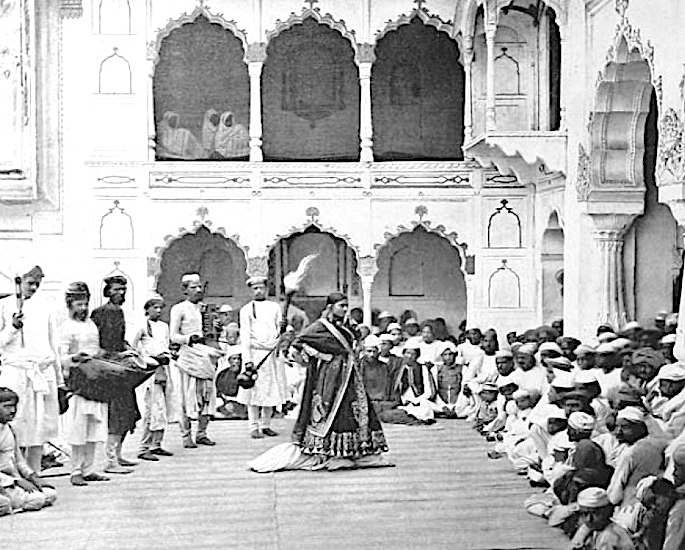 Mujra dancing traces its roots to the 15th and 16th centuries, during Mughal rule.

Historians believe that Mujra became a popular genre during the 18th century. The women performing regularly took on the role of courtesans amongst the royal blood of the Mughals or rich supporters.

Courtesans were on duty to perform the mujra. Males from wealthy families had to visit houses of tawaifs and top courtesans to learn about behaviour and mannerisms.

But with mujra being a high-priced source of entertainment, only the high class rich could afford it. Even then the elite would spend money on this only during grand occasions like marriages or the birth of a male heir.

The courtesans used to perform a mythical or legendary tale (like a sang) during such occasions.

A certain class of people objected to this form of entertainment because of the audacity with which these courtesans performed their act.

The red-light district of Lahore, Heera Mandi (diamond market) eventually became a hub for mujra dancing. This saw a mixture of traditional singing and extravagant dancing for the elite class.

Links to Prostitution and Sex 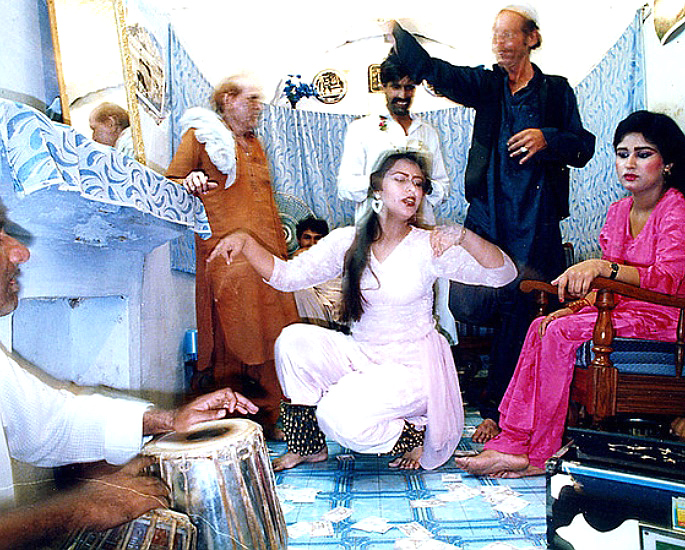 Differences between a courtesan, mujra-dancer and prostitute were not very clear when the British came.

However over time mujra dancing and sex became linked, as Heera Mandi became a place of immoral and dishonourable actions.

With the passage of time mothers passed down mujra to their daughters. Dancer, Reema Kanwal recalls the “glorious” times.

“People used to respect the prostitutes of Heera Mandi, we were called artists.

“But all has changed over the last decade. Now we don’t have any honour.”

Reema comes from a family of prostitutes, with her mother and grandmother also once in this profession. Hence, she had to follow in their footsteps, dancing and satisfying men in Heera Mandi.

With historic traditions fading away, girls are less reliant on musicians and teachers that had music shops in old Heera Mandi.

The early dancers used to cover themselves. Their “dupatta” was pinned up in a fashionable way as they danced with harmonious and skillful moves to the tabla, harmonium and sitar.

However, according to music shop owner Soal Ali, times have changed:

They take a USB or sometimes they don’t even need that, they have songs in their cellphones, they plug a cable and play the music.

All they do is wear fewer clothes, use two or three moves that require their body parts to move frantically and become demanding.

There are also semi-nude mujra dances as well, visited often by the Pakistani male youth. The dancers often show glimpses of their private parts while dancing, as a teaser to the on-lookers.

This, of course, is highly seductive to the men who come to watch.

They enjoy, and after a great time of merry-making, slip away to have intercourse with the dancers. The highest bidders get to go to bed with these mujra dancers. 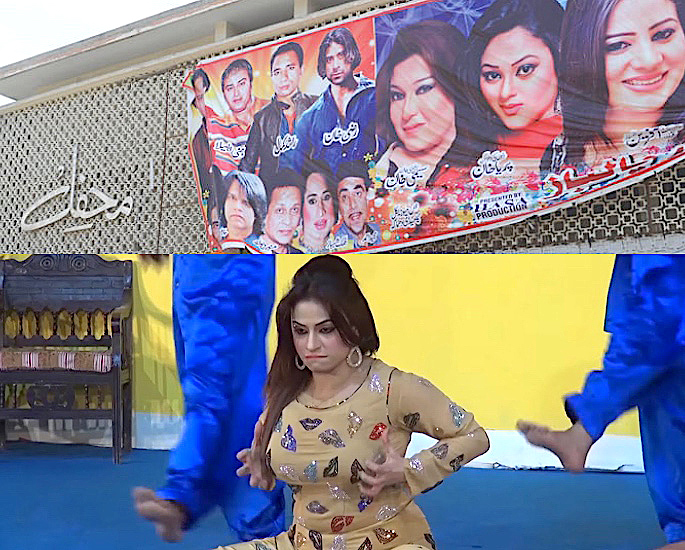 Following the rule of General Muhammad Zia-ul-Haq (1924-1988), mujra girls made a return by continuing their business under different levels of state policing.

Whereas previous western depictions on the topic displayed the post-partition mujra girl as a sex worker to be ‘saved’ by illustrating the colonial analysis of the institution.

Having said that, the dynamic of mujra changed and they do not solely take place at khotas. The performance of mujra has taken place on stage in theatres and halls, at farmhouses of the elite and are available to watch on YouTube and CDs.

Unlike the stage plays of the 80s, later theatre became a hub for vulgarity. During extempore performances, explicit dialogues and vulgar dances became the norm.

The late playwright Madeeha Gauhar told Dawn how this period of vulgarity was dangerous for women:

“Vulgarity is just not vulgar dances, it’s all about developing attitudes. It’s a strange kind of a theatre where women are insulted and taken for granted.

“Such an insult of women develops anti-women attitudes that further leads to violence against them.”

Males in the form of producers, writers, directors and even audience members control this business, along with seeking pleasure from it. 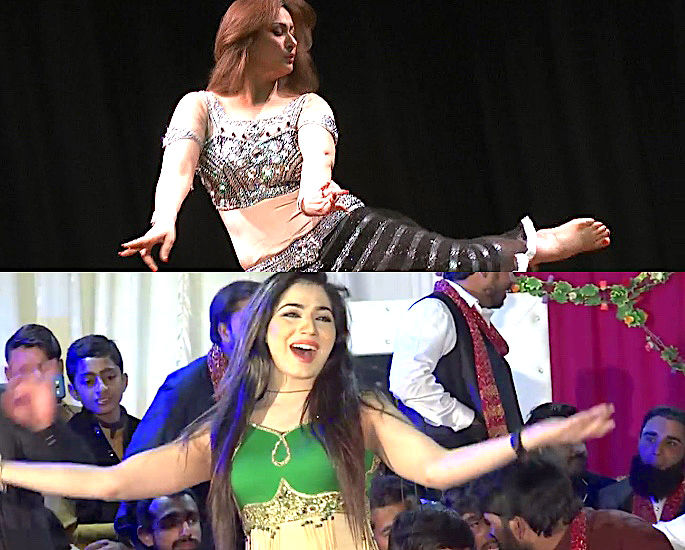 There are several names who became popular mujra dancers. Nargis who tops the list began her career in the nineties.

Her performances consisted of classical dance moves, including some highly sexual components.

Her mujra performances made Nargis the highest-paid artist from Lahore. In 2016, she was the most top-earning artist in the country. Nargis was no longer active in the mujra dancing scene.

The younger sister of Nargis, Deedar was also a standout mujra artist in the country. She has since left the industry to concentrate on her beauty business.

With a figure, which was slimmer and thinner than others, Deedar had an enormous impact.

This beauty was successful with her colourful moves and style. The Lahore based artist was a regular entertainer at numerous big shows and stage occasions.

Her mujra style was more suggestive and appealing than others, attracting a huge male following.

Megha and Reema Jan were also very popular dancers from the 90s era.

She doe only seduce people with her performance but also through vulgar language and abusive comments. The male community is a fan of her vulgar jokes.

Speaking about surviving in the industry, mujra powerhouse Afreen says:

“We navigate a man’s world in female bodies, this requires masculine behavior for survival.”

Mujra dancer Mehak Malik is also famous for her mujra dancing. There are many rumours surrounding her. She apparently is a shemale dancer who charges a high price for carrying out a performance. 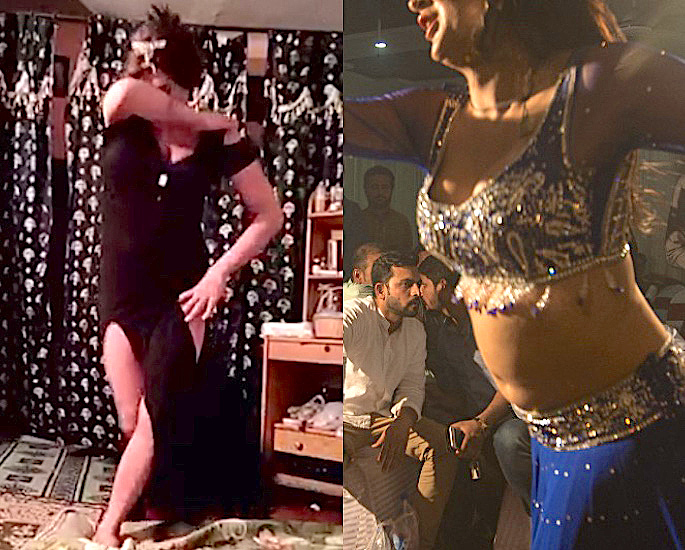 Firstly mujra continues to take place on stage at commercial and low-level theatres across Punjab.

Majority of the dance moves are sexual, suggestive and provocative. The women with very little clothing symbolise vulgarity.

It is also traditional for Pakistani men to throw paper currency over women who perform mujra dancing at these events.

Additionally, mujra dancing is also available online through various apps, catering to worldwide audiences, especially in the Middle east. The mujra dancers also chat with people who financially support them.

Popular apps include ‘Private Night Mujra Dance’ and others.

Despite technology, modern mujra dancing is very different from the courteous Mughal era or what we have seen in Bollywood

Mujra was portrayed in Bollywood films like Umrao Jaan (1981) and Devdas (2002), with finesse and delicacy t show the past Mughal rule and its culture. 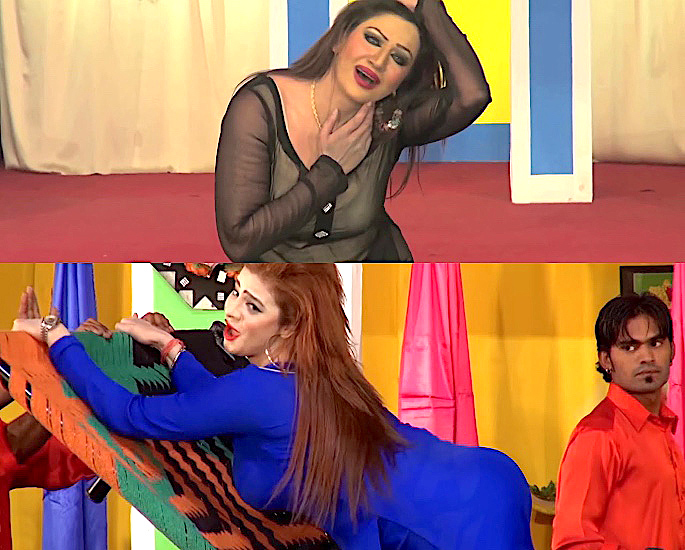 Whilst mujra dancing can bring fame, money and a luxurious lifestyle, mujra dancers are always on the edge of the sword, with their lives at risk.

There is no acceptance for such girls in Pakistan. They are often just used and abused by a male dominant society who tend to throw them out in the darkness of the grave.

Men with equipped firearm forcefully disrupted a performance featuring Afreen. As a result, Afreen faced harassment, after the audience was forced to leave.

Afreen says she had to head for Lahore, following the incident:

“That was the moment I decided to leave my town and move to a bigger city, Lahore, for work.”

History suggests that Pakistani working-class women from the entertainment industries have had to endure such violence.

In the early 2000s, Nargis was beaten and had her head shaved off by local goons from Lahore.

Local gangsters shot Saima Khan in the leg, following her refusal to perform a mujra dance in 2007.

Mujra dancer Honey Shahzadi’s house was attacked by an ex-boyfriend, resulting in the loss of her sister-in-law and bodyguard.

The ex-boyfriend of Kismet Baig shot her in the palms and legs after she was pulled over outside her house in 2016. After receiving more than eleven shots, she passed away in hospital.

Despite the violence, and no one fighting the corner of dancers, mujra dancing remains a popular form of entertainment in Pakistan.

With technology and other platforms, mujra dancing in Pakistan will continue to evolve.

Ayesh, a Masters in English Language and Literature degree holder adores music, culture, arts and fashion. Being highly ambitious, her motto for life is, "Even the Impossible spells I'm Possible"