Shahrukh’s Slam! The Tour was a massive success in Houston, USA. Fans went crazy for the cast of Happy New Year and their incredible performances from Deepika, Abhishek, and Yo Yo Honey Singh.

“We promise you an evening of love, laughter and entertainment."

Houston was the grand opening for SLAM! The Tour on Friday 19th September 2014, and what a slamming show it was!

The Happy New Year cast saw fans going crazy when they landed in Houston; and they all received a huge welcome from their loyal American fans. 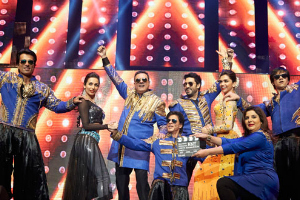 Vivaan Shah opened the performance with the ‘Slam’ track. The beautiful Deepika Padukone made her graceful entrance and stole the audience’s hearts with her amazing dance moves.

Shahrukh Khan made an extravagant entrance to the stage by being carried through the air on an Aerial Cable!

Malaika Arora Khan had the audience rolling their hips with her performance of Kick’s ‘Devil’. Sonu Sood joined her with their thrilling performance to the hip busting song ‘Munni Badnaam Hui’ from Dabanng.

A special comedic stage by Farah and Boman had the audience in stitches. They were talking about Boman’s demand to be the lead role in Farah’s movie, reminding the B-Town lovers about their comedy duo in the movie Shirin Farhad Ki Toh Nikal Padi.

King Khan, Abhishek, Boman, Vivaan and Sonu joined him on stage and joined in on the ‘Lungi Dance!’ 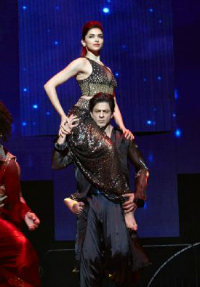 The show returned to the main lead’s chemistry as SRK and Deepika Padukone entwined with one another with the (never performed live) romantic song ‘Satrangi Re’ from Dil Se.

This is SRK’s return to Houston after a whopping 10 years: “I am blessed to get a lot of love and support from people around the world. This is our way of giving this love back and thanking you all.”

In the press conference before the show, SRK said he had been anticipating the tour after such a long time:

“I am super excited and looking forward to being in your city along with the director and the cast of our next film Happy New Year and my colleagues Farah, Deepika, Malaika, Abhishek, Boman, Sonu, Vivaan, Kanika and Honey Singh.”

He promised his fans that it will be a tour to remember: “We promise you an evening of love, laughter and entertainment. So mark your calendar and be there at SLAM! THE TOUR,” said SRK at the Houston press conference.

SRK certainly delivered his promise to his many fans, the SLAM! The Tour shows so far have been a huge success!

The shows are still to take place in Chicago, Vancouver and San Jose, before heading to the UK on October 5th, 2014!