Italian comic artist Silvia Carrus talks to DESIblitz about how she uses her work as a light-hearted way of addressing issues of gender in comics.

Throughout the years, art has always been used to highlight issues like gender or race in comical ways. Thankfully, with growth of social media, art has taken a whole new level of highlighting issues – like feminist cats!

Her work has appeared in many different publications and websites, like Indie Comics Quarterly Issue #1, TYCI zine, Soft Revolution Zine, The Rumpus, Dirty Rotten Comics Issue #4 and so much more.

She is also a monthly cartoonist for the feminist websites Femsplain and The F Word alongside regularly posting comics on her Tumblr blog.

DESIblitz had the pleasure of meeting Silvia Carrus at the MCM Comic Con 2016 in Birmingham, where she told us more about gender and feminism superheroes in comics.

When did you start drawing and creating comics and illustrations?

“I’ve been drawing ever since I was little, my mum used to be a painter so I’ve always been artistically inspired by her. I began sharing my work online at the age of 14, mostly doing fanart.

“It was only around a year ago I decided to start working on comics and sharing them on Tumblr and Twitter. Drawing has always been my passion and I haven’t stopped since I first started creating stuff.” 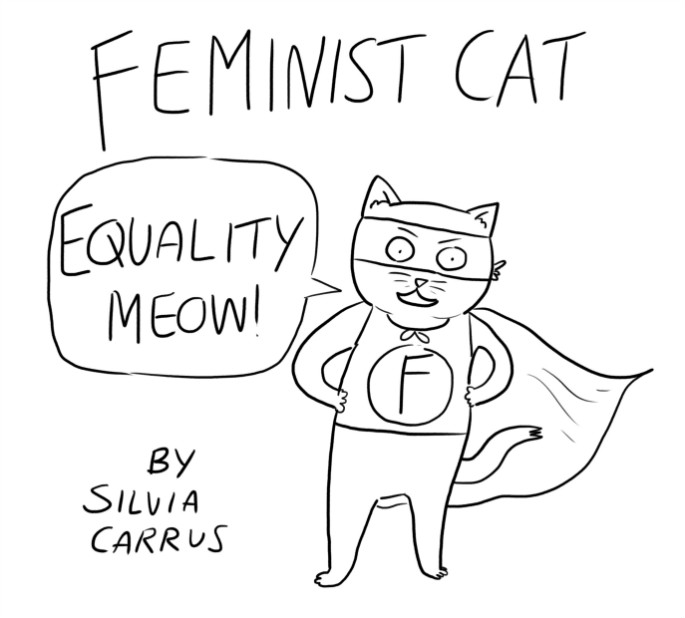 What are your biggest influences when it comes to your comics?

“A big influence have been Tumblr artists, I have been enjoying comics since I was a kid, but only when I found out about Tumblr and saw other artists’ blog I got inspired to try and start making my own comics.

“Before then, the comics industry seemed something inaccessible to me, but seeing loads of people just setting up a blog and sharing their work through them made it seem possible for me too.

“Anne Emond, Kate Leth, Kelly Bastow, Gemma Correll and Megan Gedris are the ones whose work I have been following even before I started and that through their work made me feel like I should give it a go myself. Especially Leth and Gedris as they also have made comics related to gender issues in the past.” 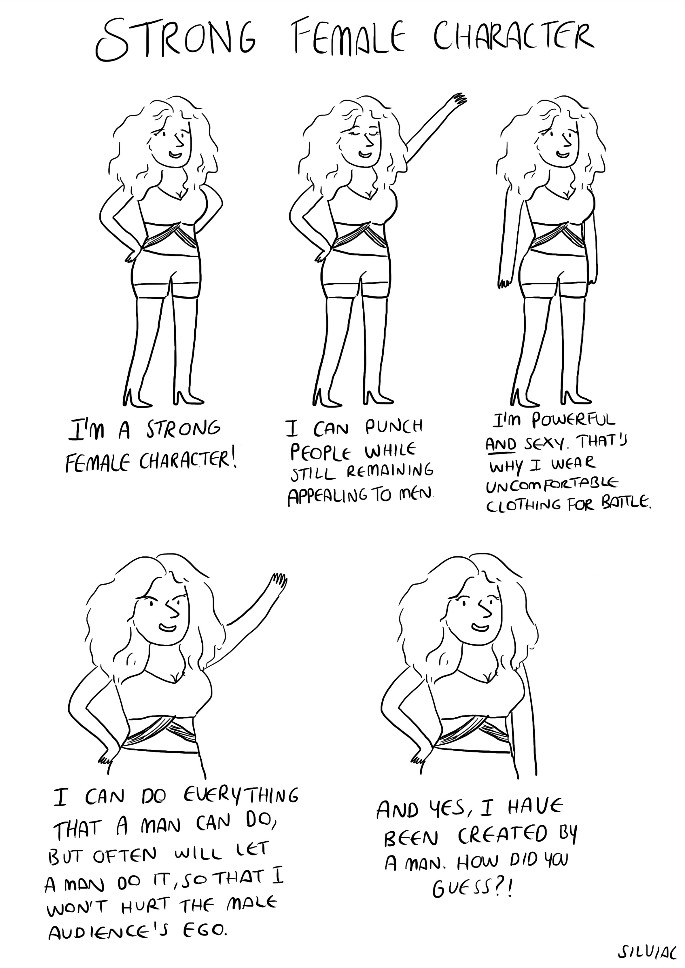 What gave you the idea to use comics to highlight social issues?

“When I first started making comics, I sometimes made them as a way to share some personal experiences (often about anxiety) and opinions.

“Once I began getting informed about feminism and started noticing more the misogyny even in everyday things.

“I felt like the best way for me to get involved and ‘fight the patriarchy’ could be with my art and sense of humour.”

“I started with ‘Feminist Cat’, which combined two of my biggest passions: cats and equality, to then have the pleasure to work with The F Word and Femsplain to keep creating comics about different themes revolving around feminism.

“When creating your work, do you consciously think about gender and race when it comes to your characters?
I often do, my plan for the future is to actually make more gender neutral characters, as I want to tackle more the concept of gender as a social construct.

“Plus the fact that people don’t always can simply identify with one or the other, but usually when I plan to make a comic I tend to make it about women, of different race and sexuality. I want to make sure that my feminism is intersectional.”

How did you come up with funnier ways (like Feminist Santa) to highlight issues of gender?

“I have always wanted to make comics to make people laugh, when I go to conventions, there is nothing better than seeing people enjoying and laughing because of what I made.

“So it felt natural for me to start tackling feminist issues with humour like I do with most things in life, sometimes it’s just an over exaggeration of some stereotypes (for example, I made a comic making fun of the concept of ‘real women’ where I said that real women can contact Satan and turn into ponies), other times I highlight an issue, like with my Strong Female Character comic.” 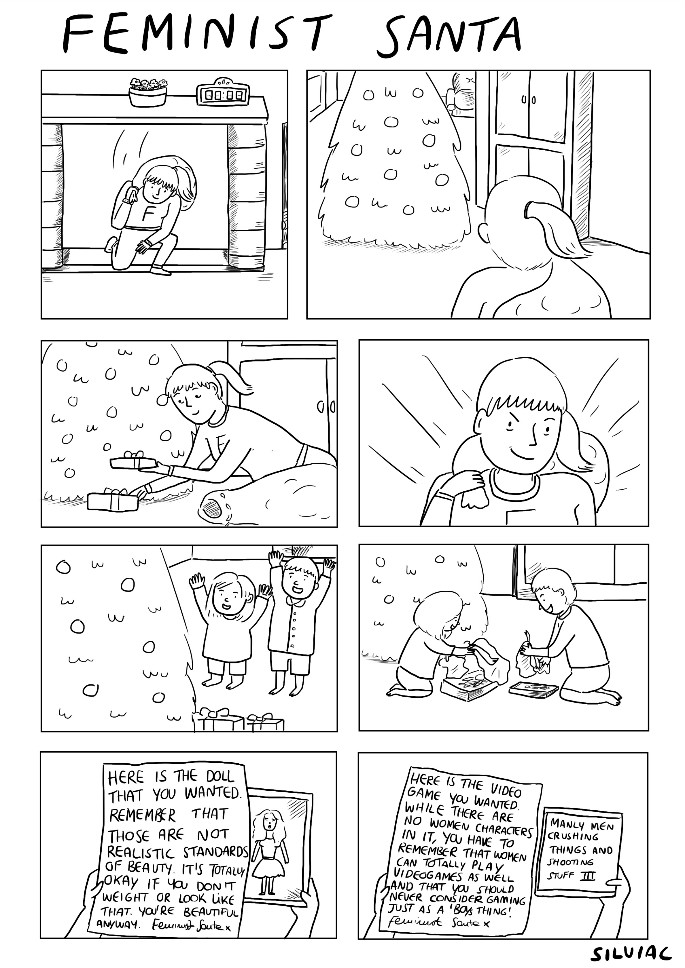 A lot of your comics show and highlight feminist issues, have you ever faced any backlash as a result?

“Mostly with the ones that get shared a lot on Twitter. They usually all go down to the typical ‘But not all men…’ comments and tend to try and prove them wrong.

“Often they just try to point out that there are also some women who do the same thing, which doesn’t really justify the men, usually the majority, who do it.”

Comic books and strips have a long history of being male-centric, do you think that this is changing?

“I like to be optimistic about this and I think that with the rise of more outlets for independent creators there are definitely many more opportunities for women in comics than there used to.

“I do think that when it comes to big comic publishers there is still a lot of work to be done, though, the content of comics might become more diverse but the creators behind it often still tend to be just men. 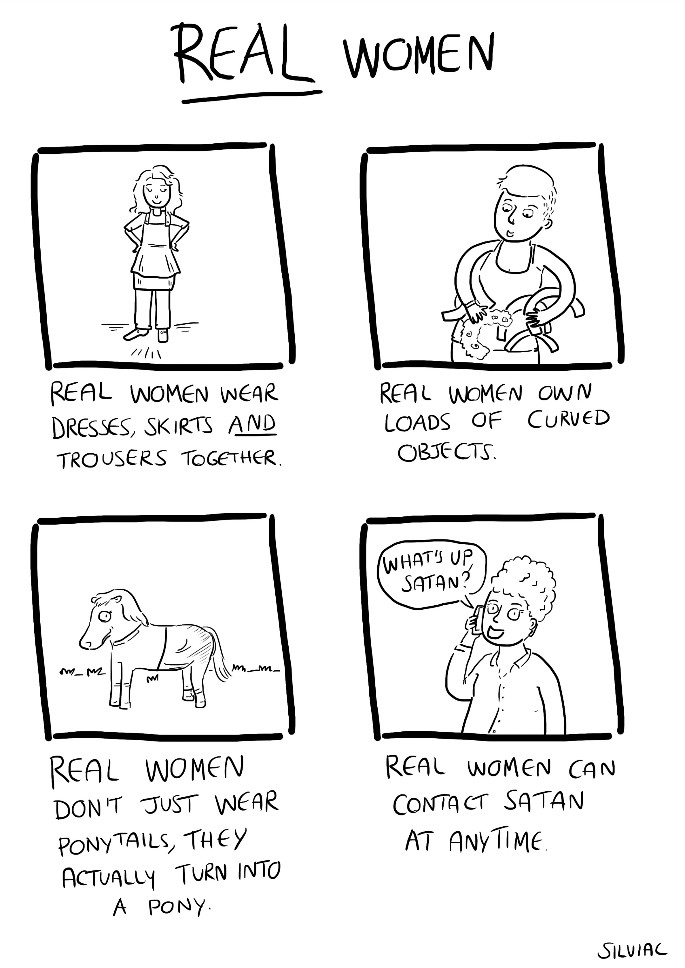 What will you be working on in the future?

“I have recently finished working on the first issue of my new comic series, ‘The Feminist Superheroes’, that debuted at the Birmingham Comic Con.

“Now I intend to keep going to more conventions to show all of my work to the lovely people around the UK (with May’s London Comic Con, Lakes International Comic Art Festival and Thought Bubble being the main ones that I have already confirmed) and in a couple of months I plan to also begin working on the next issue for that.”

You can find Silvia’s works on Etsy and her Website. She also regularly posts her comics on Tumblr.