Sri Lanka is home to many talented women writers who share their experiences and creativity as poets and authors. DESIblitz presents 5 outstanding women.

Rosalind Mendis became the first Sri Lankan woman to write a novel, in the year 1928, with The Mystery of a Tragedy.

Since then, many women writers have emerged from the gorgeous island with powerful words which could touch the hearts of their readers.

Sri Lanka, though it shares strong bonds of culture and language with its counterparts in South Asia, stands for its unique style and stance in the literary arena.

It was the first country to have given the world a woman Prime Minister, proving the social and political emancipation of women.

Sri Lankan women throughout the history have enjoyed more freedom and independence compared to the other women in the region.

The women who are writing in English are a handful since Sri Lanka’s dominant language is Sinhala followed by Tamil.

Sri Lankan women writers are gaining international acclaim and they have come forward as the voices against injustice, marginalism and war.

Beneath a Botree
in a shower of sticks and stones
flung by his neighbour’s hands.
The joys of childhood, friendships of our youth
ravaged by pieties and politics
screaming across our screens her agony
at last exposed, Sri Lanka burns alive.

Educated at the University of Ceylon and the later University of Cambridge, Professor Yasmine Gooneratne has more than 3 decades of rich experience in research, English Literature and Postcolonial literature.

The Sweet and Simple Kind, her first novel, was shortlisted for the 2007 Commonwealth Writers Prize and nominated for the 2008 Dublin International IMPAC literary award.

Dr Gooneratne has registered her sorrow over the violent communal clashes which completely disrupted the peaceful coexistence of multiculturalism.

Yasmin has published 20 books which include the critical studies of Jane Austen and Alexander Pope.

She has also written volumes of literary essays as well as poems, short stories, a family memoir, and two novels.

Her book Relative Merits (1986): A Personal Memoir of the Bandaranaike Family of Sri Lanka, paints the fusion of British culture into the Sri Lankan cultural experience. The author describes a prominent Sri Lankan family’s journey against political pressures, nationalism, the ideals of a new nation, romance, and family bonds.

Her novel Change of Skies won the Marjorie Barnard Literary Award for Fiction in 1992 and was shortlisted for the 1991 Commonwealth Writers Prize.

Yasmin’s second novel, Pleasures of Conquest, was shortlisted for the 1996 Commonwealth Writers Prize. 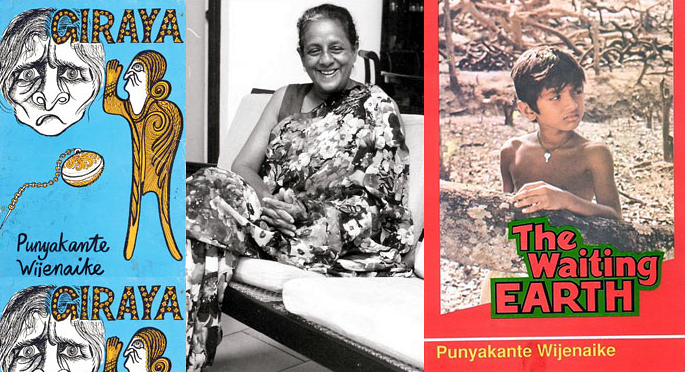 We lived in a rambling house halfway up a hill At the very summit of the hill towered an enormous tree beside which crouched a dark rock boulder. When it rained hard, whenever there was lightning and thunder, as there is now, I expected this tree and the rock to come crashing down on our house. I had also experienced this same fear of losing control of myself, people, situations. Was it because I was suppressed as a child and now, today, as an adult?

She published her first anthology of short stories, The Third Woman, in 1963. Punyakante is known for her distinctive style of storytelling.

She has published six novels and four collections of short stories, with more than 100 stories published in newspapers, journals and anthologies locally and globally.

Her novels often interpret the lives of the marginalised and the minority. She focuses on the hardships and struggles of human existence. Her 1998 book, An Enemy Within, uncovers the masks we wear to escape from the reality.

In 1994, she won the Gratiaen Award for her novel Amulet. The Giraya was adapted into a teledrama by Dr.Lester James Peries. In Giraya, the issue of homosexuality and the power play in a traditional mansion in Sri Lanka are beautifully painted. 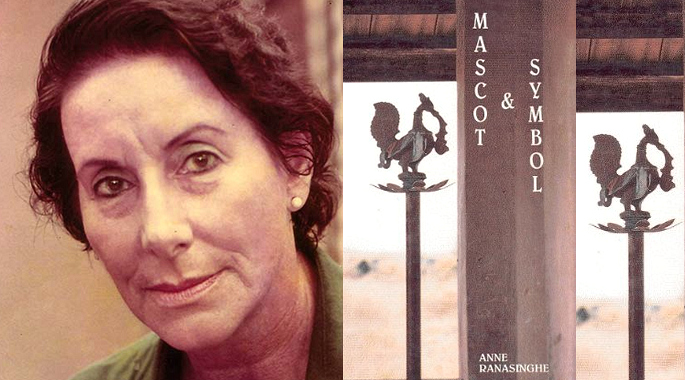 I tell her what I know
Is not true, that life
Is always better than death
She frowns
If there is revolution, she says
I’ll kill myself. All those horrible things
They do to people
The bullock has fallen on the rough
Edge of the road, He tries
But in spite of the
Stick he cannot rise
Lord have mercy on his eyes
My daughter is just thirteen.

Anne Ranasinghe is an internationally renowned English poet and writer of fiction from Sri Lanka.

Fleeing from Nazi Germany to England, she married a Sri Lankan professor and settled down in Sri Lanka.

Her debut collection of poems And The Sun That Sucks The Earth to Dry was published in 1971. Anne has published poetry, short stories, essays in English which were translated into more than nine languages.

Anne Ranasinghe’s versatility and her deep compassion towards humanity have earned her distinct place in the literary arena.

Themes of estrangement and the hostility towards the minority are found in many of her poems.

In 1994, she was acclaimed with the Sri Lankan Literary Award for the best collection of short stories.

She is a founding member of the English Writers’ Cooperative of Sri Lanka and the editor of its journal, The Channels. 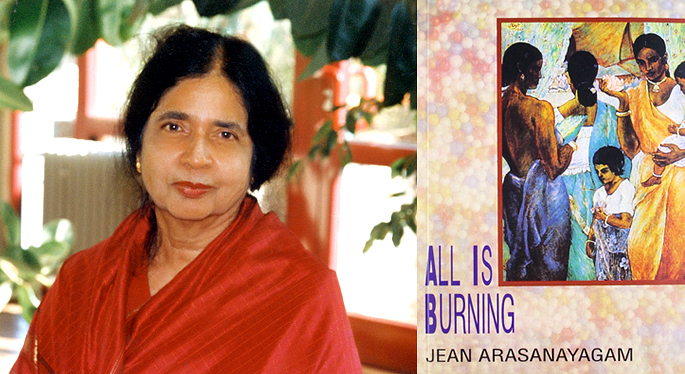 And stories of her own life, there were many
That she told me, stories dark with the
Thunder of death and fear but it was
Always me whom she led out of danger
When the high wind rose and the boat
Capsized in the lagoon lifted me high
Above the water and then again
When one dark night she fled with me
Across the fields clutching me, an infant in her
Arms;

Dr Jean Arasanayagam is a Sri Lankan poet who primarily examines the lives of people on the margins of society.

As a poet and author, she has contributed immensely towards the English Literature in Sri Lanka for exceeding four decades.

She has been married to a Tamil Doctor. Thus, they were subjected to racial riots in 1983 and had to undergo the tragic days in refugee camps. Her bitter experiences in refugee camps have influenced her writings to a great extent.

Her expressions are authentic, picturesque and appealing.

Jean Arasanayagam poems trigger compassion, love and peacefulness among the readers. Her graceful language, imageries and symbolism create a perfect balance and harmony in her writings.

The Cry of the Kite is a collection of profound poetic statements of Jaffna in northern Sri Lanka which describes the modernisation and the rapid decay of lives.

Jean Arasanayagam was honoured with the National award for Literature in 1984. Having written many works of poetry, prose and short stories in English Jean Arasanayagam is celebrated around the world.

Jean was also honoured with a doctorate in letters by the Bowdoin College, USA. 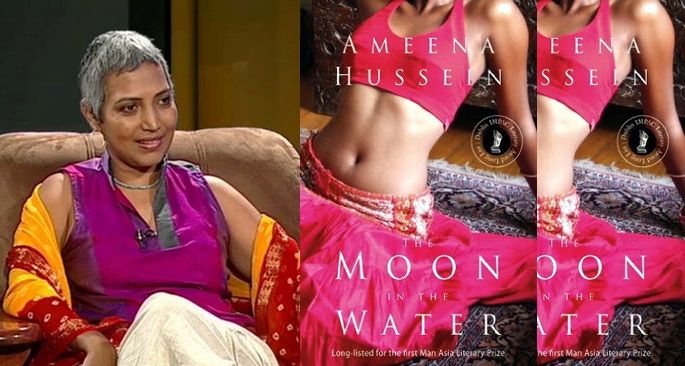 From The Moon in the Water:

Sometimes, she thought . . . she would have liked to have
had a relationship with a Sri Lankan man. It was tiresome
to have to explain everything from the simplest cultural
reference to what you are, to how you are, to how you
pronounced words

Ameena Hussein hails from Colombo, Sri Lanka and wears many hats such as sociologist, editor, publisher, and a novelist.

She graduated with a degree in Sociology, specialising in gender and ethnicity and worked for ten years in a non governmental organisation focusing on Violence against Women and Human Rights.

Influenced by her deep passion in sociology, Ameena started to write short stories and debuted with her first book Fifteen in 1999.

Her novel The Moon in the Water was longlisted for the 2007 Man Asia Literary Prize.

In her novel, The Moon in the Water, Ameena Hussein portrays the journey of a girl seeking her own identity within the Muslim community of Sri Lanka. She explores and exhibits the less known insights into customs and traditions.

Her second book of short stories Zillij 2003 was honoured with the State Literary Prize.

Ameena was also an editor of Sometimes There is No Blood, a survey of research on violence against rural women by the International Centre for Ethnic Studies in Colombo.

In 2003, she co-founded the Perera Hussein Publishing House with her husband.

Though we have picked only five authors, many talented women writers in English from Sri Lanka have emerged, placing the country on the literary map of the world.

Shameela is a creative journalist, researcher and published author from Sri Lanka. holding a Masters in Journalism and a Masters in Sociology, she's reading for her MPhil. An aficionado of Arts and Literature, she loves Rumi's quote “Stop acting so small. You are the universe in ecstatic motion.”
Silvia Carrus talks Gender & Feminism in Comics
Abda Khan explores Izzat and Honour in novel Stained