Sevan Greene’s cabaret-play, The Greene Card, is an eye-opening insight into racism in the West. In an exclusive Gupshup with DESIblitz, the writer and actor discusses his inspiration behind the piece.

"I wanted people to hear and understand how hard it is to be an immigrant."

Sevan Kaloustian Greene’s cabaret play, The Greene Card: The Unbelievable, Yet Completely True, Story of a Brown Boy in a White World, looks at the sensitive issue of immigration in the West.

Drawing from Sevan’s own personal journey from the war-torn Gulf to the American dream, the play is a musical delight.

In an exclusive Gupshup with DESIblitz, we find out about Sevan’s inspiration behind the semi-biographical piece, and his views on racism in Western Society.

Q: Can you tell us what inspired you to write The Greene Card? 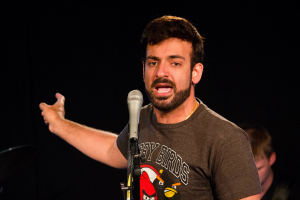 A: “For years people had been bugging me to tell my story of escaping the war, but I honestly never thought it was as interesting as listening to other people’s stories.

“Royal Central [London] were having an open mic night based around biographical stories. I wrote about 10 pages the night before. I performed it and it went well.

“I’m not a political writer, nor a polemical one; it’s not my thing. I had reached a point of frustration where I needed to express my fed-upness with race in Western societies.

“I wanted people to hear and understand how truly hard it is to be an immigrant who is also a war refugee who grows up loving the West and is ultimately rejected by it for no good reason.”

Q: Why did you decide to present The Greene Card as a cabaret play?

A: “I’m a fan of cabaret shows, but I didn’t want this to be a concert.

“I wanted it to be a play with the structure of a cabaret. Because music has been an important part of my life, I wanted to find a way to use the songs to tell the story.”

“For The Space we’re creating a sense of intimacy and comfort by using tables and chairs and setting it up like a cabaret. The performers will be down on the floor with the band on the stage. I want the audience to feel a part of the story.”

Q: Do you feel that racist attitudes are still an inherent part of Western society? 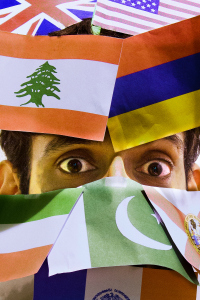 A: “Yes. I don’t think that is ever going to change.

“Racism is an issue across the globe, not just in Western society, but I think we come to expect more out of Westernised countries not to be stuck in antiquated divides based on skin colour, religiosity, or general ethnocentrism.

“The irony is that I didn’t know there was a race issue, until I ran from Florida to live in New York and banged my face right into racism in the theatre industry of all places.

“There’s a story I tell in the show of a reference to Slumdog Millionaire I overheard during an audition to refer to the waiting room, people think it’s made up. It’s not, unfortunately.

“I will say that race is not as much of an issue in the UK, personally, I feel so much more at ease here.”

Q: How was the experience of working with your cast and production team?

A: “The biggest issue I had was not money, but casting. It was virtually impossible to find three black singer-actors because the good ones are on the West End and wouldn’t do a small production.

“Ultimately there aren’t enough artists of colour in London because there’s not enough work to support them. So they go off to the States.

“The cast and production team I had for the Camden fringe run, which was only the actors, myself, and the MD, were incredibly generous with their time and talent.

“They essentially worked for free, stayed loyal, [and] worked their butts off. I love that I have a diverse trio that are defying their racial expectations and those of the characters they are playing.

“I have a fantastic producer, Emily Herbert and director (Daniel Huntley Solon) who has a good eye. I really can’t wait for the run at The Space. Especially with the changes and some extra bonus features.”

Q: Tell us about the creative process behind the music of the show?

A: “Music is a living breathing entity to me. I’m a huge believer in vibrations and waves. It’s the only way to explain why we ‘feel’ things when we listen to music. So I made a list of songs that meant something to me or that made most sense in telling my journey.”

Q: What does a Western/American identity mean to you? 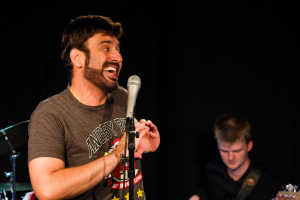 A: “I don’t feel like an American. I am Lebanese-Armenian and Pakistani. That is my identity. I just also happen to be Western and legally an American.

“For a long time I denied my cultural heritage in favour of being as white and American as I could be.

“But at the end of the day, I will always be a Lebanese-Armenian/Pakistani boy traversing this world trying to find a home again. I don’t think I will ever stop being an immigrant.

“My history of survival is something I am proud of and never begrudge. It’s genetic in my family: my father with the 1947 Partition, my mother and aunt with the Lebanese Civil War, my grandmother with the Armenian Genocide.

“It’s sort of my birth right. I can’t imagine how boring and – normal – I would be without all that history behind me.”

The Greene Card promises to be an interesting and engaging watch, and will show at The Space (London), from September 16th-20th.

Rachael is a Classical Civilisation graduate who loves to write, travel and enjoy the arts. She aspires to experience as many different cultures as she can. Her motto is: “Worry is a misuse of imagination.”
Yasmin Akhtar ~ Home Away From Home
Rifco’s Happy Birthday Sunita stars Shabana Azmi