DESIblitz had the pleasure of attending a music and dance spectacular, Bollywood The Cabaret, led by Sneha Mistri. Read on to find out our take of the musical show.

Sneha [Mistri], the female lead, and her Spanish understudy stole the show.

When DESIblitz went to watch Bollywood The Cabaret, we weren’t quite sure what to expect. But it turned out we were pleasantly surprised.

The show which was choreographed by Birmingham’s very own Sneha Mistri saw a fusion of musical genres and talents.

From the likes of classical Indian dance to funk, jazz and ballet and a mix of new and classic Bollywood hits.

The show received excellent response as people from all walks of life came together to enjoy the evening, including different age groups that varied from toddler to pensioner. 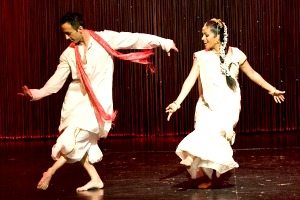 Sampad is a Birmingham based agency for South Asian arts.

Although Sampad is Birmingham based, the agency has a wide reach and plays a significant role in promoting the various art forms that originate from India, Pakistan, Bangladesh and Sri Lanka.

It was in Solihull, Birmingham that Sampad actually presented Bollywood The Cabaret, in association with the Solihull Arts Complex.

Before the show began, the Mayor of Solihull said:

“We very much hope you enjoy Bollywood The Cabaret which is celebrating 100 years of Bollywood cinema.” 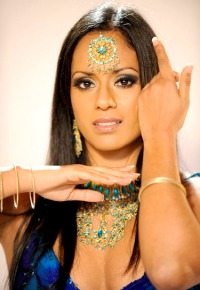 The evening combined an Arab meets Spanish influence of great music and dance with a Bollywood backdrop.

The Anjali Dance Group, who originate from Solihull opened the show with a 10-minute curtain raiser.

The show got off to a fantastic start, with very traditional costumes and a dance that captivated the audience completely.

Next there was a voiceover which introduced the main show and this was followed with a burst of colours and sounds. The show certainly had a Spanish feel to it with not only the outfits but also because of the music and dance moves. There was a nice fusion of Bollywood meets Spain at this stage. 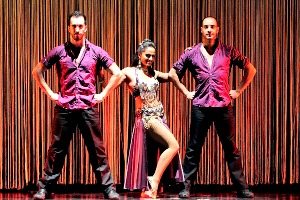 The show within the show concept was quite easy to follow and the voiceover definitely helped clarify things. With a small cast consisting of eight performers, it was relatively easy to follow even though there was a lot going on.

The story follows the lives of Rahul and Monica (played by Sneha). They are childhood sweethearts, but having relationship trouble, as do most couples.

Rahul cheats on Monica, with her understudy leaving Monica heartbroken. We also find out Jay, Monica’s best friend is completely in love with her.

The packed audience enjoyed the show going into the interval, before returning to watch the finale. After the intermission, Monica realises she wants to be with Jay and they get together and live happily. However the show is not over, and the cast dance to a couple of songs, and even get the audience involved! 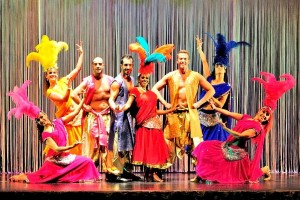 This was a great interactive piece, and was arguably the fun part as absolutely everyone in the audience danced by following the moves of the cast. The traditional moves included a shimmy, the light bulb and poses which left everyone smiling.

Sneha, the female lead, and her Spanish understudy stole the show respectively as they were such fantastic dancers.

Sneha had amazing Bollywood moves while the Spanish artist had amazing Spanish moves infused with a type of gymnastics.

The performances on display celebrated 100 years of Indian Cinema in style. Overall the show was enjoyable and entertaining and the audience participation definitely made the evening better.

Sumera is currently studying for a BA in English. She lives and breathes journalism and feels she was born to write. Her life motto is 'You don't truly fail until you stop trying.'
Aishwarya joins Beyoncé at Chime for Change
Ustad Tari Khan ~ Tabla Master Extraordinaire