Satya Nadella, born in India, has been named as the new CEO of multinational technology corporation, Microsoft, after joining the company in 1992. He replaces long-time CEO Steve Ballmer.

“Satya is a proven leader with hard-core engineering skills, business vision and the ability to bring people together."

Microsoft has announced Indian-born Satya Nadella as its next Chief Executive. Satya joined Microsoft in 1992 and has since worked his way up to Microsoft’s head of Cloud and Enterprise.

After a painstaking five-month search by leading headhunters, which included some of the world’s most highly sought after executives, Satya was chosen to lead the company.

It was said that at one point there were almost 100 candidates and rumoured amongst them are CEO of Ford, Alan Mulally and CEO of Nokia, Stephen Elop.

Satya will be succeeding Steve Ballmer who announced in August last year that he will be stepping down from his position at Microsoft. 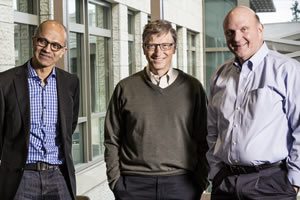 Microsoft founder and chairman Bill Gates also announced he is stepping down from his position as chairman, and independent director John Thompson will be taking over.

Bill Gates will assume the role of technology advisor and will be holding a seat on Microsoft’s board.

Satya makes history as being the first Indian CEO of technology giant Microsoft, and is the third person to be leading the company since it was founded in 1975.

Described as a man whose hobbies range from cricket to reading Indian and American poetry, analysts at FBR Capital Markets have called the decision to choose a CEO within the company a ‘safe pick’.

In an email to employees Satya states why he has chosen to work for Microsoft: “For the same reason I think most people join Microsoft – to change the world through technology that empowers people to do amazing things.

“Many companies aspire to change the world. But very few have all the elements required: talent, resources and perseverance. Microsoft has proven that it has all three in abundance.”

Satya Nadella, 46, was born in Hyderabad in India. He moved to the USA to complete a Masters in Science, and has since been working for Microsoft for 22 years. He has attained degrees in electronics, computer science and business administration.

Bill Gates approved of the announcement saying: “Satya is a proven leader with hard-core engineering skills, business vision and the ability to bring people together. His vision for how technology will be used and experienced around the world is exactly what Microsoft needs as the company enters its next chapter of expanded product innovation and growth.” 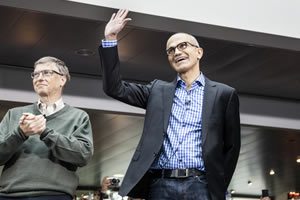 Although Satya may be little known outside of the walls of Microsoft, inside them he is famous. The new web page layout on the Microsoft website provides a girth of information for those seeking approval.

Leadership professor at Dartmouth’s Tuck School of Business, Sydney Finkelstein admitted there are huge challenges ahead for Satya, saying: “The next CEO needs to instil a level of risk-taking and innovation.”

Although some are questioning the new choice of Microsoft’s CEO, Staya’s previous role as head of Cloud and Enterprises proves he is capable.

He has helped to make this division one of the fastest growing in Microsoft, boosting its revenue by 107 per cent compared to the previous year. His expertise however is in serving corporate customers which provides two thirds of Microsoft’s profits.

Known to never be afraid to speak his mind, in the Le Web conference held in Paris last December, Satya spoke on the current issues regarding the NSA whistleblower Edward Snowden, saying: 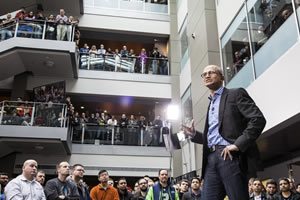 “Businesses and users are going to use technology only if they can trust it… the surveillance system has to be reformed.”

Speaking about his new position in Microsoft, Satya said: “I couldn’t be more honoured to have been chosen to lead the company.

“The opportunity ahead for Microsoft is vast, but to seize it, we must focus clearly, move faster and continue to transform. A big part of my job is to accelerate our ability to bring innovative products to our customers more quickly.

“We have tremendous opportunity and that’s exciting. And I’m also grounded on our challenges. In fact that is the adventure and the constraint that also creates, I think, the competitive zeal in me to be able to do great work.”

Without a doubt Satya’s promotion has encouraged many Indians and South Asians living abroad, who aspire to make it big in the West.

Although Satya has no experience of running a company, especially one as large as Microsoft, the only concern now is that Bill Gates and Steve Ballmer will still continue to input their influence into the company.

In a time where innovation and new challenges face technology, it is clear that Satya has a great deal of work ahead of him, and prove himself worthy of the role of CEO of Microsoft.

Wanderlust at heart, Fatimah is passionate about everything creative. She enjoys reading, writing and a good cup of tea. Her life motto is: “A day without laughter is a day wasted,” by Charlie Chaplin.
The Apple vs Android Smartphone battle
Anokhi Media celebrates 11th Anniversary