Shuddhi doesn’t seem to retire from the title of the ‘most-talked about film’ of 2014 and it surely won’t now, especially when it has made Salman Khan the highest paid actor of the B-town.

"Salman has asked for the entire first week's worldwide collection as part of his fee."

Salman has surely got his Eidi this year. As expected, the box-office must be exhausted after counting Kick’s weekend collection and now, thanks to the Eid holiday, there is a massive jump in Kick’s Tuesday collection as well.

Salman starrer Kick has done colossal business so far and not just has now crossed the popular but expected 100 crore mark, but also has become the highest grosser of 2014. 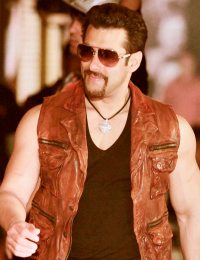 Since no other film is even daring to release in the week following a Salman release, the coming week too, will see Kick shattering the box-office.

Now, along with Kick, there is another reason why Salman can only hear Ka-ching this week! Why you ask?

Shuddhi has been the most discussed film of Karan Johar since he announced it. However it has had twists and turns, ups and downs even before it went on the floors.

The news in the last few weeks doing the rounds was that finally after many secret talks, Salman Khan has agreed to do the film. That news has already outmoded now!

Well if an SRK-loyalist (Karan Johar) wishes to work with an SRK arch-rival (Salman of course) he has to pay a price for it! Apparently the price is whooping 150 crores INR (£14.7 million).

An industry source has disclosed: “Firstly Salman has asked for the entire first week’s worldwide collection as part of his fee.

“Secondly, Salman asked and got 40 percent of the satellite rights of Shuddhi. And finally from the accrued profits of the film Salman will get 20 percent, while Dharma will walk away with 80 percent.”

All that sums up to incredible Rs.150 crores! So yes, you guessed it right! Now the news is that Salman is the highest paid actor in Bollywood till date.

The trade analyst Taran Adarsh has expressed his doubts, saying: “Actually it’s all between the producer and actor these days. But a 150 crore fee sounds too high to be true.” 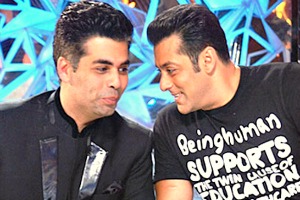 Earlier in July, Hrithik Roshan who was getting paid Rs 50 Crores (£4.9 million) to do Ashutosh Gowariker’s film Mohenjodaro , was named as the highest paid actor of Bollywood. However Salman has managed to beat him and that too by a gigantic difference.

Salman has taken not just the title from Hrithik but also the film Shuddhi.

For those who don’t know, Shuddhi was initially supposed to have the stars Hrithik Roshan and Kareena Kapoor-Khan in the lead. However due to Hrithik’s brain surgery, the movie was put on hold and shortly Hrithik walked out of the film citing date problems. As Kareena wanted to pair up with Hrithik and nobody else, she too walked out of the film.

The film then was offered to the lovebirds of the B-town, Deepika Padukone and Ranveer Singh. However, due to date problems, when the time came for them to choose between Karan’s Shuddhi and Sanjay Leela Bhansali’s Bajirao Mastani, the pair opted for the latter, leaving Karan Johar and Shuddhi all alone.

Finally, Karan managed to convince Salman Khan to act in his film. Sallu and KJo have worked together before in Kuch Kuch Hota Hai, wherein Sallu did a cameo. However since then, Salman has preferred to stay away from KJo, due to his strong connections with Shahrukh Khan.

But Sallu fans saw a new friendship brewing when he was invited onto the celebrity talk show, Koffee with Karan, instead of SRK. On the show, Salman was himself and was not scared to even sarcastically taunt Karan that Karan doesn’t want to work with him for obvious reasons (decoded as SRK-Karan friendship)!

After a few months, they met again on the sets of the dance show Jhalak Dikhlaja, where Sallu had come to promote Kick and KJo was the judge of the show. They got along well again and were seen sharing jokes and laughter.

Following that, Karan tweeted announcing that Salman Khan will be starring in Shuddhi putting all rumours to an end!

Now only time will tell if Salman is really getting paid the enormous 150 Cr! If yes, will he be donating the amount to his charitable trust Being Human, or will he dive into it like Uncle Scrooge?

Komal is a cinéaste, who believes she was born to love films. Apart from working as assistant Director in Bollywood, she finds herself doing photography or watching Simpsons. “All I have in life is my imagination and I love it that way!”
Bollywood Stars in America
SRK to SLAM in UK